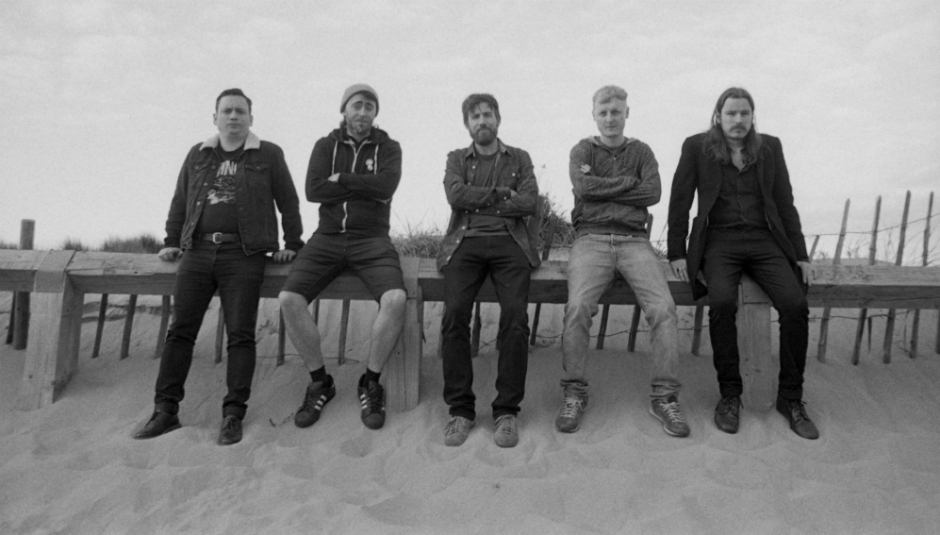 Heavy music has always been an outlier. Even when it has crashed into the mainstream by the sheer force of a riff so irresistible that even the most delicate of tastes succumb, it remains doggedly ‘other’. The successes of bands like Black Sabbath, in spite of gothic attire and flirtations with satanic imagery, while utterly valid, often feel like the establishment’s fleeting dalliance with the darkly exotic.

Broadly speaking, metal is often dished up in either an overtly theatrical or deeply serious way. Of course Sunn O))) brilliantly combine both and make the most intense brain scrambling and oddly meditative music in the process. But it’s certainly not for the faint of heart and, for some, either earnestness or camp posturing can act as a barrier.

“There’s one thing I like about our band, this sounds strange, but I’m gonna go there: aesthetically, we don’t really look like a band that makes the kind of music that we make, if you get me?”

So says Matt Bat,y lead vocalist of the preposterously named Pigsx7, and he’s right. When Pigs take to the stage there are neither robes nor spandex, long locks or flamboyant facial hair. The five men that make up the band all have relatively neat haircuts, granted a few modest beards, and not a shade of gothic attire. In fact, they’re more likely to be sporting a Newcastle United t-shirt.

Admittedly, frontman Matt regularly performs sans top. But even then, it’s a world away from a chest-beating show of masculinity. It’s actually quite hard to put your finger on what impression it does elicit.

“It feels a little out of the ordinary” Matt offers.

Yes, yes it does.

While his very physical, shirtless, roaring stage presence has its origins in an overly hot practice room, and in making the transition from drummer to singer (he still regularly drums for Richard Dawson), he also recognises it’s a reaction to the traditionally virile world of hard rock and metal.

“I’m absolutely incapable of growing facial hair and also chest hair; I’m so smooth on my chest, there’s something about that I quite like” he explains with a chuckle. But it was initially born out of insecurities that arose as beards became not only fashionable but also a badge of masculinity: “The tops off thing now feels like a middle finger to that. It worked it’s way into lyrics in the first album as well, there were little bits and pieces that touched on - what’s the phrase that gets used a lot at the moment? - toxic masculinity… I do a lot of flexing on stage. It’s in jest and it’s to make a point about that kind of mentality.”

However out of the ordinary Pigsx7 might at first appear, the release of their second record King Of Cowards has seen them rise from their underground origins and poke their snouts into the mainstream with BBC 6 Music making it Album of the Day after its release back in September.

Matt: “I think it’s fair to say we weren’t expecting anywhere near the reaction that it’s had, but that’s good and we’ll certainly take it and just ride on it I suppose.”

While the album retains the heaviness and deep psych rumblings of their 2017 debut Feed The Rats, it does offer up a few more compact tracks like lead single ‘Cake Of Light.’ For guitarist Adam Sykes, it was a shift that did raise a little trepidation. “Speaking for myself, I did worry about the track lengths being shorter. Not so much worried, but I did expect more criticism that maybe it was intentional and cynical, but certainly we haven’t had any of those accusations, at least not to our faces.”

Underground music and widely acknowledged success have always made for tricky bedfellows, but it’s an assumed conflict that the band seem to wear lightly. “In a way, had we felt we were under pressure to stick with really long songs against a judgement of wanting to have a pop a writing some shorter songs, that would be a compromise as well. It is what it is. We’ve just done it and I certainly don’t feel like we’ve compromised at all” explains Matt.

The gestation of the record gives a truer insight into how some of the album’s tracks are more clipped than their predecessors. The band began writing the album last year at an Airbnb in rural Italy during a gap in touring, and whereas before, “Playing live we’d slowly just add the riff, add another riff, add another riff, and we wouldn’t really stop ourselves” as Adam explains, a lack of distractions along with self-imposed time constraints shaped more focused writing.

Adam: “No it was in… the area was used as hunting grounds.”

Adam: “For boar and things. They were just an eccentric couple I think. So we spent a lot of time in an incredible house.”

Matt: “We just bought loads of food in and stuff and were able to get up in the morning and just crack on till early evening. The amount of writing we got done there probably would have taken us months and months had we done it in Newcastle. It was great, it was perfect really.”

As Matt says, the result is what it is. And that is a heavy rock record that, for whatever reason, (most likely, and simplistically, because it’s very very good) seems to be finding a growing audience and its fair share of radio play, which Adam concedes has, “been a nice outcome, a nice byproduct.”

“Yeah that’s true”, Matt adds. “I mean don’t get me wrong, the 6 Music thing has been amazing. It’s been noticeable, the result of their support, it really has.”

Yet radio plays and stats aside, while the band are clearly enjoying the increased visibility their ambitions are modest and admirable.

Matt: “For me, the best thing any band or artist can do, to me it feels almost failsafe, is playing live gigs and making sure your live performances are the best they can possibly be. Just go out and play, just play in front of people. Go to different places if you can and play.”

Adam: “That’s really our only ambition, what we're doing now. We don’t have a huge expectation or desire. There’s nothing there that we’re really pushing towards beyond being able to play really good fun gigs and enjoy it. You certainly don’t have to compromise to do that.”

Pleasure is something that Pigs seem to transmit and receive in equal measure, and not in the Mötley Crüe sense of the word. Their music conjures a genuine delight that is perhaps at odds with the more poe-faced sides of heavy music, and something the band appreciates. “To an extent, I think when you have something as loud [as our music] it requires a lot from the listener, an energy. I think when you make music like that there needs to be a bit of levity in there” says Adam of its vivacity.

But Matt’s equally keen to defend the darker side of the genre: “I’m into really extreme and left-field stuff, but I’ve always caught a positive buzz from it. Even going to watch the bleakest of bands like Khanate. They make the most hideous, depressing, challenging metal music that I’d ever heard, but you come away from it feeling almost enlightened in a way [laughs]. It’s certainly cathartic, and any form of catharsis will make you feel good. It’s a release of steam, and I think that’s something that all of us recognise. We all recognise that rock music is there to make you feel good.”

So often in our culture unadulterated pleasure is coloured by a sense of regret. Lyrically King Of Cowards is flooded with illusions of illusions to sin and guilt. What’s the fascination?

The lead singer explains his writing process isn’t entirely conventional, that he’s not one to sit at a desk with a pen, paper, and a preset agenda. “I don’t know why, whether it’s because I’ve got a very poor attention span and I get distracted or, I don’t know, it doesn’t feel very wholesome to me.” Instead, he takes an on-the-hoof approach alongside his bandmates: “When the guys are working out new ideas in the practice room and playing really really loud I tend to just open up my chest and go at it with my voice and try and keep up with the volume.”

As for the themes that arose from these developments, he confesses, “I must say I wasn’t surprised by it. Guilt is something that hangs heavy on my shoulders sometimes, and I know that it’s not always rational thoughts that are bringing that…. It made me think a lot about the schemas where guilt can be created and manipulated and used to control people.”

Pigs’ music feels like the antithesis of that premise. Both on record and on stage they offer their listeners the opportunity to lose themselves in the amusements they generate and to snatch precious, guilt-free moments. Such rare gratification is sure to make you ravenous for more, even if they’ve only just released a brand new set of songs. Happily, their minds also wander towards new material.

Adam: “We’ve got some new ideas already and I think the more you play, and play the same tracks, the more you want to write new stuff.”

Matt: “Just music in general, performing it live or making it, it’s all positive stuff. So, when you’re not playing live [I think]: 'Let’s go make some music' because it’s enjoyable and people should do enjoyable things. It might not be too long before we get something new out… maybe.”

The pursuit of pleasure is a premise Pigs seem to embrace wholeheartedly, and it comes from a thoughtful place. There’s no shame in being greedy for the things that you love and make you smile.

Even if it is thumb sucking… maybe.