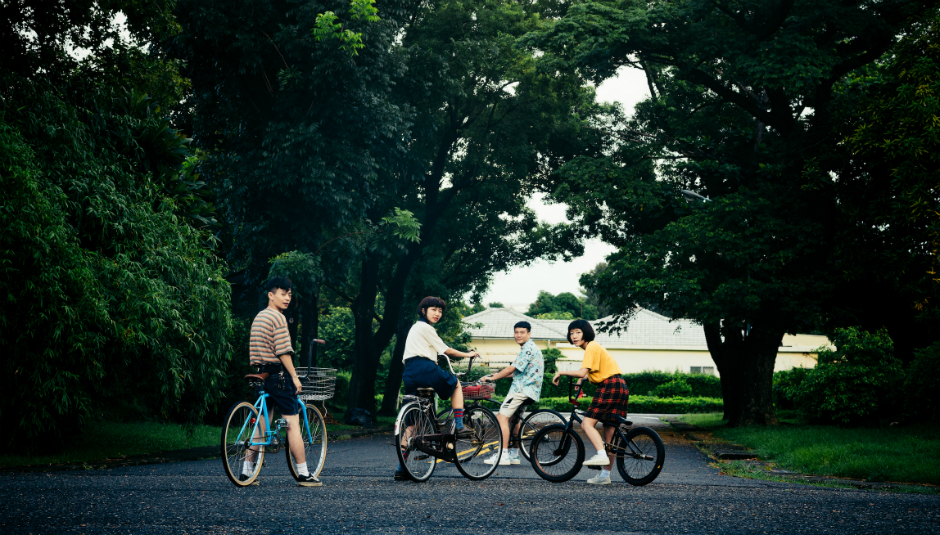 This here scribe immediately took a shine to The Fur. (with a period in the end, yes) last summer, when Motel Mozaique’s artistic leader Harry Hamelink did an impromptu showcase at Rotterdam’s DIY venue Roodkapje. It featuring two radically different bands he discovered at a festival held on the island of Taiwan. One of them was Outlet Drift, who combine 70s psychedelic sounds with homegrown influences in a fascinating way. While their show was rousing and extrovert, I zeroed in a little more on the shoe-staring, demure kids who opened the night.

The Fur.’s winsome concoction of dreamy synth-pop and indie rock initially strikes the listener as tongue-in-cheek and fun. Yu Wen Liao (Savanna), Jhong Ling Wu (Zero), Wei Ren Wang (Ren), Fang Yu Lin (Wen Wen) seem like the group of childhood friends who would rather spend their semesters adrift in reverie on the sun-kissed beaches of their hometown of Kaohsiung. Living on an island in this hyperconnected world might spark that sense of wanderlust even more. And what better way to see the world than to start a band?

The foursome made good on that promise with an extensive European tour, not just stopping by at Roodkapje, but also playing Primavera Sound. And next year, The Fur. are headed to SXSW, so it’s safe to assume more people becoming as endeared with this bunch as me. Giving debut LP Town a spin will introduce you to some bona fide pop bangers, like the sultry ‘Short Stay’ and the 80s Fleetwood Mac-like swerve of ‘We Can Dance’, but beneath their music’s wide-eyed levity simmers a wistful melancholia that doesn’t shy away from the occasional dark twist.

We link up with the band via e-mail to learn more. A conversation that veers between coming-of-age stories, hometown ennui, a massive earthquake, and expressing toxic relationships through the allegory of a clinically depressed, furry creature who goes by the name of Terry.

DiS: Can you summarize how The Fur. came to be a band?

The Fur.: Savanna and Zero were college friends, working together and producing ‘Final Defense’ back in late 2016. Soon after, they received concert invitations and from there, decided to ask Ren to join in as the bassist. It only took him thirty seconds to say yes. In 2018, we met Wen Wen through a mutual friend, and we asked if she wanted to join the band as the keyboardist. We were at a café and it only took her ten seconds to say yes.

Town recollects memories of growing up. These memories recall the first times you need to respect when people choose to leave and say goodbye. When you realize the truth and have to leave the story behind. But also the need to be encouraged, to figure out how to calm yourself down and reflect on things you’ve been through. The memories are still fresh, especially once people revisit the places they grow up in. And it is neither positive nor negative: just about being touched, which is what we would like to present on Town.

The video for ‘We Can Dance’ takes on a surprisingly dark turn, at least that’s what I make of it. Can you talk me through the general concept of it?

People dancing together can mean that their struggles are fully solved, but the concept of ‘'We Can Dance' is a total contrary. In the song, the act of dance is the final result of an endless conflict, it represents the feeling of helplessness and the devastation of one's mind covered by joy. Director Phoebe Lu wrote the script for the video, and I never explained the concept to her. But I think the video is presented the way it should be presented.

The songs on 'Town' sound so immediately dulcet and pleasing to the ear. How does that sheer pop levity equate to your personalities? Is it a sly contrast to something darker, or more of a way to channel a sense of enthusiasm and joy?

Savanna composed all the songs on Town and I think the process is more emotional than rational. Zero plays a vital role: how each song should be articulated naturally, adding pleasing atmospherics, which is how people seem to perceive The Fur. on first impression. We think our music does contain a hidden contrast if people listen carefully, but that contrast is more like a beautiful coincidence. We love to do such things in our songs.

When I listened to the album on the train I suddenly zoned in on the lyrics for 'Little Song', the part with the "broken people all around". Was there a specific event that triggered this particular song? It does sketch a pretty dour scene, with the answering machine message bookending things.

This song is about hope, it doesn't spring from any particular event. But this question does bring me back to the memory of the earthquake that happened on 21 September 1999 in Taiwan. We all experienced the 921 Earthquake when we were little and survived from some of the severely hit areas. The most touching part is that people were able to crawl out of damaged buildings after being buried under rubble for six days.

The video for ‘Short Stay’ also seems to illustrate this idea of lost innocence. This furry alien monster in it seems to cope with a severe depression. I thought it was quite moving: depression can make you feel a bit like a monster, someone who feels unwanted. It makes me wonder, what’s the song about exactly?

It’s always interesting to see how people interpret the connection between the song and the video. We told people that ‘Terry’, the monster in the video, represents a transformation from ‘your ideal life’. Of course, the lyrics are just murmuring time units, asking someone to come back to be together again. But what if your ‘ideal life’ of spending time with someone is like ‘a depressed monster’ who always gets drunk and goes missing? The video tells the answer. We end up finding Terry and bring him back home, trying everything to wake him up.

Can you tell me a bit about the overall recording process behind Town?

‘We Can Dance’ was the first track we finished recording, back in July 2017. Later we recorded other songs up until 2018 including our trip to the EU and UK. It’s been quite a process because we didn’t work with professional studios. We spent lots of time to find adequate technical support from our friends and build our own recording space at home. We learned a lot of things together through the process of producing our first album. Especially from one important friend of ours, Patrick Fang. He is the recording engineer who also starred as ‘Terry’ in the ‘Short Stay’ music video.

How did the Conehead remix of ‘We Can Dance’ come into fruition?

Conehead is a cool artist based in Taiwan; he plays electronic, boom bap, experimental hip-hop, lo-fi, ambient, field recordings, and so forth. We discovered him through our label Airhead Records and decided to work together. We especially include the remix of ‘We Can Dance’ for the release of Town in Japan.

You did an elaborate European tour, including Primavera Sound. Did you perceive it as a big culture shock, or were you more surprised by the similarities with the music scene back home? What are some of your favourite memories?

Primavera Sound was an eye-opener. This was the first time that all of us visited Europe. We did experience lots of cultural differences and some lost in translation moments, but luckily people we met were all friendly and understanding. We adapted to it very well. Comparing the music scenes between two sides, I would say it’s entirely different. For Europe, I think there are more venues than in Taiwan and people are more willing to see live music as a daily activity. It’s also easier to see bands you love in Europe and less in Taiwan. We almost got to see The Jesus and Mary Chain in Rotterdam, as the venue ‘Maassilo’ was super close to the hotel we stayed. However, we all agree that the music scene in Taiwan is improving and growing, which is great.

Speaking of that, is there a fertile music scene in Kaohsiung? What kind of infrastructure and music venues can you find there? Are there other acquainted bands you would like to recommend?

Kaohsiung is the city we live in, it’s located in the Southern part of Taiwan, by the sea. It gets very hot during the summer, but comfortable in winter. Kaohsiung has fewer venues and audiences compared to the capital city of Taipei. But there’s a famous venue called Livewarehouse, it has 200 and 1500 capacity venues. There is another one called Paramount Bar, with a capacity of 80, where people can see Taiwanese indie bands visiting Kaohsiung. I wouldn’t say there is a fertile music scene at this point but I do think the indie music community here is very strong, warm and friendly. It’s been an incredible journey since we started The Fur. and being part of this community in Taiwan. Sunset Rollercoaster is our favourite Taiwanese band. We recommend Sunset Rollercoaster to everyone on earth, although many people know them. They play a beautiful mixture of soul, funk, jazz, and disco, which is very enjoyable to listen to.

Town is out now via Airhead Recordings. For more info on The Fur., please visit their Bandcamp page.