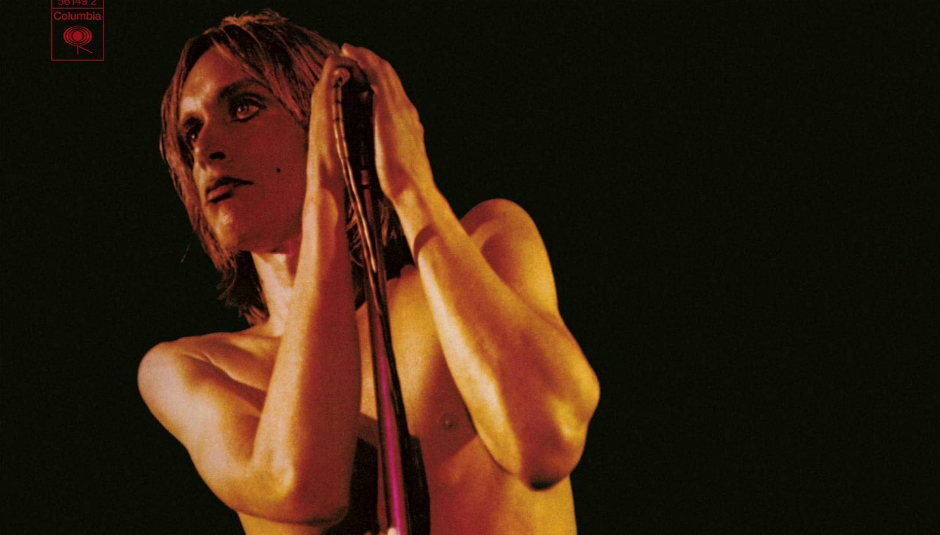 The Fangasm: Raw Power by The Stooges

Album covers may not have the power and romantic grace they once did, when they sat on your coffee table and under your ashtray and morning paper; an ever-present piece of art tied to memories of late nights and long dreamy afternoons. But I’ll never forget the first time I saw Raw Power in the dusty window of Vinyl Exchange in Manchester Piccadilly. Bathed in red-orange light behind a pitch black backdrop, the defiant glare and imperious pose of Iggy Pop instantly connected with me. Topless and wearing thick eyeliner and red leather trousers, he looked like some kind of hellish god. This image led me through a new unholy door, changing how I dressed, how I played the guitar and the content of my daydreams as I sat in early morning lectures nursing grisly hangovers. It felt like I’d been tapped on the shoulder and shown a different world.

Released in 1973, this is a record that invites you down the black stone spiral staircase, a nose turned up to the white clouds and heavenly pastures of hippies and 60’s soft rock, and into the depths of the underworld. Within its walls lie "street walking cheetahs", "the living dead", "sick boys" and "savage girls", and a carefree aggression that makes you feel 10 feet tall and bursting with carnal vitality. A window into our most base urges, it reflects the darker side of our primal needs and desires, long before the preachings of Tyler Durden. It embodies a rebellious spirit that rejects the brutish hegemony of monoculture and mono ways of being, holding an unapologetic disdain for the conformity and sterility that had come to plague society. This is where many say punk was born.

The early 70’s was a time of great uncertainty for The Stooges of Detroit: following the commercial failings of their second album Fun House, they had sunk into an ever deepening abyss of drug addiction, which began to mar and rot their once renowned live performances, now barely able to keep to basic rhythms. Like so many others, this story was very nearly cut short by the scourge of heroin. Fortunately, a chance meeting between David Bowie and Iggy in a New York nightclub changed the tide. Bowie, being an avid Stooges fan, confronted Iggy, cajoling him to quit his addictions and make a new record in England. Iggy accepted, and this quirk of fate set the pieces moving for Raw Power’s creation. With Bowie’s blessing, they signed to his management firm and acquired a record deal with Columbia Records: finally the canvas was positioned for new ideas and a raw rebirth.

Out of this precarious crevice The Stooges crawled out and unearthed a mind blowing piece of art. As soon as you lie down the needle you’re shot out of a cannon to hell by the introductory James Williamson riff, which sets the ferocious tone in the first 15 seconds of ‘Search and Destroy,’ soaring you off into the sky like an out of control jet plane. The brevity of Iggy’s growls and the hammering rhythm section compounds this blistering tempo, whilst its lyrics critiquing the heartless folly of the Vietnam war introduces Raw Power’s stark, nihilist lexicon. A cocaine hit of a song, it’s both euphoric and morose, and within it you have all the fundamental ingredients of punk.

Second track ‘Gimme Danger’ is equally sinister and mighty, but at a steadier, more foreboding pace, with a seductive rhythm you can sink deep into. This is one for lighting a candle, cutting the lights and letting the hypnotic sounds sail you down the river Styx. Gradually its momentum and rage builds until you’re sent careening down the rapids, as Iggy’s elongated cries of "Daaaaaaangerrrr" stretch over Williamson’s free and monstrous riffs, creating an electrifying climax of extreme sonic bliss. From the first time I heard it I knew I’d fallen in love with this band.

‘Your Pretty Face Is Going To Hell’ and ‘Penetration’ take us on a ride through the icky bile of lust, with song titles that stick two fingers up to the pansy, ball-less ballads that plagued the billboards of the day (see The Bee Gees’ ‘How Can You Mend A Broken Heart,’ or The Osmonds’ ‘Be My Little Baby Bumblebee.’ And try not to puke.). The vigour of ‘Your Pretty Face…’ and the deviant tone of ‘Penetration’ perfectly suits this subject matter, reflecting how sexuality can manifest itself in messy, strange and primal ways, which plays a part in its raw excitement. "Hallucination, true romance / I needed love but I lost my pants" - what better antidote to Donny Osmond could you hope for? Iggy’s vocal spontaneity and playfulness in ‘Penetration’ further attests to how this record exposes elements of the human psyche and temperament that had rarely been present in music before. Anchored around a hypnotic xylophone melody, Iggy’s animalistic cries and bizarre, psychotic noises stretch the boundaries of perception, like walking down the hall of a mental asylum.

Within the title track lies some of the most lyrically intriguing parts of the record. Here Iggy delves into the meaning of the phrase ‘Raw Power’ and the album as a whole, like he’s taking a step back midway through to reflect on this world they’re creating. Arguably this is the first ever description of punk, or at least proto-punk, written before either had been named. It’s both "a-much too much" and "can destroy a man", whilst its also "got a healing hand" and will run to you when "you’re alone and you’ve got the shakes". This attests both to the rage of punk and to how it spoke to the lost, the misfits and the outcasts, which also relates to how the word was initially pejorative. Moreover, "Don’t you try to tell me what to do" succinctly captures the rebellion and anti-establishment attitude that defined the genre. This may be as close as punk gets to having a founding text.

Next comes ‘I Need Somebody,’ with one of the most menacing and insidious rhythms ever recorded. It makes the skin crawl, rattles the rib cage and gets right up the spine, with Iggy and Williamson’s Gibson Les Paul calling and replying to each other like a hunter and his hound. ‘Shake Appeal’ shakes and writhes like a 50’s rock'n'roll song made in hell - Iggy has said it’s the closest he’ll ever get to “being Little Richard for a minute.” To everyone’s surprise, it’s another 3 minutes of him singing about sex.

‘Death Trip’ closes the record with a sombre tone, as amongst the chaotic distortion and psychotic cries Iggy laments the road to destruction he believes the band are on. He was right, as The Stooges split up only a year after the record’s release, though the tongue in cheek line "We’re going down in history" meant to allude to their inevitable demise, now seems like a prophetic prediction of the seismic influence this album would have. 37 years after its release, The Stooges were finally inducted into the Rock’n’roll Hall of Fame in 2010.

Above all, this is a record that makes you feel free. Genres are defined by feeling and words can only go so far in capturing their essence, but ultimately at the heart of punk is the very human need to dissent, and to push against the bars of the cages modern society puts us in. The cynic will sneer and point to how little punk actually affected political change, and the greed and ego that its protagonists became tainted by. Yet this perspective fails to consider the escapism, joy and inspiration it provided to so many in times of isolation and perpetual winter. Although this record inhabits a desolate world full of bile, blood, and fatalism, to the right listener this doesn’t instil hopelessness and horror. Rather, it warms the cold bones and rouses the lost spirit, calling out to those who find modern society constricting and ill-fitting, and most popular music superficial, feeble and heartless. Here, instead, is a sonic world where our primal compulsions are expressed, where our passions are hot and raw, and where we can run free and wild until the dead of night. Come and join me and explore the vast, visceral world that is Raw Power.