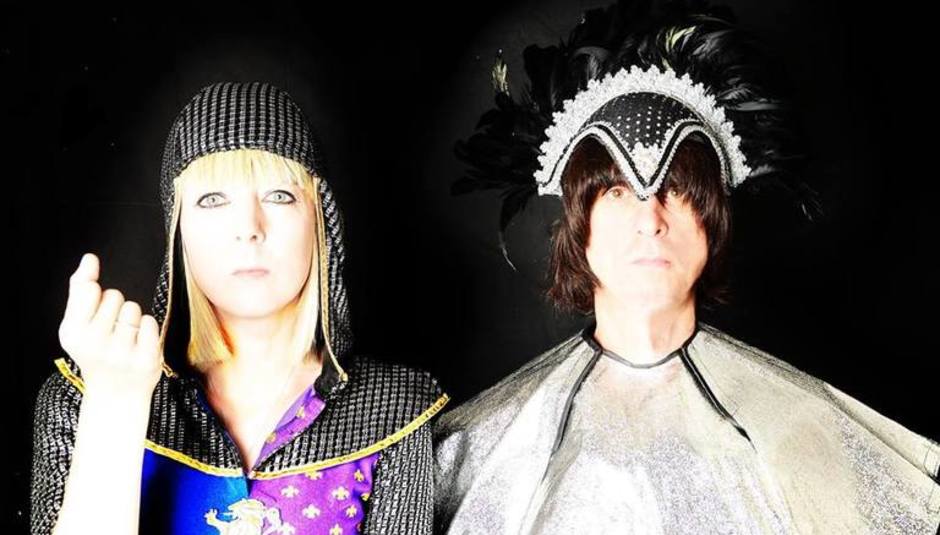 Married couple Holly Ross and David Blackwell are The Lovely Eggs and they're arguably the loudest thing to come out of Lancaster in its entire history. Having formed in 2006 over a shared love of psychedelic noise pop and bands like Prolapse, the duo have since gone on to release five critically acclaimed albums alongside a plethora of equally well-received singles and EPs.

Over that time, they've amassed a rabid fanbase that's ever-growing by the day, mostly via word of mouth and an ethos that's seen them play any time, any place, anywhere, often playing two shows or more in one day whilst also staying behind to interact with fans either from the stand or at the merch stand afterwards.

It's this level of interaction that's undoubtedly at the forefront of their growing popularity, as is their willingness to play at every festival under the sun if they'll book them. In the last two months alone, DiS has caught them at Long Division, Indietracks, Rebellion, and Green Man.

We caught up with them after their set at Blackpool's Rebellion festival and discovered their endearing spirit is anything but an act. For real.

DiS: You're playing a lot of festivals this summer such as Long Division, Indietracks, and Rebellion, which both attract audiences from different ends of the musical spectrum. How do those events differ from other ones on the circuit?

Holly Ross: We've played Indietracks numerous times, but when we came to Rebellion we had no idea what it would be like. Yet we felt more at home than I ever thought we would. It's full of alternative people. Where the fuck have they been since 1994!

David Blackwell: If these people have been here all this time we want to move there! Maybe they all live in Blackpool?

HR: We were here in the nineties but then they all disappeared.

What about your hometown of Lancaster. Is there much of a scene there?

HR: There is a bit of a scene there. There has been for a while, it's just no one ever hears about it.

DB: Preston had a great scene many years ago.

HR: Lancaster isn't bad now as long as you keep clear of all the bullshit, which we do.

DB: It's where we come from so there'll always be something special about the place to us.

HR: You just have to find it first.

The Lovely Eggs' popularity has grown considerably over the past few years. I remember you saying at Indietracks the other week you'd now played on all four stages after headlining the first night. Do you envisage the band becoming even bigger in the future?

HR: I don't know. It's a nice feeling that more people are listening to our music but we don't really think about stuff like that too much. We didn't start this band to see how big we could get. We started it because we love making music and that's never changed. If people get it and like it that's nice, but it's ultimately up to them.

Since your latest album This Is Eggland came out in February to widespread critical acclaim the band's profile has risen considerably.

HR: Being based in Lancaster we never get to see any of these things, or maybe we just don't pay attention? We don't look at our press that much, so apart from people coming up to us in the street or at gigs and saying they like our music or recognise we aren't really aware of any of that.

Your music crosses so many different genres in terms of style and sound. If you had to pigeonhole The Lovely Eggs to any one specific genre, what would it be?

DB: I'd say we're punk in spirit but the music has nothing to do with that. We just play whatever comes out. There's been loads of great music in the history of music and we're big fans of lots of that. From punk to jazz to psychedelic to rock, whatever. We're punk at heart because that really means something to us, but that's not necessarily about our music - it's about independence and being individual. It's quite important because people follow too many people and try and copy them. Don't copy anybody! Be inspired by people but don't copy them.

HR: Counter-punks then! Some people call us indie but I think we have quite an aggressive sound, so I'm not sure I agree with that.

I see a lot of parallels between you and Idles in that both bands have been making music on your own terms for a number of years, both are very socially and politically aware, and both have amassed a growing legion of fans mostly via word of mouth and a relentless live schedule.

HR: I think we both have a similar connection between ourselves and the fans and that's what attracts people to what we do. What's made us successful is people coming to our gigs, buying our music and merchandise then telling their friends who then come along next time round. We haven't got a record deal yet those fans have still got behind us regardless. They believe in what we believe in.

HR: Massively real. We can't be any other way but real because we don't know anyone. We have no connections, we haven't got any money, we have no label.

Your fanbase also crosses every generation and demographic, from young kids to retired pensioners in their sixties and seventies.

HR: We love that our music appeals to so many different people. I see couples bringing their kids and think what are you gonna be doing when you're 15? Some people call our music family friendly but subversive, and we won't change who or how we are for anyone.

DB: I think we are subversive but not in an aggressive way. It feels like we have our own language and once you've learned that, you're fine. That's how we feel about it, even if we do swear a lot.

HR: We play a lot of shows in the daytime in front of families with young kids and they seem to get it.

Now things are moving rapidly and the band's profile is growing, would you consider tailoring your sets for different audiences in the future?

HR: No. The only thing we'll do if we have a daytime slot at a festival is not play 'Fuck It'. If it's past eight o'clock at night then we'll play full on. Ultimately we're doing it for us. We're doing it for the fans as well, but even if they still love it and we stop enjoying it that's it. That's the point where we'd stop.

DB: If you want to play music, just play music any time you can. That's all we've ever done.

HR: You should never go into music thinking you can do it as a career because it really doesn't work like that.

When the band first started out in 2006, did you think you'd be here 12 years and five albums later talking about the future?

DB: Absolutely not! We formed this band to just play music and travel around. There was no agenda at all. We love what we do. Playing shows in as many places as possible and meeting new people. That's life, isn't it!

Do you think The Lovely Eggs have redefined people's opinions of two-piece bands after the mid-2000s onslaught of duos that followed in The White Stripes' wake?

DB: The amount of people in your band has got nothing to do with it. You might want to recreate an orchestral sound on your own.

HR: It shouldn't matter whether there are two people, four, or twenty.

DB: We always wanted this band to be loud because we like loud music. That was always something we wanted to do whether it was just me and Holly or if anyone else joined the band. We didn't know it was going to be as loud. Our first album has moments of loudness but sounds quite tame compared to our later stuff.

HR: But then that's the freedom with each album we do. We've never thought about sticking to a formula or one particular sound. I think not having a label helps give us that freedom to try new things on every record.

Have you ever thought about signing to a label? I imagine you've had a lot of interest in recent years.

HR: No, never. All we have is Lucy from But I Like You doing our press. Everything else we do ourselves. We don't have a booking agent and haven't really been approached by any labels. We sort everything out from booking tours and festivals to the artwork on our records to the recordings themselves.

So it's a proper DIY aesthetic, in its truest sense?

DB: Everything goes off on the kitchen table!

HR: We've been doing this for twelve years so we're used to it by now. When you've done a 21 date tour of America and only had a beach towel to sleep on - we had nowhere to sleep every night...

DB: The band we toured with were meant to sort it out but didn't, so they ended up asking people from the stage every night if anyone could give us a bed after the show!

HR: By the end of the tour that beach towel was minging. We got drunk every night just to get ourselves to sleep.

DB: That was some heavy drinking!

Was there ever a point when you thought about calling it a day with the band and doing something else?

DB: Yes, after those 21 nights! On the way back home. That was tough, really tough. But then looking back on it, that tour was fucking brilliant!

Are there any new bands you'd recommend for Drowned In Sound and its readers to check out?

HR: I really like this band from Leeds called Cattle. They're great. Also a band called Mush. They're also from Leeds. Wand as well. They're quite psych sounding but very heavy. We're really into a lot of that stuff.

DB: It changes all the time. If you ask us next week we'll probably think of someone else!

This Is Eggland is out now. For more information on The Lovely Eggs, including forthcoming tour dates, please visit their official website.