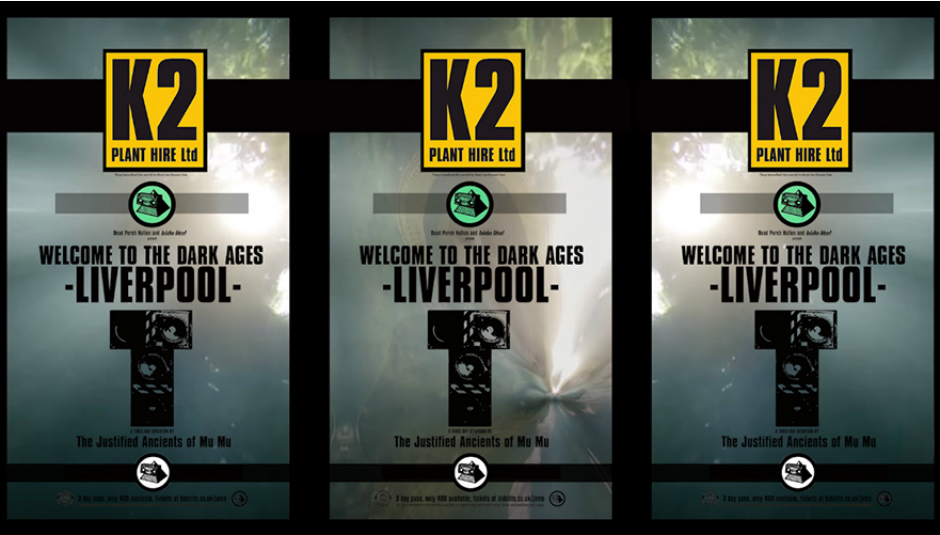 When was the last time you celebrated the time 00:00:23? Hundreds of us are gathered outside Liverpool’s fabulous News From Nowhere book shop tonight under the cloak of night, united by a combination of intrigue and excitement. We all anxiously glance at our watches, waiting for this most ludicrous of time stamps. It’s absurd on the surface, but far stranger once you know why.

Bill Drummond and Jimmy Cauty have been planning this hyper-accurate shindig for exactly 23 years. On 23 August 1994, they famously took to the Scottish isle of Jura to burn one million pounds sterling of the money raised by their era-defining, groundbreaking art-rave-pop project The KLF. It was to be their departing act, a final middle finger in a career that refused to acknowledge the rules. That day, Drummond declared that in 23 years’ time, they would return to explain why they were doing it. Lo and behold, here we are.

So much of the iconography and philosophy of The KLF derives from ‘The Illuminatus! Trilogy’ by Robert Shea and Robert Anton Wilson, a 1975 postmodern dystopian trilogy that messes with the conventions of conspiracy theories. Amongst the most influential ideas to emanate from the trilogy is that of ‘discordianism’, the paradigm that argues that by blurring the line between fact and fiction, it can become impossible to control the flow of truth. Anyone who saw Adam Curtis’ ‘Hypernormalisation’ will remember his terrifying argument that this so-called ‘Operation Mindfuck’ strategy is one to which the current Russian regime is in thrall. Perhaps they were just KLF fans.

Numerology is central to the Illuminati stories too. The 23 enigma is now well established all over modern literature and culture, with William S. Burroughs often credited as its dastardly originator. So much of The KLF’s career map has the number written all over it, and so, 23 years to the second after the 23rd day of August 1994, at 23 seconds after midnight, they are staging the most elaborate, gloriously pretentious and most KLF of all pop music comebacks.

Sensationally on time, their appearance is briefly preceded by the sound of an oncoming ice cream van, their chosen mode of transport back in the day (well, ever since discarding the Ford Timelord that was central to their first hit, ‘Doctorin’ The Tardis’). The chimes ring out to the sound of an unlikely mashup of ‘O Sole Mio’ and ‘3AM Eternal’ as the sizeable queue erupts into a cheer that conveys nearly as much relief that we haven’t fallen for an elaborate prank as it does genuine excitement to see such an iconic duo resurrected.

The state of Drummond and Cauty is significantly better weathered than that of the van, it must be said, which is creaking and crumbling. It appears to have a coffin in its back too, but nothing seems that weird anymore. Beforehand, we had been handed a poster of rules of engagement for their arrival – “Kissing is tolerated but strictly no tongues” and “Do not attempt to take a selfie with any of the JAMs or with anyone else ever again” being just two of them. In truth, the assembled crowd is unlikely to cause trouble, just eager to get their hands on the first new KLF material in nearly a quarter of a century.

The new material is not, however, music. It is – what would you know – a dystopian trilogy, an “end of days story” we are told. It goes by the name of ‘2023: A Trilogy’ and it is now available to the world via Faber & Faber. The race to decode its dense allegories is on, and the headstart is with those of us in attendance tonight. Drummond and Cauty are on hand to stamp – not sign – these first editions, nestled in the rear end of the store, unassuming presences in real life, unshielded but for a standard desk. The stamps themselves are enjoyable antagonistic – mine read “Starbucks: War Is Over” – but in truth, the event was curiously straightforward in the end.

The antics continue though. Three days of fun follow this around the city of Liverpool, under the collective banner of ‘Welcome To The Dark Ages’. It is due to involve 400 fans only, described instead by the enigmatic press releases as volunteers, who will be expected to partake in all sorts of live action shenanigans no doubt. The KLF are back and their senses of humour and anarchy appear to be undiminished by time. Watch this space.