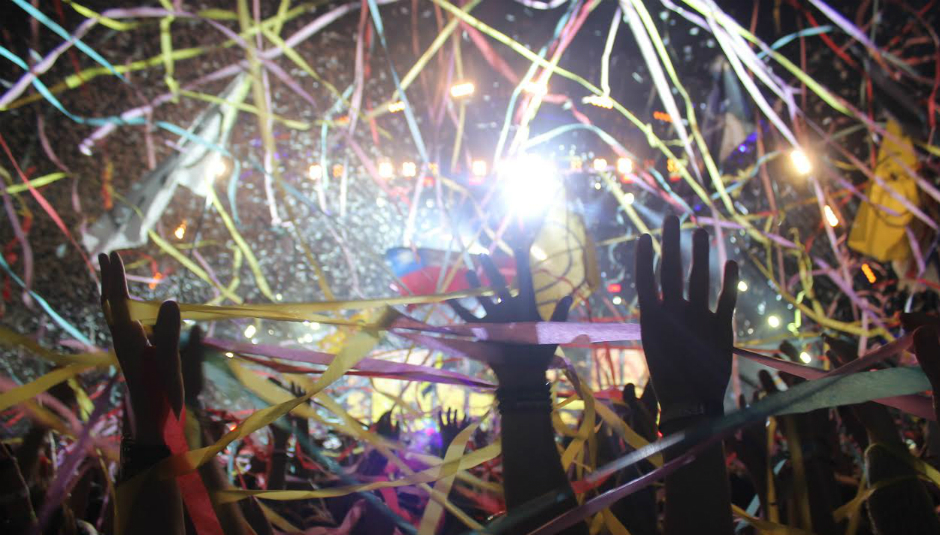 Last year, whilst struggling our way through a Sunday morning at Glastonbury, we decided that it was high time the festival had its own Awards Ceremony. “Hang on…a festival held on Worthy Farm…could we call the awards ’The Worthys’…?” And so a review framework with potentially only a one-year lifespan was born. Here is a rundown of all the things that really demanded our praise in the aftermath of Glastonbury 2016.

From the conversations we have throughout the weekend, it doesn’t feel like too much of an exaggeration to suggest there may be a very clear, acrimonious divide amongst Glastonbury-goers: those that are looking forward to a nice little bit of Coldplay on a Sunday night, and those who would rather look forward to anything else.

It’s perhaps generous on the part of the band then to have undertaken the presumably not-inconsiderable logistical challenge, and estimated £300,000 cost of distributing some 100,000 of their flashing ‘Xyloband’ wristbands to the audience before their show. Unlike other regular shows on the Coldplay tour, afterwards the wristbands keep flashing in sync with each other right through the rest of the night, as people wander off around the rest of the site. As people head to their various late night discos, then, many start thinking about finding romance in the early hours of their final night at Glastonbury.

At previous editions of the festival, it’s been far too easy to wake up in someone else’s tent, make idle morning-after small talk, and then realise all too late that actually, they adore Coldplay. Similarly, for too long the band’s fans have had to cope with the misery of finding out they’ve accidentally become romantically involved with someone who doesn’t share their love of the globetrotting four-piece. For one night only, as you look out over the all the afterhours venues of Glastonbury, Coldplay have had the decency to label their fans for you. Those that hold rather more extreme views are even able to choose not to come within 50 meters of a Coldplay fan, if that was indeed their wish. It’s an advancement the whole festival will no doubt miss next year.

Shibusashirazu Orchestra’s show forms the centrepiece of an ace run of Saturday afternoon shows on the West Holts stage (also featuring Mbongwana Star and The Very Best). When you see an act with some 23 performers on stage, a cynically minded festival-goer might suggest there’s a slight whiff of ‘Oh, let’s see just how many more of our mates we can get into the festival’ about proceedings. So alongside the Japanese jazz orchestra’s 15-odd instrument players, we also get two women dancing with giant bananas for the entirety of the show, a live painting exercise that by the end of the set has grown the full height of the stage, and a not inconsiderable amount of interpretive dancers in their pants. The music itself has no problem gradually building and experimenting its way through several movements – one track is a full 30 minutes long – and it’s all just the kind of mad, fully danceable spectacle you could hope for midway through a festival.

You likely don’t need informing that events in the wider world are weighing heavily on the minds of festival attendees on Friday morning. As Damon Albarn walks on stage to open the Pyramid Stage alongside the (wonderful) Orchestra of Syrian Musicians’ he’s currently touring with, it therefore falls to him to sum up the mood as he opened the set by beginning, somewhat dejectedly: “So, yeah. Reasons to be cheerful…”, before managing to list just one reason to be cheerful: “It’s not raining!”. The mood therefore isn’t helped when, 15 minutes into the performance, it starts raining.

Okay, so time for an admission: during Wolf Alice’s set, I spend a full 30 seconds - having spotted a girl nearby in the crowd - trying to work out whether she is Ellie Roswell. You know, Ellie from Wolf Alice. Yep, that’s genuinely 30 seconds of trying to work out if the lead singer of the band I was watching play live had come to see the band I was watching play live, play live. These thoughts are honestly passing through my head, before I came to the startling realisation that it was probably unlikely that she could be on stage and simultaneously in the crowd watching herself play. Count out 30 seconds now if you like. It’s really quite a long period of time.

It would be a harsh voice that thinks of the re-emergence of Craig David into our cultural landscape as anything other than good news. This is a man, lest we forget, that wears a wristwatch that doesn’t have any clock hands on it - instead only displaying on its clock face the word ‘now’ - so he can always remember ‘what the most important time is’. Craig’s ‘TS5’ comeback show pushes plenty of pretty obvious buttons as he MCs over a crowd-pleasing party DJ set. All the now established tricks for getting millennials on board are present and correct: 90’s R&B hits, hip hop floor-fillers of the last couple of decades and then, two-thirds of the way through, drop in a quick noughties garage hook that everybody can recall but nobody has heard for at least eight years.

But let us say this for the record: you haven’t experienced true joy at a festival until you’ve experienced Craig rap and sing his old hit ‘Walking Away’ over the beat from ‘Still D.R.E.’. Or, even better than that, ‘Fill Me In’ over the hook from that Skrillex/Diplo/Justin Bieber track ‘Where Are U Now’, during which Craig somehow manages to rhyme the world ‘sixteen’ with the world ‘sixteen’ ten times in a row. Craig David, what a man. It’s an amazing, unrelenting party of an hour.

It says quite a lot that the most charismatic performer we see all weekend is someone that doesn't exactly make a habit out of performing live. But it's true: the woman who said she would be too nervous to ever perform at Glastonbury ends up being the most natural person for the job. Plenty of the more muted acts at the festival could learn that really – if you're looking to stand out from the 20 other shows people see this weekend – this stuff quite matters. Adele pulls off her set by being an open book with her audience: she's detailing in fairly graphic detail what it's like to find yourself headlining Glastonbury, and the crowd as a result get some sense that they're getting to headline it with her.