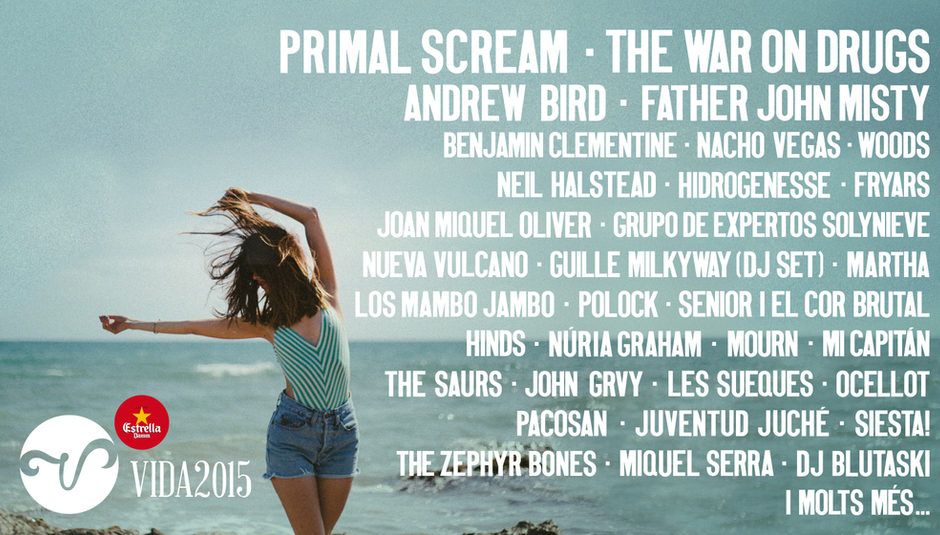 A couple of weeks ago Primavera Sound celebrated its 15th edition here in Barcelona with a typically fantastic, diverse bill, and very shortly Sónar will return to stake its claim as the premier electronic music festival in Europe (its line-up, as ever, is outrageous). The city is beautiful, the weather is hot and fine, and the atmosphere at both is brilliant. But as they become larger and ever-more popular, some enormously appealing (and notably easier on the wallet) alternatives have emerged in their wake; the Bestival or End of the Road equivalents, maybe, of the aforementioned ‘Big Two’.

This year’s Cruïlla brings heavyweights such as Kendrick Lamar, Lauryn Hill and Franz Ferdinand & Sparks to the city, while some 40 kilometres down the coast, the second edition of Vida Festival is shaping up to be something rather special indeed.

Vida will take place from the 2nd to the 5th of July in the coastal city of Vilanova i la Geltrú at a number of venues, ranging from the grounds of a stately mansion to shady wooded areas and beachside bars. The festival may be in its infancy, but following a strong first showing, this year’s bill is rife with highlights. Primal Scream, Super Furry Animals and Andrew Bird are perhaps the most recognisable names, while recent breakthrough acts like The War on Drugs and Father John Misty will also appear. A number of brilliant local groups are in on it too, from Barcelona’s Mourn, Les Sueques, Núria Graham and Nueva Volcano, Madrid’s Hinds (formerly Deers), and renowned singer-songwriter Nacho Vegas. DJ sets come courtesy of our very own End of the Road DJs and Guille Milkyway among others.

There are a whole lot more artists, a whole lot of different options regards accommodation and a whole lot more going on besides. (It’s also worth mentioning Vilanova i la Geltrú is an easy train ride from Barcelona, with a special late service to run during the festival.)

For more information and a lengthy Spotify playlist, head over to Vida’s official website. Ticket bundles start from €65 and are available on Festicket here.

In the meantime, brush up on your Catalan and start getting excited by watching this video:


Meanwhile, back in the city over the following weekend - that’s the 10th to the 12th of July - Cruïlla will take place in the Parc del Fòrum, the same striking concrete jungle overlooking the Mediterranean that Primavera Sound calls home. Aside from the draw of artists like Kendrick, Lauryn Hill and FFS, CocoRosie, Emeli Sandé and Damian Marley will also be performing, on top of a raft of Catalan and Spanish acts, from supergroup Mi Capitán to Miquel Serra. Having attended a few editions of this growing festival, I can attest to a wonderful, friendly vibe, sensibly staggered stage times and uniformly fantastic sound.

Have a look at the festival’s official website for more information; ticket bundles are also available from Festicket, starting at €55.