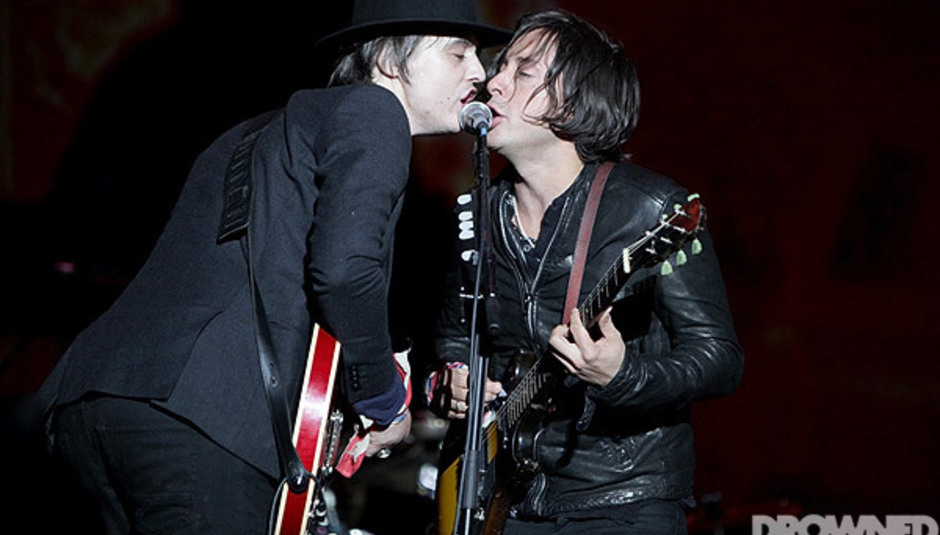 It’s a damp Saturday evening in London, and in front of enough fans to storm the Palace The Libertines prepare to reunite for Barclaycard British Summer Time. Behind us a chair-swing hurls grown-ups into orbit. Teen bladders threaten to burst. A child in a sun-hat watches two crows circle a billboard, snapping at each other’s tails.

Biggles and Bilo, is what the mags used to caw in the special-feature cover issues, way back in the don’t-call-‘em-Noughties when a baggy band tee and straw hat struck kids like me as acceptable daywear. Those days the charts mattered, fan forums swallowed hours and A4 manifestos awaited the Guardian writer fool enough to declare Doherty ‘better off in prison’. Here was an indie soap opera for the ages. Even the band wrote an album about it.

Stagefront a tremendous melee threatens to crush diehards. Halfway into ‘Boys in the Band’ security scramble onstage and broker calm. Riled, mid-crowd renegades hoss fireworks; their red smoke illuminates banners reading: ‘Barclaycard British Summer Time’. Lax dad is how you'd describe Pete's reaction. 'We can't carry on if you don't calm down a bit,' urges Carl with fondness. You have to admire Carl. Seeing him marshal proceedings is like watching your mate’s mum enforce bedtime at a sleepover, lest we roll home all frazzled nerves and sunken eyes. Meanwhile dad spills the ashtray fumbling for The Exorcist on blu-ray.

Ten minutes later ‘Boys in the Band’ resumes and everyone loses their shit. In Pete’s face you see the ruins of a dream. Carl looks at him like, We've got this pal. Drummer Gary is the secret weapon - tight, propellant, ferociously fast. ‘Death on the Stairs’ spins a riotous yarn of clambered balconies and Eritrean maidens. Who needs social realism when Arcadia remains unmapped?

The music rocks primitive but its mythology’s more complex. Like all cross-culture icons - Chuck D, Joe Strummer, Tony Blair - Pete and Carl were uniquely of their time, capitalising on a New Labour hangover by prematurely reviving the principles of Britpop and injecting old-romantic fantasy. But their draw stretched beyond capital-P Politics. On the eve of textspeak and online chatois, the ‘Likely Lads’ fused Artful Dodger jest and arch genteelism to paint an appealing universe in which class conflict (rather than race-, gender- or psychological conflict) possessed the sex appeal that mainstream apathy lacked. It was rock music, basically.

Yet in the surrounds of my working-class tenement adolescence, what a gold mine! What history in the making! What convenient reprieve from biting the bullet and confronting the midcentury travails that persistently harrowed my Black American ancestors. A few miles away Kanye headlines Wireless. We all know the trade-off there - insensitive lyrics, baby-faced rants, freakish antagonism - but at least he self-destructs properly. Right now Pete’s soldiering through some technical difficulties by mocking a backstage official who questioned the Union Jack on his camper van.

Steeped in disillusion, pissed in a field, do I long for Kanye’s vitality, his grandiose sincerity, his demented flair? To my shame, no.

‘Time for Heroes’ pumps out the serotonin and suddenly we’re invincible. Seeing ‘Don’t Look Back into the Sun’ live feels better than my first kiss. Okay, I don’t remember my first kiss. But hey, ‘Radio America’ lands like my first love letter. And don’t get me started on ‘Tell the King’. I mean, for years Up the Bracket consumed around 50 per cent of my total capacity for teenage love and devotion, and I’m not about to forget it. I’m not about to stand in reverie without plundering some dark reserve and bellowing every slurred aside verbatim as my new best mate besieges my shoulder-blades for a smoke.

Still, there's an unfortunate combination of fighty fans, open-air sound and slightly muffled vocals - annunciation never being the band’s strong point - that threatens to swizz the night of some unpindownable majesty. Oblivious, the show ends on a jubilant note. Pete and Carl wrestle, a beast of many elbows. Feedback recedes leaving the empty stage backlit by corporate enthusiasm for an Ally Pally rerun. Chilli from Palma Violets mills about the press area. A grown-up on Facebook dubs the concert life-changing. A child in a sun-hat watches two crows circle a billboard, snapping at each other’s tails.

Photo by Mike Burnell, from Reading 2010

James Nicholls from Fire Records on the Independent Label Market

Exclusive: Blessa 'Unfurl' some sweet moves in their new video