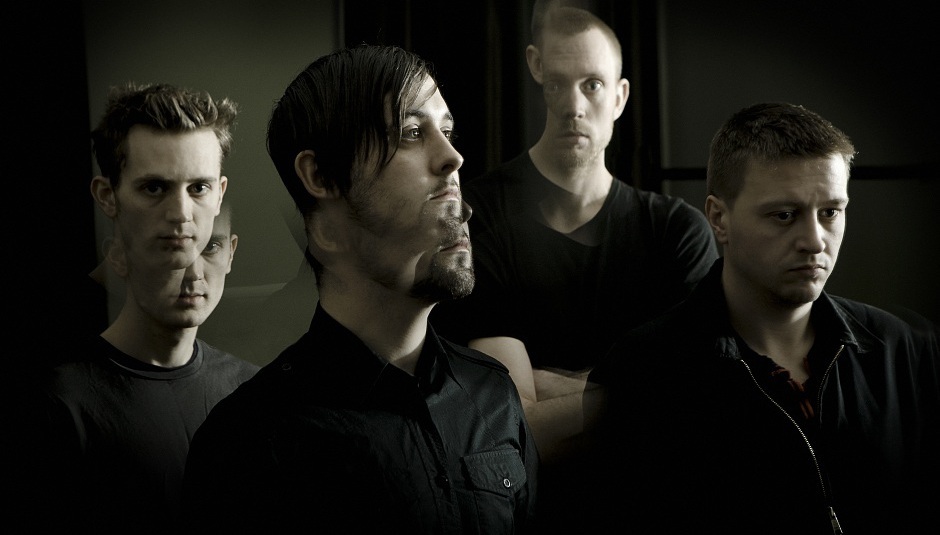 To close our 65daysofstatic week, we have a free download of 'Prisms' for you, which was this month's DiS pick for MAP, the monthly compilation compiled by picks from bloggers from around the world!

From movie soundtracks to Japanese arena shows to a US tour with The Cure, this electronic outfit from Sheffield have had one hell of a career since forming back in 2001. The cult heroes' fifth album Wild Light is out this week, and finds the band continuing on their mission to retro-fit the future. Mixing together a myriad of glitches and orchestral sounds they've created yet more of their signature brew of complex but hearty digital delights.

Click the play button icon to listen to individual songs, right-click on the song title to download an mp3, or grab a zip file of the full 29-track compilation through Ge.tt here.

ARGENTINA: Zonaindie Travesti - Beduino Fernando Floxon and Alejandro Torres are the cosmic rockers behind Travesti, a band whose music is often associated with transgression and misunderstanding, with songs that are dense, powerful and provocative. Their lyrics, always clever, rough, usually offer a certain social criticism. Beduino is our favorite from Suicidio Latino, their fourth studio album.

AUSTRALIA: Who The Bloody Hell Are They? Manor - Architecture The general assumption that tormented bed friends make better musicians most of the time is true - right? In respectable 'dream-pop duo' tradition, we hope these two are. Architecture is timeless pop right from the first off-beat. The track is set with slingback hooks, dreamy vocals and a fledging groove that sounds too much like Chairlift's Caroline Polachek doing a cover of Men At Work's Land Down Under for anyone to ignore.

AUSTRIA: Walzerkönig Beach Girls And The Monster - I Go Surfing This band draws their inspiration from American surf rock of the 1960s. Accordingly, their rendition of The Beach Boys' Kokomo suits them so very well, not only because of the obvious band name correlation, but also because it blends perfectly into their own sounds. The aptly titled I Go Surfing is the first song of their four-track 7" EP of the same name that was released earlier this year.

BRAZIL: Meio Desligado A Fase Rosa - Casa Música Popular Brasileira meets alternative rock at its best. This four-piece band is one to keep our eyes and ears on.

CHILE: Super 45 Otoño - Scheider After eight years of silence, Otoño are back with their psychedelic guitar-rock. Their atmospheric, drowsy sound grows every second until it explodes in a whirlwind of white noise, a perfect landscape for their gloomy, self-reflective lyrics. Scheider is taken from the quartet's Páramos EP, released via LeRockPsicophonique.

CHINA: Wooozy Worldwide Collaboration Company - Crying Launer Remix (feat Chairman Ba & MC Stone) Nobody knows who the people behind World Collaboration Company are, but anyone in China who listens to them will find something familiar. WCC mash up cross-talk recordings, TV series samples, Chinese propaganda songs as well as rock and hip hop, and put an overwhelmingly sarcastic touch to it. While some criticize WCC's sound collage approach as being too lighthearted, others can argue WCC are simply one of China's best and most clever sample players. Love them or hate them, one thing you can't deny is WCC reflect the true pop landscape of modern China.

COLOMBIA: El Parlante Amarillo MULA - A. Grisales With much pride we present MULA, a kind of supergroup formed by Santiago Botero and Mange Valencia. Armed with saxophones, bass, drums and guitars, they effortlessly incorporate anything from punk to jazz to champeta - they don't recognize genres, but sounds. It's a very particular and special view that takes form in the track A. Grisales, inspired by Colombian TV's first diva, Amparo Grisales.

DENMARK: All Scandinavian SPEkTR - The Infirm Three years on from their second album Personetics, SPEkTR release The Door Is Paint On A Rock EP on September 23. Frontman Manoj Ramdas (also The Raveonettes, The Good The Bad) calls it Soundtrack'n'Roll and there's no good reason to argue with that description. Here's the awesome EP's first single, The Infirm, which also comes with this video.

ECUADOR: Plan Arteria Rima Roja En Venus - Bendición De Ser Mujer The impressive female rap of Rima Roja En Venus shows the strength of the fight against discrimination and violence. These two women use music and poetry to express social criticism with a positive message. Bendición De Ser Mujer is taken from their 2012 album Libre Albedrio. You can see the video here.

ESTONIA: Rada7.ee Thou Shell Of Death - The Night-Wind This strongly ambient-influenced black metal band is majestically atmospheric, with mesmerizing live shows. Thou Shell Of Death has played all over the Europe, sharing stages with well-known and underground acts (Strid, Negura Bunget, Vesania, Altar Of Plagues, etc). The Night-Wind is from their new album Sepulchral Silence, released this month by Austrian label Talheim Records.

FINLAND: Glue Maglevs - Van Rijn Indie band Maglevs play organic dream pop with strong dynamics that might draw comparisons with Okkervil River. They have just released a debut EP that you can hear and download on SoundCloud.

INDIA: NH7 Blent - Cafe Coffee Tale_Bummer Blent is the music project of Bangalore-based Aniket, a game designer by profession and an experimental electronic music producer seemingly by way of hobby. Blent has just released his first formal set of tracks that became the Dusk EP, available for free download from Bandcamp. Blent's music lends itself to the experimental genre but can be best described as The Postal Service meets Four Tet, coming together with the staccato pace of the garden city of Bangalore.

INDONESIA: Deathrockstar Bikinies - Dance Floor Mafia All girls, all fun, all wild on stage. Influenced by the 90s alternative scene with distortion and yelling, Bikinies offer one of the rawest sounds in Jakarta.

ITALY: Polaroid His Clancyness - Zenith Diamond His Clancyness, once a solo project for A Classic Education's Jonathan Clancy, now a full band, deliver an intense and psychedelic, sometimes dreamy, sometimes fuzzy sound inspired by the likes of Deerhunter, Kurt Vile and Lower Dens. Amazing new single Zenith Diamond is taken from Vicious, one of the most important Italian rock albums of the year, which gets a UK/US release on October 7/8 through FatCat Records.

JAPAN: Make Believe Melodies Cosmosman - Unique Fun Fiction It has gotten to the point in the Kansai region of Japan - made up of cities such as Osaka, Kyoto, Nara and Kobe - where new electronic artists pop up nearly daily. It takes a lot to jump out from that crowded scene, but Kobe outfit Cosmosman do just that with Unique Fun Fiction. It is a playful number with an Enchanted Tiki Room vibe, but made even better by the unsettling nature of the vocals. It comes from the stellar Ananga Ranga album, available via the link above.

MALTA: Stagedive Malta Alex Alden - Just Like You Alex Alden takes every opportunity to play live and share her lyrics and poetry through song. Having performed extensively in various venues around the islands, she is now relocating to Holland for the next few years. Alden's music is heavily influenced by blues, pop and classic rock, and draws inspiration from jazz whilst exploring the trials and tribulations of young adulthood, often using the themes of nature, mythology and childhood to communicate her message. Earlier this year she released her debut EP The Curious Child.

PERU: SoTB Iván Fajardo - Me Voy Dejando Iván Fajardo is a musical icon in Peru, his musical independence reflected in bands such as Indigo and Era. It is displayed once again in his first solo album, Vímana, the highest point of his career. This new beginning has 10 songs full of mythology, nostalgia and melancholy. In Hindu mythology Vímana is a flying machine and the album promises to be a space trip.

POLAND: ?ukasz Ku?mierz Weblog Furia Futrzaków - Noc Wystarczy? Ma Na D?u?ej Four years after releasing their self-titled debut LP, Warsaw electro-pop duo Furia Futrzaków are back. They have moments when they sound like Junior Boys, as you can hear in Noc Wystarczy? Ma Na D?u?ej, a single from Kalejdoskop EP, but things are a little bit different here. Soulful vocals, lyrics about mainly happy (but difficult) love and a warm coating are Kinga Mi?kiewicz and Andrzej Pieszak's own contribution.

PORTUGAL: Posso Ouvir Um Disco? Nome Comum - Cuco Nome Comum ("Common Name") are a quartet led by two siblings, Bernardo and Madalena Palmeirim. Both are writers, players and singers in the band. Cuco, which is also the name of their debut album released this month, is their first single. It has a video directed by Gonçalo Soares.

PUERTO RICO: Puerto Rico Indie Un.Real - Piloto Gardy Pérez began experimenting with an analog tape recorder back in 1995, a direct response to the cancellation of MTV's seminal Alternative Nation. Trying to channel all the energy of the shoegaze movement he had been exposed to through television, Pérez founded Un.Real, becoming one of the great emerging bands from Puerto Rico's west coast underground scene. An extended hiatus and various line-up changes later, Un.Real is back and revitalized in their new EP, Épico. The song Piloto showcases the dreamy soundscapes Un.Real is so adept at while adding guest vocals by Xavier Rodríguez of local band Indigo.

ROMANIA: Babylon Noise Poetrip - A?a Ceva Described as a mixture of krautrock and Japanese psychedelia, Poetrip is a band who became popular by promoting their music as a dadaist manifesto. They make use of pop clichés to convey attention to absurd and often psychedelic musical contexts.

SOUTH KOREA: Korean Indie Square The Circle - Bitchquito Rock band Square The Circle has a fondness for uptempo tunes that give them a chance to show their colors. They've been around for a couple of years and released their 1003 EP in August. Bitchquito is a song with great energy, telling the story of a girl that sucks blood like a mosquito.

UNITED STATES: We Listen For You Wharfer - Architect Brooklyn's Wharfer is the musical project of Kyle Wall. Wall complements his gentle and emotional backing music with commanding vocals that cut through the speakers with one intention: to make the listener feel every word. With every subtle artistic choice, Wall is simply defining himself as a songwriter with the intelligence to back up his raw talent.

VENEZUELA: Música y Más Da Vianda - Nómada In late 2012, and after nearly a year as a band, Da Vianda recorded their first EP, which contains six songs written by these four young boys from Puerto La Cruz. "Our goal is to have fun and create honest music," they say. Their self-titled EP can be downloaded from Bandcamp.