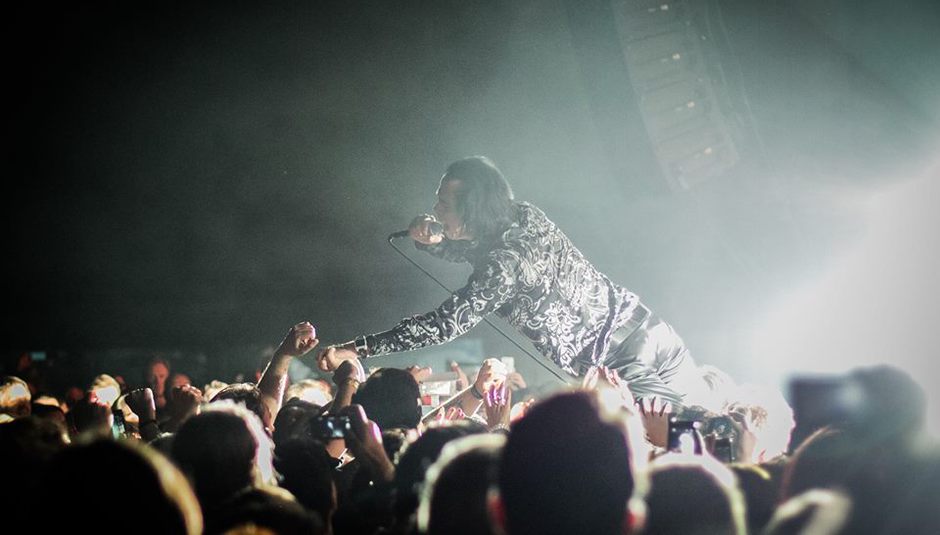 Break a leg: the inaugural ATP Iceland gets off to a flier

The former NATO base Ásbrú, close to the airport town of Keflavík, is an eerie place. Ranks of barracks stand clean and empty in a wide, open landscape. A radar dome looms on the flat horizon alongside perimeter fences, disused airstrips, empty warehouses, and a decommissioned forces hospital that has been completely gutted except for a solitary x-ray machine. Walking around the base feels a bit like being a film character looking for a Jim Jarmusch movie - waiting for the white-haired don of indie film to swoop in with a Super-8 camera, a cinematographer, and a storyline.

And swoop in he does. For, in a new chapter of Ásbrú's history, the base has been cast as the location for the first ever ATP Iceland. Jarmusch will programme the films for the utilitarian on-site cinema along with Tilda Swinton, as well as performing in his band SQURL. Nick Cave will headline, with all his Bad Seeds in tow. Thurston Moore's Chelsea Light Moving join indie-rock veterans Deerhoof, The Fall and The Notwist on the bill alongside some relative newcomers to the pantheon, Thee Oh Sees. And that's not to mention the homegrown lineup, which reads like a who's who of the Icelandic avant-garde. Safe to say, the base won't be this quiet for much longer.

ATP seems to have a rough time of late, with the forthcoming 'End of an Era' UK weekends announced as the last of their type. They organisers didn't given specific reasons for their decision in their statement, but it's no secret that the vastly increased number of small festivals that crowd the summer season have been suffering, for a range of reasons, in recent times.

Of course, out in Iceland, the conditions are different - for example, the majority of the audience come from the adjacent town of Keflavík or nearby Reykjavík (45 mins by car), and so the holiday-camp setup isn't quite the same, with most people opting to head back home instead of partying into the early hours. The festival also breaks with ATP tradition by introducing a couple of media partners and sponsors to the fold, but they're so low-key that it barely seems worth mentioning. The important elements are there - in terms of the bill, the sound quality, the lighting, the staging and the atmosphere in the room, ATP Iceland feels familiar indeed.

If there's one Icelandic band who seem built for the ATP ethos, it's Keflavík local-boys Æla, who open proceedings with a characteristically full-on, pulverising set of tense, explosive punk-rock-noir. Frontman Halli Valli towers over the crowd on a wobbly chair before invading the audience, screaming as he goes; his band, dressed as something resembling macabre Christmas gnomes in pointy hats, look on plaintively. Halli Valli starts the set in a tuxedo, and somehow ends it dressed as Snow White. It's a dark, surreal, compelling beginning.

In the main hangar, Apparat Organ Quartet are dishing up their mind-bending kraut-prog-classical-metal, or "machine rock 'n' roll" as they refer to it. They're a band that consistently transcend their many influences, creating a sound that sparks an insane level of fandom in certain people. Tilda Swinton, it seems, is one of the chosen few; after losing her shit in the crowd, she'll later track down the players for kisses, congratulations and photographs of the band's triangular hand symbol, making the local news in the process.

The day is peppered with high points. Alt-rock trio Kimono seem sharper than ever, unveiling their first new song for quite a while before a rapt crowd; Múm create such a strong atmosphere with their fragile dream-pop that it feels like the sound is hugging you; Mark E. Smith does his usual deranged schtick, somehow turning his objectionable belligerence into a hypnotic spectacle as he staggers around the stage sabotaging the amps and intimidating his band.

The second day eases in slowly with a gentle programme at the cinema that includes Puzzle Muteson, Valgeir Sigurðsson and amiina, who perform a delicate set gleaned from their recent Lighthouse Project EP.

The bill at the hangar space is dominated by Nick Cave & The Bad Seeds, and the anticipation is palpable. Cave is on the record as saying this is 'his favourite festival, in his favourite country', and the deafening roar as he takes the stage seems to fire him up immediately. He stalks and prowls, the mic lead whipping around his skinny suited legs, proclaiming couplets in that deep preacher's voice. As 'Jubilee Street', an instant classic from the new LP, hits its climax, he descends a narrow purpose-built walkway, leaning over the audience's heads, twitching, strutting and gripping the raised hands of the front row as if bestowing blessings, or curses.

And then it happens. In a startling moment of real-life theatre, Cave strides back up the ramp but loses his footing, taking a sudden awkward tumble out of view to an audible gasp from the throng. Security dive into the pit to retrieve him; the band play on, with only Warren Ellis seeming to have noticed. For a few seconds, the show seems in doubt - the fall must have been six feet onto solid concrete. But a minute later, Cave miraculously strides out from stage-left to cacophonous screams, hammering away at his piano before dancing across the front of the stage defiantly, howling the cathartic closing refrain: "I'm flying / I'm transforming / look at me now". Rather than breaking him, the slip has amped up the voltage of his performance to a feverish level.

Fans get their favourites: 'The Weeping Song', 'God Is In The House', 'The Mercy Seat', 'Stagger Lee' and 'Red Right Hand' seeming to resonate particularly, and contributing to a feeling when the set is done that something momentous has taken place. Word goes around later that Cave went straight from the stage to the hospital after an hour of performing through pain. He was discharged with nothing broken, given some painkillers, and somehow headed back to the UK to play Glastonbury the following day.

Afterwards, it feels a little like The Bad Seeds have blown a hole in the side of the lineup. After valiant performances from Hjaltalin and Deerhoof, it takes Æla playing a second set under Keflavík's pink midnight sky to whip up the crowd once more. And so, ATP Iceland goes off like a rocket, having seen a performance that will talked about in these parts for years to come.