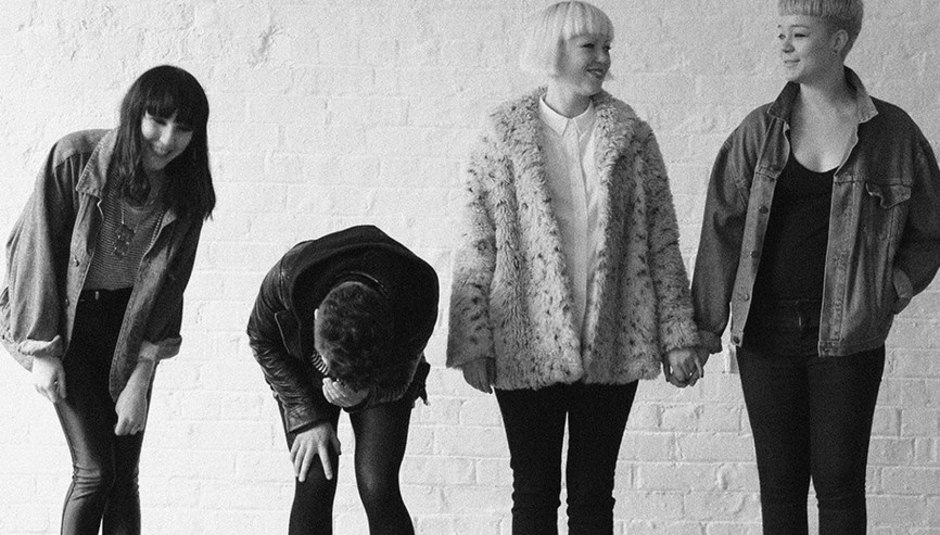 Drowned In Sound have been following the progress of Manchester four-piece Pins for a while now. The first time we saw them live; nearly twelve months ago to the day; we described them as "Sassy yet distinctly unmoved by what surrounds them, they could well be the saviours of guitar pop other commentators have spent the past eighteen months rambling on about."

Since then, they've signed with Bella Union and released the awesome LuvU4Lyf EP in October of last year which received a healthy 7/10 on these very pages.

After a busy few months playing festivals and touring around Europe, they've also been writing and recording songs for their as-yet untitled debut album, due to be released later this year. The first fruits of their labours will be available as a limited edition double seven-inch on Monday 22nd July. 'Stay True' / 'Get With Me' can be ordered in advance here.

Here is 'Stay True' from the single.

In the meantime, they've also undergone a line-up change that's seen them bring in a new drummer. The band had this to say on the matter:-

"We were sad to see Lara go, but we wanted her to do what made her happy and not hold her back from that. Having Lara with us from the start was integral to us finding our sound and our confidence as musicians, and we’ll love her forever. When we met Sophie we all clicked. Sophie is a musician by trade and is really focused on being in the band and making it work. We’re all really dedicated and put a lot of time in – did we mention we are a Girl Gang? Sophie has lots of touring and recording experience, which has been great for us."

They're also launching a label - Haus Of Pins - and will be releasing limited edition cassettes by Abjects, September Girls and Female Band over the coming months.

Finally, they're also scheduled to play several dates throughout the summer, calling in at the following...

For more information on Pins visit their official website.

New Music from Around the World: June 2013's MAP Compilation is here