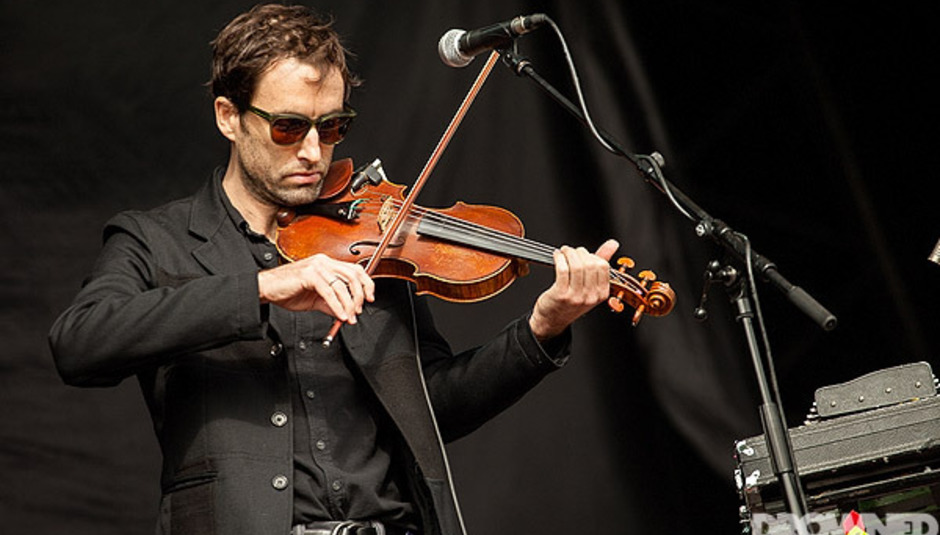 Earlier this year Andrew Bird released the smart, beautiful and endlessly re-playable Break It Yourself. On Monday he drops its companion piece Hands of Glory, a collection of covers and acoustic re-interpretations recorded in a church in Louisville and at his barn in Illinois.

It is yet another fine release from the Chicago-based multi-instrumentalist, who plays the Roundhouse in London this Thursday, November the 8th. As a preview of the show we’ve gathered together some videos from the last few years, starting with the brand-new, sepia-drenched short for ‘Three White Horses’, the first song on Hands of Glory:

A few nights ago Bird was joined onstage by Tift Merrit and Alan Hampton for a run through Townes Van Zandt’s classic ‘If I Needed You’ on The Late Show with David Letterman. (The song also features on Hands of Glory.) Owing to Superstorm Sandy there is no studio audience to speak of, while Letterman himself is on uncharacteristically subdued form. This only serves to underline and amplify the song’s central message – the warmth and solace we can find in each other, if we only look for it – making for an unshowy yet startling performance.

Here is a live video of Bird playing his version of the Handsome Family’s ‘The Giant of Illinois’ at a festival in the Hague in 2007. The audio has a slight hiss to it and the video is hardly the crispest, yet this is a lovely performance of a lovely, lovely song, one which later appeared on the indie-folk all-star charity team-up Dark Was the Night in 2009.

At Bonnaroo 2006 in Manchester, Tennessee, Bird played a stupendous rendition of ‘A Nervous Tic Motion of the Head to the Left’ to an adoring audience; a skittering, feverish highlight from 2005’s Andrew Bird & the Mysterious Production of Eggs, rendered in loud, emphatic strokes.

2007 saw the release of the brilliant Armchair Apocrypha. Here is a black and white shoot of its clattering opening song ‘Fiery Crash’, recorded during a showcase for La Maroquinerie in Paris that same year.

And finally, no video for this one, though it isn’t really necessary: ‘Hole in the Ocean Floor’, from May’s Break It Yourself, is an almost impossibly elegant eight and a half minutes of music; a rich, sonorous statement of intent from an artist whose melodic generosity and prodigious talent is something to treasure.

Visit Andrew Bird’s official YouTube Channel to browse a bunch of great stuff here, and buy tickets for the Roundhouse show (Nov 8th, with Micah P. Hinson as support) here. Look out for an interview on DiS in the near future.