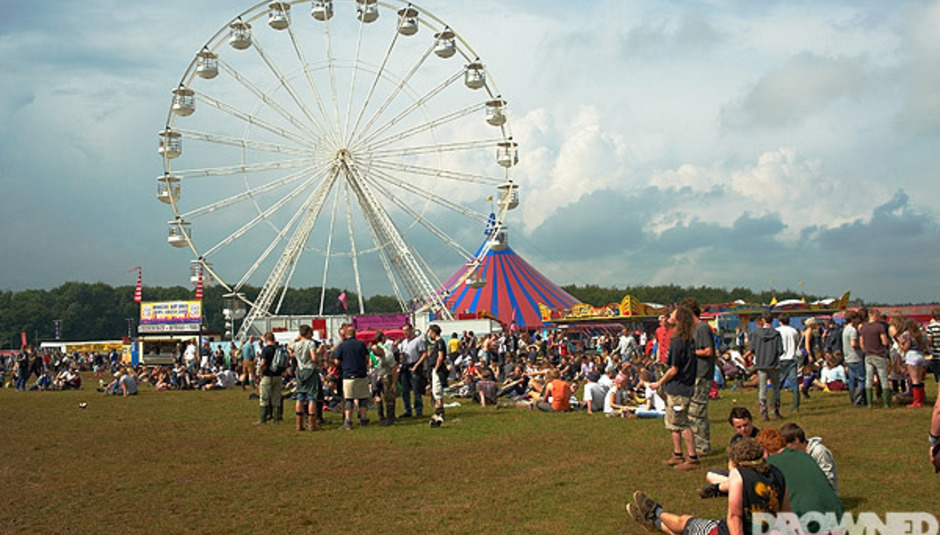 Livers barely in tact and sleep a forgotten pastime, Drowned In Sound's Daniel O'Dell and Dom Gourlay bring you their hits and misses from the final day at this year's Leeds Festival.

It may have taken them seven years and three albums to attain Main Stage status but here, today, Blood Red Shoes seem as though they've finally found their natural habitat. Undaunted from start to finish, even when Laura Mary Carter's guitar breaks down towards the end of 'Heartsink', their midday slot on the big stage is something of a triumph. While In Time To Voices may not have been as well received as either of its predecessors, the songs they choose to play from it sit well with their more familiar older material. 'I Wish I Was Someone Better' and 'Light It Up' encourage a communal round of fist-pumping and pogo-dancing respectively, Steven Ansell dedicating the former to Leeds based buddies Pulled Apart By Horses while imploring all and sundry to go and watch At The Drive-In later this evening.

The Sunday line-up of the main stage screams Radio 1 A-list, and Mystery Jets set had the band flitting between the catchiest of their material, unfortunately leaving no room for anything off Making Dens. Visually the band looked the part, decked out in the stars and stripes and cowboy attire infront of an Arizona backdrop and they gleefully worked through tunes including the spangly-synth pop of 'Two Doors Down', and the sickly-sweet 'Greatest Hits'. Whilst being a beautiful song, their ballad 'Flakes' followed by the unfamiliar 'Lost In Austin' are surprising choices to end the set on especially having played having sparked sing-a-longs from those at the front for the likes of 'Young Love'. It's quite sad that after four albums they seem to have found themselves unable to climb any higher up the bill and are stuck receiving little attention as the soundtrack to the crowds' drinking games. (You forgot to mention the man with The Enemy tattoo! - DG) After lasting a few songs into The Shins downpour I fled up to the Festival Republic tent for Nottingham troubadour Jake Bugg, where I wasn't the only one to have had that idea, as every covered inch has people cramming themselves inside. Opening with 'Kentucky' the big country bassline and Jake's roughly twanged acoustic sounded like 'Folsom Prison Blues' travelling Midland Mainline. Inbetween song chat was kept to an absolute minimum, but there was no sign of nerves whilst the teenager played to what must have been one of the biggest crowds in his short but fledging career. It will serve as a valuable experience as he is due to open for Noel Gallagher and Snow Patrol in the US later this year. After a while his faux-americana voice began to grate and I doubt I could stomach an album's worth. Although he had saved three of his singles for the end and the crowd weren't going anywhere in these conditions, so we received zealous renditions 'Trouble Town', 'Taste It' and 'Lightening Bolt'. All of which derivatively infuse sounds from the greats of country, folk, and rock - but when Kasabian are headlining the Main Stage the same evening it's a factor unlikely to hinder his progress.

Having slayed Summer Sundae festival goers last weekend, the Nottingham based outfit cause a similar level of commotionw here. Playing to a jampacked crowd on the Festival Republic Stage, they're joined by a five-strong choir that augments their happy-go-lucky yet actually quite hummable repertoire. 'River Jordan' and 'Hands Down' whip up an early frenzy while 'Glockenspiel Song' and 'Teenage Daughter' create a fitting climax that makes long-awaited debut album All Our Favourite Stories a mouth-watering prospect. Main Stage next year? Stranger things have happened...

If points were awarded for t-shirt sales alone, The Vaccines would have had Leeds Festival sewn up by close of play Friday. The Vaccines Come Of Age is the title of their forthcoming album and as with its predecessor What Did You Expect From The Vaccines?, it pretty much does what it says on the tin. If last year's NME Stage performance announced their arrival on the circuit, this year's elevation to the Main Stage marks their coming of age and some. Sure, they ply a tried and tested formula but when it's employed as well as this does it really matter? Of course not. New songs like 'Tiger Blood' and 'Teenage Icon' effortlessly glide into the more familiar likes of 'Wetsuit' and 'All In White'. What they lack in originality is made up for in abundance by the sheer passion and enthusiasm in which they deliver their wares. By the time 'Norgaard' closes the set, it feels like the whole of Leeds has descended on the Main Stage, desperate for a piece of the action, and when all's said and done, one really can't ask for any more than that.

Despite originating from down the M1 in Wakefield, The Cribs have a habit of jubilantly treating their Leeds Festival appearances like homecomings, and with this being their sixth appearance they are now veritable veterans. It could be argued that they are Britain's biggest cult band and an hour slot isn't enough for them. It's criminal that Friday's and Saturday's equivalents were indistinguishable lightweights Two Door Cinema Club and Foster The People. The band therefore waste no time, blitzing through 'Come On, Be A No-One' while raw versions of 'Hey Scenesters!' and 'Mirror Kissers' ignite the crowd. New material punctuates the set with vital slower moments such as 'Anna' that has Gary sounding like J Mascis incarnate. Whilst the Jarmans terrorise every inch of the stage, additional guitarist David Jones shies away from the limelight, but his contribution is clearly evident as 'Another Number' is fleshed out from being a skinny indie-pop tune to something much grungier. When I'd seen The Cribs tour earlier in the year it had felt as if they'd been disappointingly going through the motions with no need to prove themselves to the already converted - yet in the packed NME stage there were no such problems with Ryan Jarman resembling a rock star from his own unique mould. The set ends on a raucous 'City of Bugs' which despite originating from the forgettable Johnny Marr era sees them hark back to the early days as they forcibly detune their instruments into walls of feedback. It feels like the band everyone fell in love with are back.

Having headlined main stages and arenas at various junctures of their eighteen-year career, a forty-five minute slot on a Sunday night should be a piece of cake. And so it is for Feeder, a band who could probably cause a rabble rousing riot in their sleep. The Festival Republic stage not surprisingly packed to the rafters, Grant Nicholas and Taka Hirose bring out the big guns from start to finish. 'Feeling A Moment', 'Insomnia', 'Renegades', 'Just The Way I'm Feeling', 'Buck Rogers'... They're all here. As with Blood Red Shoes earlier in the day, Nicholas urges everyone to go and watch At The Drive-In over yonder; no mean feat considering the end of his band's set overlaps with the start of theirs. Of course it would be rude not to stat put until the bitter end, and a glorious closing salvo of 'High', 'Generation Freakshow' and 'Just A Day' justifies that decision. Feeder may never be considered cool, but in terms of live performance and a consistently high standard of recorded output, there's very few capable of matching them over a similar period of time.

Hotfooting it across from the Festival Republic stage to the NME/Radio 1 stage in double quick time, DiS is taken aback to find the tent only half full as 'Pattern Against User' greets them like a long lost son. Still, it's their loss as for one relentlessly intense hour, At The Drive-In remind all those present why those that cared have literally been counting the days down for this moment to arrive since announcing their reunion earlier this year. As expected, the set draws heavily from third and final album Relationship Of Command. 'Enfilade' and 'Metronome Arthritis' pulsate with the same spasmodic energy as when the last time At The Drive-In played them here in 2000. The material that is played from its predecessor In/Casino/Out - a chaotic 'Chanbara' that segues into 'Lopsided' before a sprawling 'Napoleon Solo' induces grown men to tears make everyone forget the real reason these five individuals have chosen to share a stage again. In between struggling to stand still and at times breathe, Cedric Bixler makes dedications to Mastodon and Taco Bell respectively. By the time 'One Armed Scissor' closes the set almost twelve years to the day since their last appearance at Leeds Festival, any lingering doubts are removed as to the validity of At The Drive-In's return to the live stage. Welcome back.