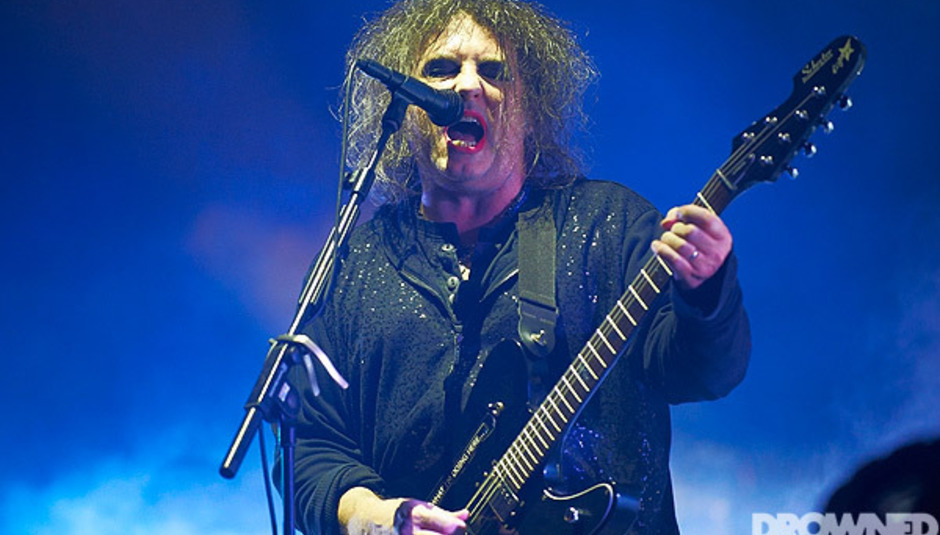 Having survived day one of this year's Leeds Festival, Drowned In Sound's men on the frontline Daniel O'Dell and Dom Gourlay are back with a round-up of the good and not so good happenings from the second day.

As the music industry searches for that guitar band to rival the big guns of yesteryear, the hype machine has found itself in overdrive this summer. One of those heavily tipped happen to be London based four-piece Palma Violets, and while it isn't their fault unfathomably hefty expectations have been placed on such young shoulders, it would be fair to say it's simply far too soon in their development to make any kind of judgment call as to whether these are the "saviours of guitar music" avid campaigners have been crying out for. That isn't to say they're bad. Far from it in fact. There's certainly enough potential here for them to take that leap forwards in the future. But that's exactly all it is for now; potential. Musically their stock appears to fall somewhere between the three-chord bluster of The Vaccines and experimental psych-rock of The Coral, which could be a good or bad thing depending where you sit on either. They have a song which may be called 'Over And Under' where the band ask for (and duly receive) audience participation of a hand-wiggling variety. Set closer 'Fourteen' meanwhile reminds me of Manfred Mann's 'The Mighty Quinn' if reinterpreted by Echo & The Bunnymen. Give them time to grow at their own pace and they may just get there. Force it and implosion beckons sooner rather than later. Which is it to be?

Los Angeles quartet Fidlar are something of a little known quantity on these shores. However, if today's performance on the Festival Republic stage is anything to go by, such anonymity won't remain for long. Despite being given the early afternoon lunchtime slot when most people are still recovering from the night before, it takes approximately two songs for the tent to swell up en masse. Call it frat-punk, new grunge or simply ocean washed garage, they're a welcome introduction to Saturday's proceedings. Mixing the 1-2-3-4 polemics of The Ramones or Dead Boys with the carefree gang mentality of Black Lips, each and every song is introduced as being about either drinking cheap beer or ingesting one kind of chemical or another. One of them answers to the name of Elvis, which would be kind of fitting if their retro schtick didn't sound so now. They close on a song about LSD (naturally) that sounds like Mark Arm's side-project The Monkeywrench. Ones to watch for sure.

There's been a lot said about Savages, and it would seem there are some very differing opinions out there. Until today I'd somehow managed to avoid ever hearing a single note of the London four-piece's music though. As when things get massively hyped up it can really deter me investigating; I was the same with Mad Men which was a stupid move on my part. So I headed to a half full Festival Republic tent with an open mind just in time for the beginning of their set. The first thing that was evident, was that they have an incredibly formidable, confident frontwoman. When she's not snarling into the microphone she's pulling shapes straight out of the Ian Curtis school of possessed dancing. Perhaps no co-incidence, as at times their music recalls Joy Divison with it's ethereal guitars and brooding bass lines. However tracks like 'Husband' demonstrated that they're capable of evoking more than just tension and drama, as they kicked up a furious post-punk racket that has more in common with The Slits.

Boringly I'm going to sit on the fence and say they might not be worthy of so much hype, but Savages pose a more interesting proposition than a lot of the Leeds Festival line-up. They're far from reinventing the wheel, but the tent was considerably fuller by the end of their thirty minutes, and they could be a band to keep at least one eye out for.

Decked out in velvet tuxedos and top hats The Hives took to the NME stage looking like circus ringleaders in a packed big top – it was a very impressive turnout considering they were going head-to-head with youth favourites Crystal Castles. The band look slightly more rotund since their last Leeds Festival appearance way back in 2004, but didn't seem to be lacking any of their energy or flamboyance as Pelle Almqvist threw himself (and the microphone) across the tent. The bands biggest singles such as 'Main Offender' and 'Hate To Say I Told You So' have become indie-clubnight staples over the last decade and were well received amongst the obligatory, less than immediate newer material. It was an unexpectedly fun set that didn't take itself seriously. If The Hives were a biscuit they'd be a digestive - it wouldn't be your first pick but you'd still enjoy it.

While checking through the running order this morning compiling today's wishlist of bands I'd like to see, We Are Augustines were a long way from any pre-planned agenda. Which is a crying shame really as last year's Rise Ye Sunken Ships is one of those hidden gems that people will look back on in five years time as something of a lost classic. En route to catch The Hives pantomime routine over yonder, the bellowing strains of 'Chapel Song' emanating from the Festival Republic stage persuades me to take a short, and thoroughly welcome diversion as well as offering a timely reminder why this Brooklyn outfit are so highly revered, particularly by fellow musicians. As an exercise in heartfelt, passionate angst-ridden rock made for stadiums they're one of the finest exponents doing the rounds today. At times it does all feel a little samey, but then why change a winning formula for the hell of it?

Strangely sandwiched between You Me at Six and Paramore, Bombay Bicycle Club found themselves with an early evening slot on the main stage. Opening with 'How Can You Swallow So Much Sleep', they are accompanied by Lucy Rose on backing vocals who had conveniently played a solo set in the Festival Republic tent just an hour beforehand. BBC's breezy, indie-pop would have been the perfect accompaniment to a clear summer's evening but we were to have no such luck as clouds gathered overhead. The folky 'Ivy & Gold' from their acoustic album Flaws was given a heavy electric reworking that conveyed well on the big stage. The band are prolific at releasing material and in the middle of the set took the opportunity to preview a new song supposedly titled 'You Carry Me', it's not much of a change in sound – another melodic catchy number that could easily be a single contender. Ending on an angsty 'What If' it was a decent set, although I'm not sure the band ever envisioned their material being used to soundtrack dozens of girls flashing their breasts under the encouragement of the perviest camera operator in West Yorkshire.

With her bright orange hair, Paramore's Hayley Williams was easily recognisable as she darted on to the stage to deafening cheers from the crowd. This weekend marked their first UK appearances since brothers Josh and Zac Farro left the band as a result of unrepairable dissent and fracture. They've since been replaced by touring musicians, and the new look band kicked things off with big hitters 'Brick By Boring Brick' and by 'That's What You Get'. Midway through we are treated to one new song, 'Renegades', which is perhaps their heaviest material yet, and lyrically sees Hayley reverting back to more optimistic, empowering lyrics after taking a sharp turn towards the dark on 'Brand New Eyes'. Hayley also alludes to what we can expect from the next album though before introducing the penultimate song 'Ignorance', telling us the spite and anger it contains will not be there next time. There seems to be an elitist snobbery and stigma attached to only being able to like Paramore if you're a teenage girl, but as they ended on 'Misery Business' I was thoroughly enjoying a band that are much more interesting songwriters than many of their American contemporaries that share the stage this weekend.

Many eyebrows were raised when The Cure announced Reading & Leeds festivals as being their only UK shows this year. Traditionally seen as a gathering of teenagers celebrating their A Level and GCSE results respectively, quite what they'd make of a now fifty-three years old Robert Smith and his black clad accomplices only they can answer. As expected, a steady stream of one-day ticketholders clearly in attendance for one band and one band only fill out the front area of the stage. Two-and-three-quarter hours and thirty-three songs later, any doubts as to whether The Cure would conquer Leeds are quelled.

As expected, tonight's set was heavy on material from Wish - celebrating its twentieth anniversary this year - and while it could be argued that the likes of 'Doing The Unstuck' or 'From The Edge Of The Deep Green Sea' aren't exactly crowd pleasers for the neutrals in the crowd, they're just a couple of shining examples why The Cure are still a relevant going concern, even in their thirty-sixth year of existence. Members of the Hollyoaks cast snort poppers and dance like loons when they play "the hits", older fans reminisce and sing along to every word religiously when Smith drops in a four-song midset whammy of 'Play For Today', 'A Forest', 'Bananafishbones' and 'Primary'. Returning for a seven-song encore; at the end of which Smith apologises for time constraints curtailing a full set; even the unmistakable frontman throws a few shapes to the upbeat likes of 'Let's Go To Bed' and 'Why Can't I Be You?' It's simply phenomenal and a perfect finale to Saturday's festivities.

Gary Wolstenholme's full photo gallery from the second day at Leeds can be found here.