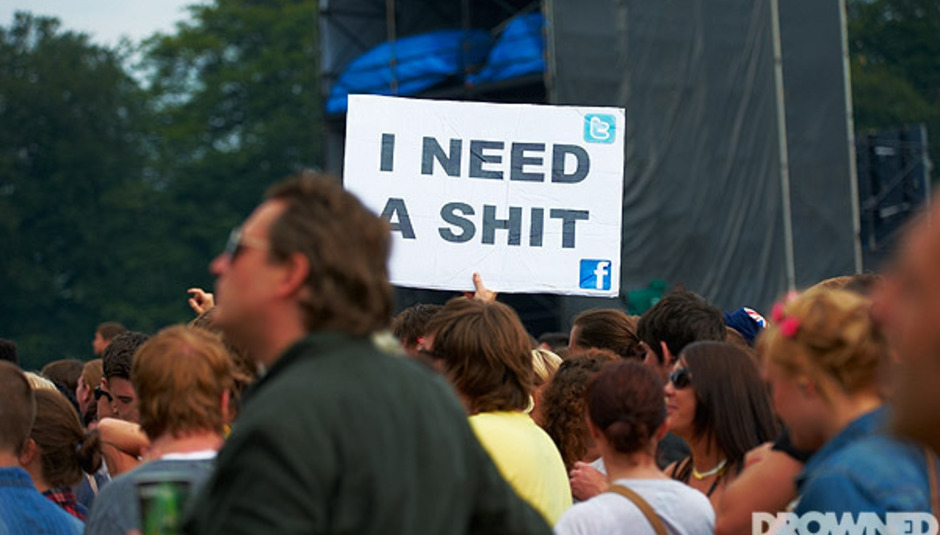 It's August Bank Holiday weekend and it's raining, which can only mean one thing: Leeds Festival. While this year's line-up can best be described as a mixed bag, it hasn't deterred DiS from turning out in force. Here, Daniel O'Dell and Dom Gourlay describe some of the highs and lows from the first day's festivities.

At lunchtime on Friday Django Django took to the NME/Radio 1 tent to make their Leeds Festival debut with the much threatened rain nowhere to be seen. They are one of the bands I was most excited about seeing all weekend having fallen for their self-titled album which is likely to be running with some of the lowest odds as we approach the announcement of the Mercury Music Prize. They take to the stage in jazzy matching t-shirts and kick things off with an intro track and 'Hail Bob', however a few technical problems threaten to derail the song and the band are shrugging at each other confusedly. They manage to claw it back though - a few more of their chasm sized grooves and all is forgotten by the lively crowd. The keyboardist is surrounded by all kinds of electronic apparatus, like a crazed, bespeckled scientist he keeps a heady stream of synth lines and bubbling samples flowing. Default is a pop triumph with it's juddery riff, glorious bassline and tambourine heavy percussion. This is followed by an ominous air-raid siren heralding the set closer 'Wor', which turns into a theme from an imaginary psychedelic car chase. It wouldn't be a surprise if next year they take some of the festival slots Metronomy currently occupy, as higher billings are surely inevitable, and would be very much deserved.

Next up are The Gaslight Anthem on the main stage, which has been decked out in a garish bright yellow, somewhat emasculating the jolly roger flag the band have draped behind them. I wonder what Robert Smith will make of that in tonight's set? The New Jersey band seem to be taking up a residency on those black and yellow posters with this being their fourth Leeds Festival appearance in five years. They begin with crowd favourites 'Great Expectation' and '59 Sound', and when new songs '45' and 'Handwritten' arrive there's much less of a response, surprising as the album (their first on a major label) peaked at number two in the charts in July, very much confirming them as a mainstream band. They play their all-american, blue-collar anthems exactly as they are on the record, complete with some guitar posturing, and whilst you can't deny the band are tight, ultimately it's all rather predictable.

The skies are still raincloud free and seeing the Mark Lanegan Band take to the NME tent's stage in daylight is a weird proposition, completely juxtaposed with their brooding rock and all black attire. They open with 'The Gravedigger's Song' which sounds huge, and Mark clenches the mic stand with a look of disdain across his face. They suffer from a mid set-lull, as the band shift through some increasingly gentle (but never fragile) moments. It comes to life back to life for the sprawling set closer 'Methamphetamine Blues' which gives the lead guitarist a chance to let rip as he meanderingly solos through the final three minutes. It's a set that isn't engrossing enough to convert many new fans but those their from the beginning seem satisfied.

Arriving on site late afternoon means I end up missing all of the above and more. At this moment in time the sun is shining (honest!) and people are chilling out on the grass. Sitting at the back of a tent watching an act like SBTRKT in this kind of climate is something of a new experience, and while it would be fair to say they aren't the most visually exciting band I've ever set eyes on, their jazz-infused drum and bass (no mention of the seven-letter word beginning with 'D' and ending in 'P') is a fitting soundtrack to the summery climate. Of course there's always going to be criticisms about the lack of guest vocalists; DAT tapes and backing tracks disguising Little Dragon and Jessie Ware's non-appearance. Also the time seems a little out of context. SBTRKT are more of a 6am sunrise than 6pm teatime project, but at the same time still provide a welcome respite from what is a largely predictable and unchallenging bill.

Back on the main stage are blues-rock duo The Black Keys. Their last appearance at this weekend was way back in 2003 when they played the Carling Tent. Several of the headliners since that year have split up and reformed again in the band's nine year absence from the festival. In that time the Ohio band have been relentlessly busy grafting the typical record-release-tour cycle, progressively growing their fanbase with each album. After 2011’s El Camino (their seventh album) converted the masses, they return to Leeds Festival with a much greater profile. It's clear to see that the new fans have been investigating their older work too as singles from 'Attack & Release' and 'Brothers' both get their crackling, fuzzy riffs sung back towards the stage. Ending on an energetic 'Lonely Boy' and 'I Got Mine', their high-spirited, retro-rock stylings leave the crowd wanting more - a sure sign that they are headliners in the making.

There isn't a lot to say about The Horrors that hasn't been said before. Their set is the same as it has been for the past twelve months, combining the best bits of Primary Colours and Skying for fifty glorious minutes. But then anyone who's had the pleasure of seeing them at one of this year's festivals would know that already. Each and every song from the opening 'Mirror's Image' through to an epic fifteen minute 'Moving Further Away' that closes the set is delivered with an intensity and panache far removed from the garage rock band that first announced The Horrors to the world six years ago. Members of Toy watch from the sidelines, no doubt studying every move intently. Thankfully there's no repeat of last year's powercut either that halted their performance on the Festival Republic stage. The Horrors ascent continues at a relentless pace. Main Stage this time next year? Don't bet against it...

It's not even 8.45 and Dave Grohl is on stage proclaiming that we're in for a long night lot and a hell of a lot of songs. They begin with the triple salvo of 'White Limo', 'All My Life', and 'Rope' – ironic considering the sound at this point is incredibly ropey, intermittently quiet and lacking any bass. Fortunately it picks up as the career spanning set continues, and plenty of old classics including 'Learn To Fly' and 'Generator' are slotting side by side with the newer material. I could reel off plenty of singles that get an airing, and therefore should be loving what is effectively a best-of set, but there's something irking me. It's dawning on me that each song is taking on a generic shred and shout formula, but its the way that each song is dragged out and robbed of all of its impetus that really bugs me. Powerful moments such as the first two minutes of 'Monkey Wrench', which has the crowd going bat shit crazy, are tarnished by Dave then spending several minutes rambling around the front of the stage and getting in the crowd whilst he continues to noodle the song along. I could let this off on one occasion - he's trying to break down the barriers between the band and the crowd. This doesn't just happen once though, it's beginning to happen on every other song, and if he doesn't go on a walkabout then they are breaking down the song to offer up some lame generic banter that goes on far to long, killing the final chorus before it's even arrived.

They won't be winning any modesty competitions either as Taylor Hawkins declares Dave Grohl to be “the greatest musician of our time”. Not that he's biased of course. Yet I get the feeling that Grohl could do literally anything for the next 5 minutes and everyone around me would lap it up without question. There's no denying it's a great show of stamina by the whole band, and throughout the 2+ hours Dave must do more miles than Mo Farah as he roams stage like an untamed beast. A ticker-tape explosion follows 'Best of You' the band leave the stage at 10.20pm. The band appear on the television screens on the side of stage being off-stage teasing the camera as they discuss if they should play some more songs, and if so how many. Now I could rant for a long time about planned encores, they're the worst. We know you're coming back out, you told us you'd play til you get booted off and there's still 40 minutes left. The screen goes blank and a minute later Dave is back on stage declaring “we have a few more songs to play”. Quelle fucking surprise. The encore opens with 'Times Like These' which Dave begins on his lonesome and many people decide is a lighters-in-the-air moment, which in turn is followed by 'Breakout'. Next up is a slightly bizarre moment as the band are joined onstage by Rufus Taylor, son of Queen's Roger Taylor, who takes a spot on drums leaving Taylor Hawkins on the mic to lead a rendition of 'Tie Your Mother Down'. It was a much needed piece of unpredictability that sadly fell flat in its shear pointlessness. Naturally the band end on 'Everlong', touching the hearts of the mass crowd, and it would have been a grand finale if they hadn't tried their tiresome technique of stopping the song dead and reprising the final chorus for the umpteenth time.

Twenty-something hits later and I should have been feeling physically shattered and mentally invigorated, instead I'm just left unconvinced and pondering if Justice were any good.

Having suffered the first half hour or so of the Foo Fighters endurance test that Daniel has already alluded to elsewhere, solace beckoned in the shape of France's other great electronic musical export, JUSTICE. Playing to a surprisingly half full tent, their uplifting set brings the first day to an energising climax. 'D.A.N.C.E.' and 'We Are Your Friends' predictably draw the biggest cheers, but its the material from most recent record Audio, Video, Disco that translates best. 'On'n'On' and 'Helix' send club vibes into the vacuous confines of the NME/Radio 1 tent and for a few brief moments we're transported to an illegal rave somewhere off the M25.

Gary Wolstenholme's full photo gallery from the first day at Leeds can be found here.