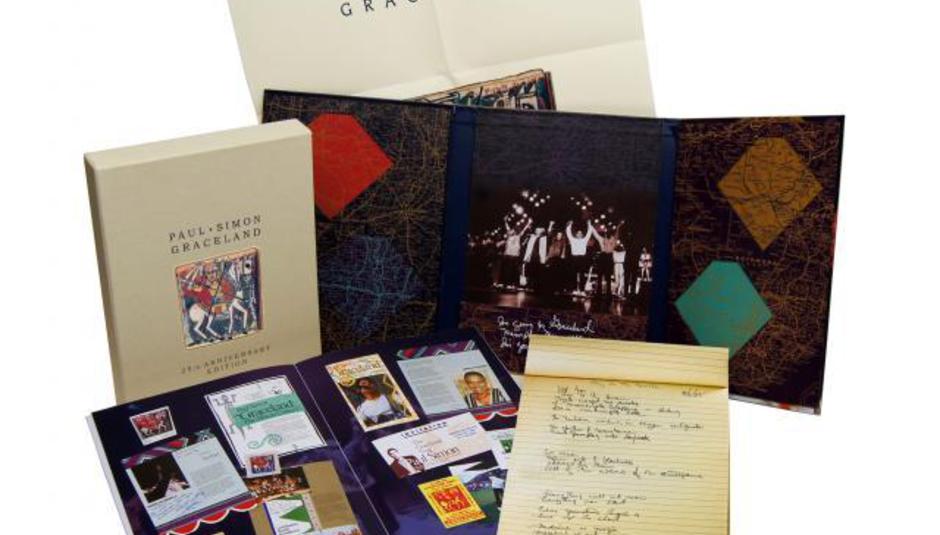 To help commemorate the 25th anniversary, and celebrate the legacy of album, Paul Simon and his 'people' are issuing a special edition of Graceland. This 25th Anniversary edition of the classic album is a bit of a whopper, not only does it feature the re-mastered original album with five bonus tracks (including previously unreleased demos) and an audio narrative 'The Story of Graceland' as told by Paul Simon but it also comes with DVD featuring the Under African Skies film, plus extended interviews, plus the three original music videos and the Saturday Night Live performance of 'Diamonds on the Soles of Her Shoes'. It comes in a big box and there's a book and stuff, which looks like this: To celebrate the release (it came out yesterday!), we have been given a pair of tickets to Hard Rock Calling on 15th July to see Paul Simon perform Graceland live. Blimey! One winner gets those tickets, plus them and the four runners up will win copies of the 25th anniversary edition CD/DVD!

To enter, simply answer the following question by tweeting us Tweet to @drownedinsound or commenting below:

Can you name two or more artists who - in your opinion - were influenced by Graceland?

Competition closes on July 1st and winners will be selected at random. Editor's decision is final. You may enter this competition once ever 24 hours. Please feel free to share YouTube links or playlists, and check back for some special additional content on DiS before we announce the winners.

Trailer for 'Under African Skies'