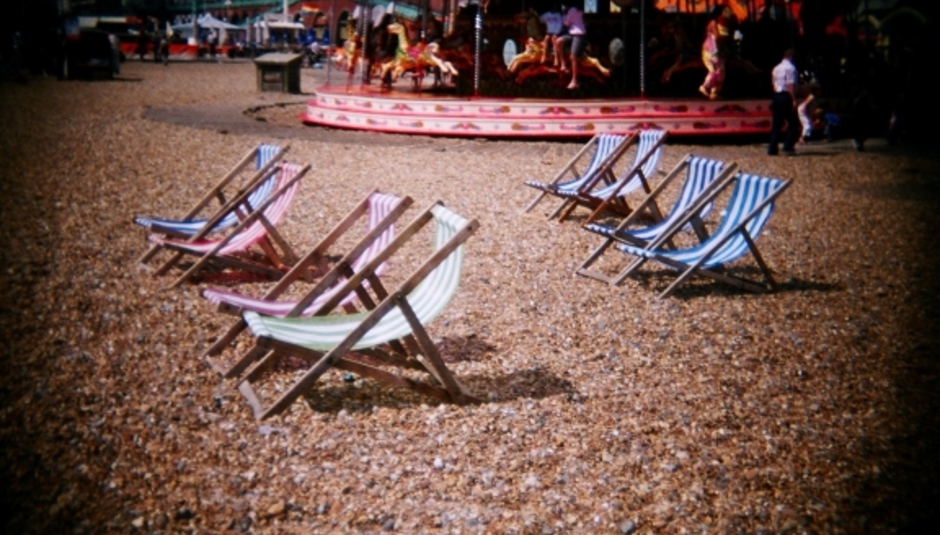 Ah, The Great Escape festival. 300+ acts/bands playing over three days and nights on Britain's beautiful south coast in the city of Brighton.

To say that we are excited is a given, but we might be just as daunted and overwhelmed by the sprawling line-up as you quite possibly are. While we resign ourselves to the fact that we will miss far more of the event than we will actually manage to see, here are five names you should stick on your schedule, double underline and draw little stars around, according to me (the editor of this website).

Eight And a Half

First up, a trio of Canadian gentleman, who deal in the kind of sexy synths that your mother warned you about. The band features two guys who were in The Stills and two guys who were in Broken Social Scene (and yes, there are three of them and that doesn't add up, but we're sure you can figure out how that is possible). Their debut album just came out in North America and they play their first UK dates this week, including Thursday night at the Komedia on a bill curated by some website called Drowned in Sound. We'll be filming their set (I say we, I mean the awesome dudes from beatcast.tv), and lots of other stuff at the Great Escape, which you can watch over the coming weeks and months.

Next, a bunch of chaps from Denmark who seem to have a shattered disco ball in their heart. This is dark party music, cut from a similar cloth as The Knife and TV on the Radio. They made one of the albums of the year last year (#6 in our LPS of the year list) and we're thrilled that they're bringing their truly exceptional live show to Digital for DiS' Saturday night bill, so if you're coming along to see headliners Errors (who we're sure you don't need one of these who to see lists to underscore how much of a must see they are!), be sure to arrive early or to hang around after New Look and The Soft.

Described as chill-rave, ambi-dance, sigh-fi or whatever they hell you want to call this, this collective of minimal-techno lovers from Manchester have somehow created a series of wide-screen after-party anthems. Their live show on the DiS stage last year rattled my very core while its snarky projections made for one of the most exceptional gigs I've seen in a very very long time. Easily the most exciting new band in the UK right now, and if you're not at their set at 12:30 on Friday at Coalition, you'll probably be hearing about what you missed the morning after, the week after and if it's half as good as last year, twelve months after. Be there.

Without meaning to sound like a broken record with glitter in its booze-soaked grooves, we've been banging on about FOE and her Kills-y grungey whirly-pop for a little while now. She headlined our DiS night at Camden Crawl, and she's snuck onto the Great Escape bill at 6pm on Friday at Life (info). Come see what the fuss is all about...

On Friday night, DiS hosts a special evening at St Mary's Church, in association with Brighton Festival and the brilliant Erased Tapes label. Erased Tapes are celebrating their 5th year as a label, and we're sure you've noticed all of the DiS love for A Winged Victory... and Nils Frahm, who will both be performing a set of their heart-stopping, slight, faint, ornate and quite simply gorgeous music that you could file under neo-classical or post-Sigur Ros or whatever silly name you want to file it under that isn't 'brilliant' 'genius' or 'quite simply great music'. We suggest you bring tissues, as things could get a bit tear-jerky...

...and if that wasn't enough tipping, we suggest you also try to catch New Look, EMA, The Soft, Enjoyed, Keep Shelly in Athens, Savages, Deaf Club, Exitmusic, Perfume Genius and, well, whoever it is you wanna see, as we've barely scratched the surface of the 300+ performers. In fact, why not let us know who you're looking forward to seeing and share any daytime show info in the comments section below.

Here's a Spotify playlist which may also come in handy:

...or if you'd rather listen to a YouTube playlist, head over to http://youtube.com/drownedinsound