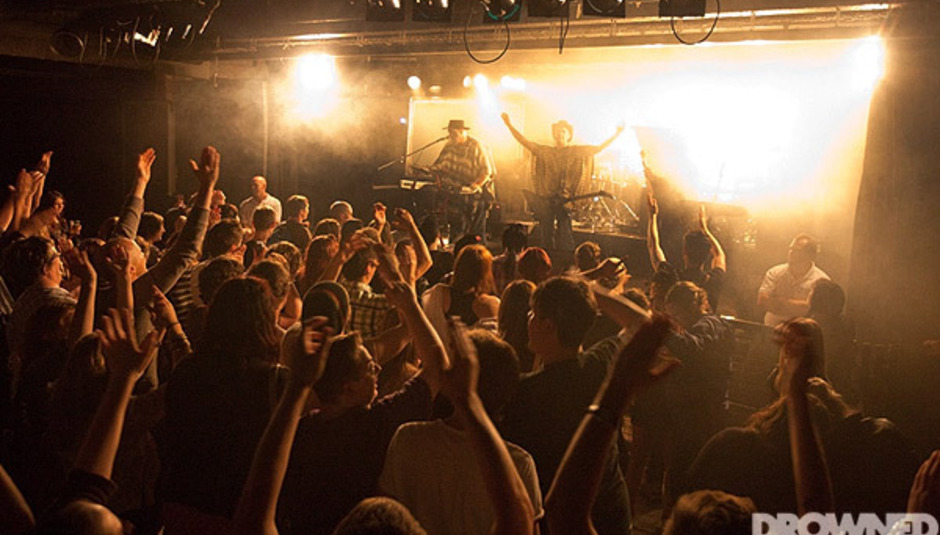 Next weekend, the London borough of Camden will hold its annual and somewhat legendary crawl, and we have a pair of tickets to give away so you can join us there.

We say join us, because on the Sunday evening will be hosting a DiS stage headlined by FOE whose made one of the debut albums of the year (think a brash one-woman Kills meets horror movie wurlitzers) and she'll joined by the likes of Hey Sholay and NZCA/Lines followed by DiS DJs until the early hours of Bank Holiday Monday. Check your programme when you arrive for full details.

That's just our stage of The Camden Crawl, "London's premier arts and music festival", which takes place from 4th and 6th May 2012. And yes, you read the headline correct, we have a pair of tickets up for grabs!

Confirmed to perform at this year's festival is a line-up that features: Death In Vegas, The Futureheads, Alabama 3, Micachu & The Shapes, Gaz Coombes, The Raincoats, And So I Watch You From Afar, Actress, Baxter Dury, The Big Pink, D/R/U/G/S, Charlie XCX and many more. Plus there are comedians include Andrew Maxwell, Henning Wehn, Andre Vincent, Rufus Hound, Patrick Monahan and many others. As is the tradition at the Crawl, surprise guests may appear at any time and at any venue, so you should probably follow @drownedinsound on Twitter and we'll let you know about any secret shows and names added to the bill. For more info and to buy your ticket visit thecamdencrawl.com.

For your chance to win a pair of tickets for you and a friend to Camden Crawl, plus a party bag compiled by FOE from things bought a Camden market, simply answer the following question....

Can you name three or more things which you can buy at Camden's world famous market?

To give you a clue of the sorts of things we're looking for, we took our stage headliner FOE for a walk around Camden market, for a feature which will be up on the site in the next few days, and this is what she could remember when we can her a Generation Game style memory test...

The competition closes at 3pm on Tuesday 1st May 2012, and the winner will be chosen by DiS' editor and notified shortly after. Good luck!

Terms & Conditions: Please note, the prize is just two tickets to the festival and does NOT include accommodation or travel to and from the event.