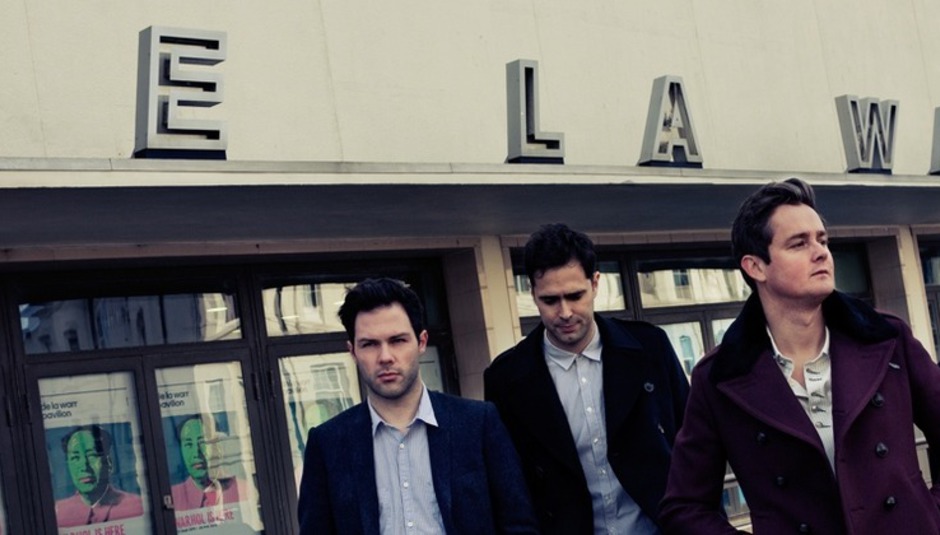 Keane, more than a lot of bands, have made a running theme of the homecoming gig. Even as far back as 2004 they were playing 'locals only' gigs in Battle. Of course with such fervent fans as Keane are lucky enough to enjoy, Friday's comeback gig at Bexhill-on-Sea's De La Warr Pavilion saw audiences from as far away as Argentina; a fact cheerily flagged up by Tom Chaplin when he started pointing out all the familiar faces. Local gig it may have been, but Strangeland's public debut couldn't have been more international if Keane had set up their own special branch of the UN.

The quaint seaside vibe that provides the album's backdrop is all-prevalent, from the choice of venue to the neon light/sunbeam backdrop that provides the set's focal point. It's a nice way of handling the readjustment the band are currently going through, from arena band back to theatre band - and which feels entirely natural, the band having never quite seemed entirely at home in the likes of the cavernous O2. Several years' worth of arena-level bombast, however, have given the band a new sense of how to own an audience. Chaplin is as affable and self-deprecating as ever, even joking about his tendency to declare every song on every Keane album is his all-time favourite. The atmosphere is genuinely summed up best as 'fun' - not the barmy forced fun feel of some of Perfect Symmetry's arena dates, or the weird euphoria of Under the Iron Sea's immediate post-rehab gigs; just happy. The band are glad to be back, and their fans are glad to have them back.

Even given all the above, and given Keane's tendency to do gigs in random places just for the novelty value (see: Brixton's Fridge?!), De La Warr seems an odd place on paper, yet makes total sense when actually there. Between letting people in for drinks a whole hour before opening the auditorium and making sure those who'd been queuing since 6am got their barrier spot - another sign of the devotion Keane's most ardent fans still possess for them - it is probably the most polite and plain nice venue I've had the joy of attending. Like Keane themselves, in fact.

If this gig, and Strangeland as a whole, heralds anything, it's the return of Nice Keane Who Don't Apologise For It. Because they are a nice band, and nice people, who just happen to be absolute pop music nerds. After Perfect Symmetry's trip into Technicolor mayhem, and the plain self-indulgent mess that was Night Train, these songs are Keane doing what they do best: happy anthems from one friend to another about the occasionally glum bits of life. On the evidence of this first listen, lyrically the album sits somewhere between Hopes and Fears' naive romance dramas and Under The Iron Sea's relentless misery onslaught, telling stories of the conflict between personal plans and the universe's detours.

This particular listener's always had a bit of a soft spot for Keane's slightly weirder songs tucked away as album tracks, such as Under The Iron Sea's 'Broken Toy' or Perfect Symmetry's 'Black Burning Heart', so it's a pleasure that one of Strangeland's early contenders for album highlights is 'Black Rain', borrowing not a small amount from Bjork's 'Hyperballad'. Elsewhere, 'On The Road' has a direct line to 'No Cars Go'-era Arcade Fire, whereas 'Day Will Come', 'Disconnected', 'The Starting Line' and first single 'Silenced By The Night' would all fit in anywhere on either Hopes and Fears or Under The Iron Sea. On the basis of this first listen, while it's highly unlikely Strangeland will be Keane's most shockingly different album, it stands every chance of being their most personal one yet.

Keane are never going to be the coolest band on the planet. We all know this. But on the evidence of this gig, they've returned to the sensibilities that originally made them so universally popular. As a band they seem to have finally lightened up, and the whole gig has the feel of getting mates together for a giant knees-up on the beach. Which, I suppose, is exactly what it is.