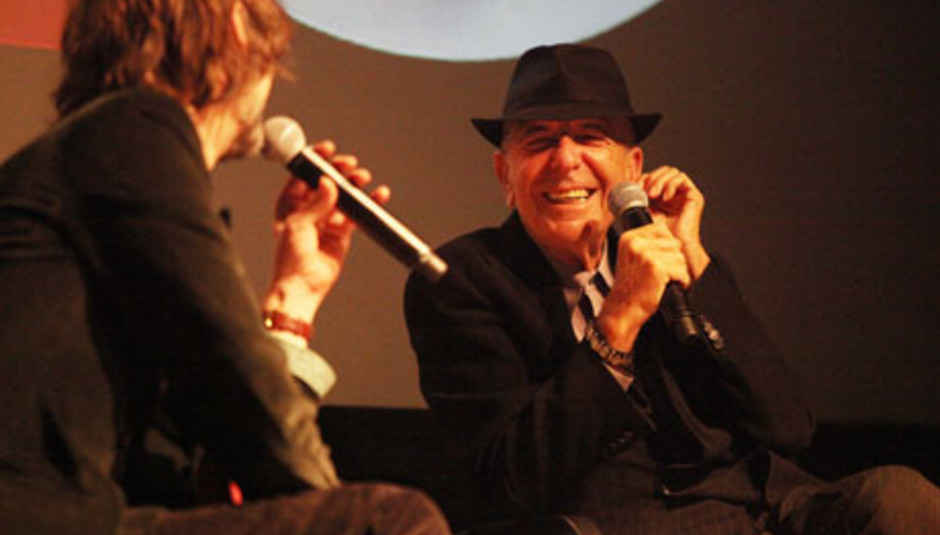 Leonard Cohen was in fine form on Wednesday night when he chatted with Jarvis Cocker in front of a theatre crammed full of what seemed like every music and cultural editor going.

The singer and song writing legend was met warmly by the audience, giving brief thanks and then settling into the playback of Old Ideas, his first new release in eight years, with each song accompanied by projections of lyrics, sketches and Cohen’s handwritten notes on the screen.

Following the playback, Jarvis declared with typical verve that his first ever record was a blatant rip-off of Cohen. Many of the Pulp frontman’s subsequent questions were directed at Cohen’s writing process, with the results offering intriguing yet carefully guarded insights: "I never had a strategy, I always felt I was kind of scraping the bottom of the barrel just trying to get a song together... I never had the sense that I was standing in front of a buffet table, with a multitude of choices." After allowing for some laughter from the crowed, Cohen paused and continued dryly: "There are people who work from a sense of great abundance, and I'd love to be one of them, but I’m not."

Insights were also offered into the recording process - the album was recorded in Cohen’s ‘backyard studio’ mainly using local musicians from L.A., along with an appearance from The Webb sisters who were with him on the last 247 date gruelling world tour. For those anxious to grab a chance to see the man in the flesh, on replying to a question regarding the chances of this record being toured, Cohen seemed keen: "I decided that I'll start smoking again when I'm 80. I'll be 78 this year, so if I go out on tour for a couple of years I'll be able to start smoking on the road. I'm looking forward to that, so it is a possibility."

It was refreshing to see that despite recent hardships and the passing of time Cohen’s gravitas and personality are still as rich in person as on record; his self-deprecation, sharp sense of humour and impeccable command of the English language kept the audience enthralled throughout the evening.

One particular response to a question about the advice he would give to his younger self offered the sweetest glimpse into the machinations of his mind: "I'm reminded of the advice my old friend Irving Layton, who has passed away now but probably is the greatest Canadian poet that we've ever produced, and a very close friend. I would confide in him, and after I'd told him what I planned to do and what my deepest aspirations were, he'd always say to me, 'Leonard, are you sure you're doing the wrong thing?'"