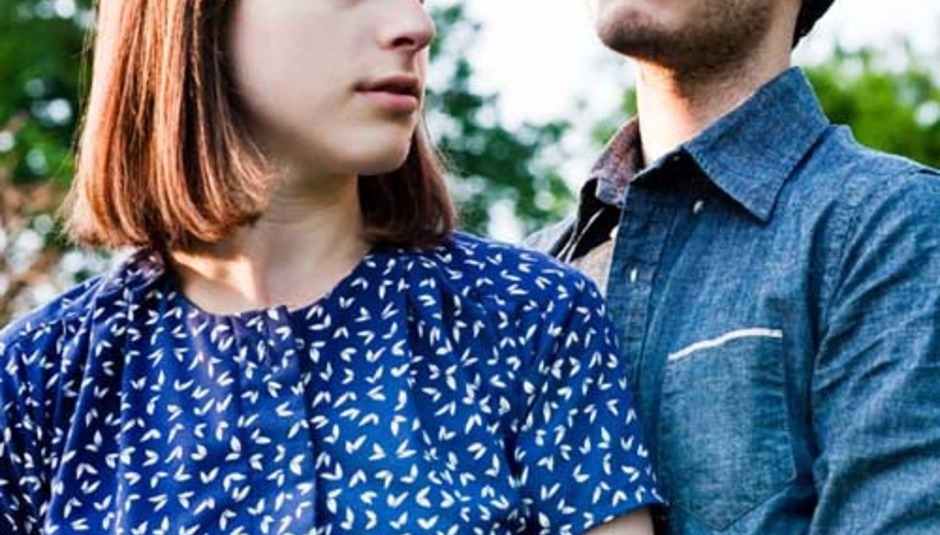 On September 19th, Sub Pop-signed duo Memoryhouse release their new five-track EP, entitled The Years. Yes, if you're a smart person you'll notice it's been released before, but this release is new and improved, with all tracks remastered and remixed, as well as two new added ones.

We've got a stream of it for you to listen to, and you can do that below. However, we've also got some exclusive words and thoughts on the five tracks from Denise and Evan from the band. Think of it as a directors' commentary if you will. That is below also and well, well worth a read.

As a kind of unifying aesthetic, The Years was created with many references to the author Virginia Woolf. The title of the EP quoting her 1937 novel by the same name, To the Lighthouse a 1927 novel, 'The Waves', a song on the original release, another novel written in 1931. Despite popular belief, it wasn't because of the connection to the beach (why would it be?), but to the theme of the passage of time.

For the past few years, I've been fascinated with the illusion of how time seems to overlap over a consistent space. During the recording of the EP I was able to visit a house that I once lived in, but was too young to ever form a full image of it. To my knowledge, no one had lived there in at least sixteen years, but in my own mind, it had not changed since the day I left it. Of course, it was in shambles. A country home, untouched, unentered, in almost two decades. It was like I was watching the paint peel off of the walls, the basement flooding, the wet and cold seep through the windows, and still place my memories in each room they occurred. It was an eery sensation that could only really be interpreted by someone who understood the relationship one has to a specific space and time, to their own static and often distorted memory of something. Somehow Woolf understood this very well.

I tend to view Sleep Patterns as the thesis of the album; when I visit the song, I am specifically thinking about a section of the novel “To the Lighthouse” entitled Time Passes. The chapter, devoid of people, depicts an empty home over time that is slowly degrading, much like my own. Sleep Patterns is about trying to make sense of the feeling of emptiness, of time passing. (There is even a reference to Beckett’s “Waiting for Godot” here as well, for those of you who are super-nerds like Evan and I).

Even though the speaker in Lately spends much of the song wallowing in self pity (“shut me off, shut me up”), I tend to view the song as a somewhat positive moment of personal insight. I had gone through a rather self-destructive winter, which culminated in a hospital-stay with a bad case of pneumonia. Obviously things turned out fine, but at the time, I was flushed with an intense, all-consuming feeling that I was about to leave everything behind. This of course, brings one to think about what kind of legacy they’ll leave behind, after all is said and done. Of course, I’d never really accomplished anything quite on the scale I had always hoped I would, and I was at that age where people tend to shelve those dreams in favor of good old crippling reality.

In this sense, 'Lately' acted as a totem—something to ground that nagging, tenuous desire in the back of my mind that pushed me to pursue creating something bigger than myself. I decided that rather than allow the rational part of my brain to address the long list of reasons why pursuing music was a bad, bad idea (“In this recession!?” – 2008 me) and just did it. This, in effect, was the “shut me off”; it wasn’t so much a plea to pass on, but a fundamental desire to be new again, or to perhaps, make the type of choices you wouldn’t have done in your old skin. 'Lately' was the first original Memoryhouse song, and the second song we ever recorded, a few months after we covered 'These Days' (which greatly influenced the lyrical ideas for 'Lately'). Both songs convey a sweet sense of nostalgia despite being grounded in present-tense anxieties.

I consider this to be a big turning point for Denise as a songwriter. I remember messing around with some piano chords in my apartment, killing time before Denise and I rehearsed for an upcoming performance. I had recorded a quick take that I had hoped to return too before getting up to make coffee for Denise and I. As I was preparing the coffee I could faintly hear Denise singing something in the other room. When I returned, 'Quiet America' was written. Here I’d spent months agonizing over the arrangement for 'Modern, Normal', and Denise, in about ten minutes, came up with the entirely of Quiet America. What struck me was how honest and vulnerable the lyrics and melody where, which again, were completely made up on the spot. We’re generally a band that likes to take our time with music, which will often go through 5-10 stages of demoing and re-writes before we even start rehearsing it (understand why it took two and a half years to write our L.P?), and yet in the blink of an eye Denise came up with a truly sincere, compellingly honest song. Of course, I wasted a few weeks finding a suitable arrangement before realizing the there could be no greater service done to the track beyond letting Denise sit alone in a room with the piano and hammer it out.

'Modern, Normal' refers to a poetry collection entitled Modern and Normal by a Canadian writer named Karen Solie, which focuses on the alienation associated with living in the city. While 'Sleep Patterns' conveys a more nostalgic sentiment, 'Modern, Normal' reflects an alienation affiliated with being forced into a state of constant progression; knowing that everything is fleeting, that everything will eventually be rebuilt or replaced. In a North American city things rarely reach old-age, instead they are replaced well before their time.

To the Lighthouse: by Evan Abeele

To be honest, this song has more to do with The Great Gatsby than Virginia Woolf's novel. In Gatsby, the green light at the end of pier represents a permissible, if just unreachable, dream. While we were writing this song, I was considering the caveat of products and influences being sold to us and whether we really want them. The speaker in the song experiences a sensation likened to drowning when considering all the things that are being dangled in front of them (“...houses in the sky”), always seeing time as a deadening weight against their own sense of achievement. Ultimately the speaker finds a sense of liberation in human connection where matters of time and commerce need not be considered.