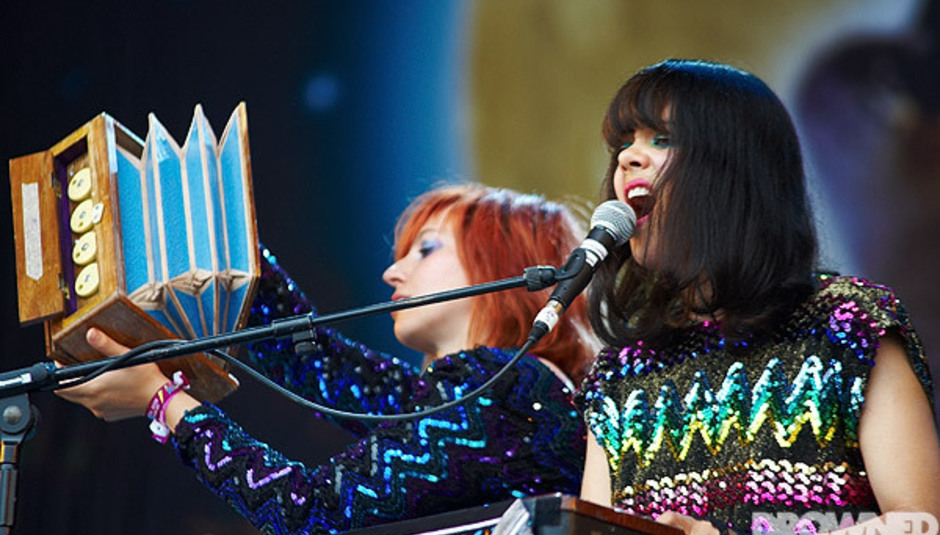 Following on from January's highly digestible news round-up by Pete from the fantastic TwentyFourBit blog, we've evolved the concept and come up with a world first, of sorts, we'll let him explain...

Given that a lion's share of music news is of the "Hear this new song by..." variety, we thought it best to catch up on the past month or so within the context of the tunes themselves. At best, I hope to serve up a healthy dose of the cream of the crop, while the worst you might endure is a tasty feast for your ears above some recent facts to complete a well-rounded stew of new tune nutrition. So, without further ado, behold! The first-ever music news mixtape.

Nick Cave not only boasts a brilliant knack for keeping his schedule booked year-round, but the certifiable Rock God also seems incapable of taking the slightest misstep along said travels. In recent weeks, for example, Cave (with the Bad Seeds) announced four bonus-packed reissue LPs, was recruited as the music consultant on Guillermo del Torro's 3D Pinocchio adaptation, had his script and score to John Hillcoat's The Wettest County in the World greenlit, and turned in the trademark commanding vocal performance on UNKLE's "Money and Run" streaming above. Did all this work require a break from booking future tour dates? Nope.

In addition to turning the sophomore slump myth into mist upon the release of her fabulous 2009 LP, Two Suns, Bat For Lashes' Natasha Khan has since proven that another potentially daunting task for up-and-comers -- cover renditions of songs by long-beloved artists -- are well within her grasp. Khan has performed lauded takes on Radiohead, Bowie, Peter Gabriel, and even David Lynch classics, but perhaps her most ambitious effort yet arrived last month in the form of a faithful studio version of Depeche Mode's "Strangelove" for Gucci. In January, she reprised a number of string quartet-backed covers first unveiled in '10. Seems Khan should have plenty of inspiration for the next Bat For Lashes record said to be in the works.

Fleet Foxes have spent a year laboring over their next record, sure, but singer Robin Pecknold can apparently churn out gorgeous folk tunes in his sleep, as he met up with producer Noah Georgeson (of Milk-Eyed Mender fame) and Grizzly Bear's Ed Droste to record the original song above and two other tunes for a free release this week -- a preview, perhaps, of the pretty pastoral harmonies you can catch live in North America or the UK this spring.

While Laura Marling's meteoric 2010 rise to fame on the back of her game-changing second LP is truly something to behold, the English heir to the new-folk crown is just getting started. In addition to recording Jackson C. Frank and Neil Young covers with Jack White and winning a Brit Award for Best Solo Female Artist, Marling has kept busy previewing material for her third album -- reportedly her second collaboration with producer Ethan Johns -- on various live outings. Hear Marling perform a revamped take on a Joni-esque gem originally written by her father above, watch the BBC 2 Radio Folk Awards performance here, and preview 5 more new songs in the live clips here.

Perhaps some newly reunited bands have trouble revitalizing that hit-making creative spark of yore, but frontman Ric Ocasek and surviving original members of The Cars simply hopped into the DeLorean, set the dial back to 1978 and conjured up their first set of new music in 24 years, Move Like This, with surprisingly authentic results. To wit, stream our first taste of the LP above and spy "Blue Tip"'s snazzy new silhouette-starring video here.

The latest new music from The Knife's Karin Dreijer Andersson and her Fever Ray project arrived this month in the form of this appropriately haunting contribution to the new fantasy thriller Red Riding Hood, directed by Catherine Hardwicke, of Twilight fame. In other Andersson news, she will be joined by The Knife's Olof Dreijer to teach a workshop at a Swedish music camp for teenagers in June. A rare (and educational) outing for the enigmatic duo indeed. Luck kids!

Sondre Lerche will follow up 2009's Heartbeat Radio with his sixth LP, an "intimate and intense" self-titled effort, on June 7 via Mona Records. Three months prior to the release, though, you can hear the first (beyond-promising) single, "Domino." The song features all of the unforgettable, jazz-pop-inflected melodies we've come to love from Lerche, as well as welcome distorted-guitar experimentation and a heartbeat/kick drum-punctuated bridge, all set amid a natural sonic landscape where his well-honed craftsmanship benefits from a spontaneous studio spirit. Hear it above, and catch Lerche on tour at SXSW next week or in June.

Death Cab for Cutie frontman Ben Gibbard previewed two new songs -- the title track for his band's forthcoming (May 31) album and a song he wrote for the new Russell Brand-starring Arthur remake -- in San Francisco. One lucky attendee of the solo gig, Tony Carreno, capture some great audio of the performance, including the piano-backed new DCFC tune, "Codes and Keys," above and more here.

TV On The Radio - "Caffeinated Consciousness"

TV On The Radio have returned with a new album, tour, and pair of teaser singles off their latest LP, Nine Types Of Light, due out on April 12 via Interscope. Our first preview, "Will Do," reached our ears late last month, but it was quickly followed by another (better?) cut, "Caffeinated Consciousness," which is a bit more reminiscent of their past material and available to download for free here.

James Blake - "A Case of You" (Joni Mitchell Cover)

James Blake has been everywhere lately, as the London singer/songwriter/producer is undoubtedly one of the first breakout stars of 2011 following the release of his self-titled debut LP that DiS reviewed last month. You can get caught up on what all the hype is about by checking out his Feist cover, recent concert photos, and the video for Blake's single "The Wilhelm Scream," which  -- in an odd bit of news -- was revealed to have been inspired by a song his father wrote in the '70s. Also written during that period was the Joni Mitchell song above, covered beautifully live on BBC Radio 1 in February.

Frontman Alex Turner let drummer Matt Helders share vocal duties on our first listen to the Arctic Monkeys' fourth album, Suck It And See, their 12-track follow-up to 2009's Humbug, which was produced by Simian Mobile Disco's James Ford. Meanwhile, Turner has been off moonlighting on his first solo project: an EP/OST for Richard Ayoade’s directorial debut film, Submarine. You can catch a glimpse of Suck It single "Brick by Brick" above, or alongside picturesque footage of the boys on Los Angeles Beaches and recording at the same city's Sound City Studios (where the LP was put to tape) here.

If lead-off single "Wake and Be Fine" is anything to go by, Okkervil River's forthcoming album, I Am Very Far, will be a fine addition to Will Sheff and Co.'s consistently evocative and always intellectually stimulating discography. Perhaps the best harbinger for OR's LP6, though, is the stunning, elegiac B-side "Mermaid." Please do me a favor and stream one of the best odes to a mythological creature to date above, then download an album cut alongside the tracklist here. And finally, given Sheff's literary prowess, I'd be remiss in not pointing to his excellent Grammy diary, as well as Crumbler's pull-quote from an article by Austinist concerning a certain award show after-party. (Hint: All of your "What's with the 'Who is Arcade Fire?' crowd frustration will be resolved.)