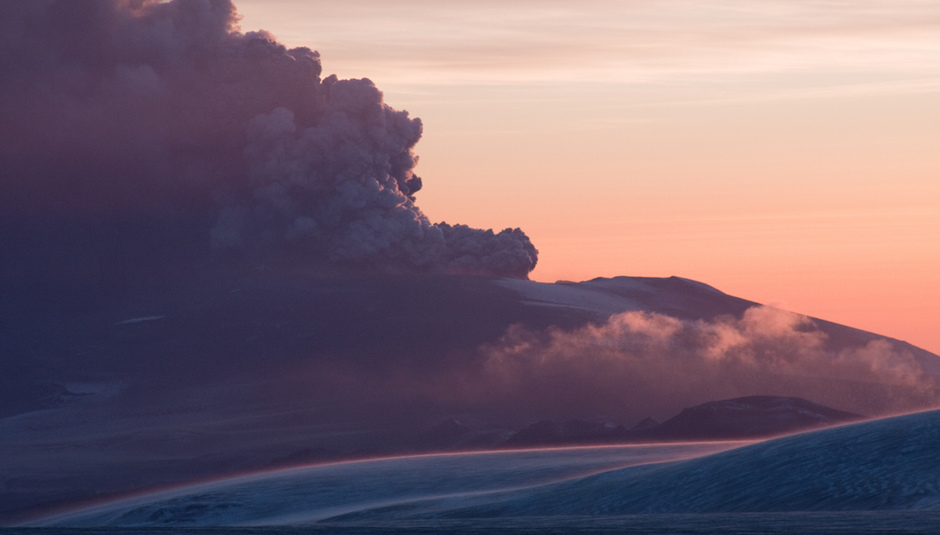 The cloud of ash from the eruption of the Icelandic Eyjafjallajoekull volcano is continuing to cause major problems for not only bands trying to get out of the country but now also artists trying to get into the UK.

The latest (relatively major) acts to be affected by the airspace restrictions above Europe and the UK are LCD Soundsystem and Crystal Castles. The James Murphy-led group were due to play in Dublin with YACHT on April 20 and 21 but reports suggest that both shows have now been pulled. This isn't happening.

Now Toronto's returning glitch-core masters Crystal Castles have been forced to postpone their London performance, which was due to take place at Heaven tomorrow, for similar reasons. A quick Google search for "shows postponed" also reveals that Gary Numan is unable to play his San Francisco and Los Angeles shows and has had to postpone.

Flight restrictions have been in place since Thursday and although several airlines have undertaken test flights into the cloud of ash with no reported problems, the prospect of anything like a normal service returning soon looks unlikely. More bad news is that Chris Moyles failed to make it in to his morning Radio 1 Breakfast show this morning. It's unknown when he'll return.

Since the problems are very much ongoing, we've decided to operate a 'liveblog' on any further cancellations or postponements of musical projects in the next couple of days. If anything happens, that is.

1620: More good news. Or some, at last. The restrictions on airspace in the North of the country look like they'll be lifted from 0700 on Tuesday. Restrictions could still remain in place in England and Wales tomorrow, though the outlook on the situation is improving.

Elsewhere, Los Campesinos! have had to cancel an American show tonight and a performance in Toronto tomorrow.

1448:Right, things seem to have slowed down somewhat, which I guess is, in part, a good thing. Another good thing is that it has been confirmed that Bear In Heaven will indeed make it to their show at The Lexington in London tomorrow. They got onto a ferry some hours ago, so should hopefully be Beef-side soon.

1339: Fear not fans of Efterklang, the band have some UK dates lined up but they say that no shows will be affected and they'll travel by bus, ferry or whatever means necessary to make the shows. Hooray! Concerns still remain about Sunny Day Real Estate, who are due to play London's forum on Thursday. Given the optimism abounding (well, partly) from the results of some of the test flights currently in operation, it may not be too much of a problem. But don't hold your breath...

1311: We have heard it from a reliable source (their PR) that the LCD Soundsystem shows in London on April 23 and 24 WILL be on as the band will be flying to Madrid and then driving to London. Good news indeed! And fair play to them, too. I hope this works out.

1222: As Manish (down there) points out, the Besnard Lakes show is still on, it's just that Double U won't be able to make it. Also, the Crystal Castles show at Heaven has now been re-scheduled for May 19, with all tickets being valid. Hopefully this will all have blown over by then, eh?

1152: Get the feeling that I'm going to have my work cut out here. I NEED TO GO TO SAINSBURY'S ALREADY! Anyway, a couple of further updates on the Whale Watching Tour with Sam Amidon, Ben Frost, Nico Muhly and Valgeir Sigurðsson. Several dates have now been cancelled, which at the moment consists of April 20 at the Barbican and April 21 at the NCH in Dublin, though further shows in Gateshead, Bristol, Reading and Manchester are all likely to be affected if this continues. The London date has been rescheduled for September 27, and the Dublin show's new date will be confirmed soon.

But, as Valgeir Sigurðsson, a native of Iceland, points out, it could be worse and it's best to remember that, annoying as this all may be, there's a volcano erupting in Iceland...

1126: Oh dear. This is just going to get worse all day, isn't it? And possibly all week. The legendary Gil-Scott Heron's 'conversation' - scheduled for today - as part of the South Bank's Ether Festival will now not be taking place, according to his label XL Recordings. The live show tomorrow, however, is still pending. Fingers crossed.

Elsewhere in the land of XL, they've also just confirmed the postponement of Karen Elson's gig at the Slaughtered Lamb tonight.

1102: French 'dreampop collective' Double U have had to cancel their support slot for The Besnard Lakes at Sonic Cathedral, Legion, London. That was meant to take place tomorrow, April 20. As the press release points out, this is most ironic. Camille, of Double U, is in fact an air traffic controller. They hope to be able to play at London's Cafe Oto next Friday, however.