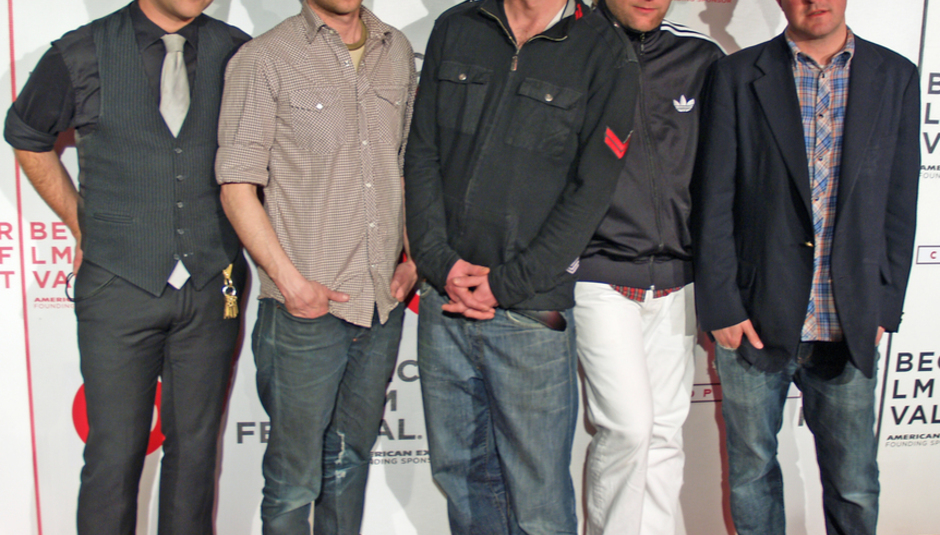 The Hold Steady are still going strong after losing keyboardist and mustachioed fellow Franz Nicolay, and have just announced the release of a new album, Heaven Is Whenever, for May 3 on Rough Trade. It's the Brooklyn band's fifth studio record, and the first since 2008's stonker that was Stay Positive.

The band - now made up of Craig Finn, Tad Kubler, Galen Polivka and Bobby Drake - roped in Dean Baltulonis, who also worked on Almost Killed Me, to produce the record, which was recorded in New York state as well as Queens, NYC.

Lead singer Finn tells us that the record is about “embracing suffering and finding reward in our everyday lives” and that the process of playing the new tracks on tour helped the band sort out the what from the chaff, as it were.

Full tracklisting is below:

Tad and Craig also answered some questions about the album. There are many, so we've attached a couple from each below.

How is the new record different from Stay Positive?

Tad: I think this is a much more dynamic record than anything we've done. I feel as though the last four records, with the exception of the odd track here and there, have been pretty much loud rock albums.

This album is sonically more diverse. And I really believe it exposes new elements of the band that we hinted at on other records but weren't able to fully realize until this one. Rather than just concentrate on changes in instrumentation, we made changes to the song writing process. And this helped everyone to experiment not only with their own instrument and where they should play, but where they shouldn't. This record doesn't feel as dense. It feels more spacial. We weren't trying to get a dozen different ideas on a song.

Craig’s mentioned in the past that making an album teaches you something about yourself, what did making Heaven Is Whenever teach you?

Tad: Because we recorded this record over the course of six months, I don't know if I can even begin to explain what occurred in that period of time. Personally, I could squeeze a novel out of it. Or at least a screenplay. And if I think of it in terms from when I first wrote the music for what would eventually become 'Sweet Part of the City' to the time we finished mixing 'Slight Discomfort'... You've got to be kidding...It would have seemed so much more appropriate to title this fifth album Almost Killed Me.

What are the album’s main lyrical themes? Do any of the old characters show up?

Craig: The lyrics speak a lot about struggle and reward. Its about embracing suffering and understanding its place in a joyful life. I think that some of the characters from old records are there, but I don't name them by name. I think it continues to examine the highs and lows that we've looked at on previous records.

What’s the significance of the title Heaven Is Whenever?

Craig: It comes from a line "Heaven is Whenever / We Can Get Together". I think it has to do with the way that love can help us rise above our modern struggles. It also speaks to how I feel about our shows, the communal aspect of the audience and performer.

There's also a brief European jaunt, all dates in June: