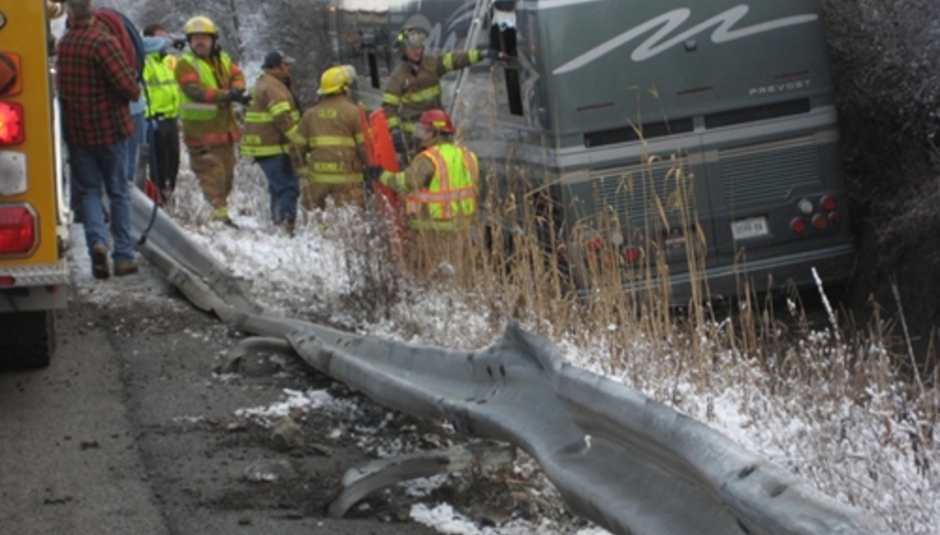 Weezer have cancelled the rest of their current North American Raditude tour, after a bus crash yesterday in which frontman Rivers Cuomo was injured. Though Cuomo was not seriously injured, he remains under observation with three cracked ribs in hospital. That's still pretty bad, though it could have been a heck of a lot worse. So that's something to be thankful for.

"We are sorry to say that the rest of the December Raditude Tour has been cancelled - when we can reschedule the dates we will, of course. I have no ticket or refund or whatever info at this time, but stay tuned to this site and the ticketing websites for more info. For now its a waiting game for all of us. Thanks for your kind thoughts and good wishes, we need them!"

The bus crash happened yesterday at around 7AM EST (12 noon UK), about 40 miles west of Albany, New York state. The vehicle was carrying Rivers, his wife, their child and other assistants when it slid off the road and ended up in an 8 foot deep ditch off the side of the Highway, having ploughed through a barrier on the roadside. "Both Sarah [Cuomo's personal assistant] and Rivers' wife were pitched out of their upper level bunks onto the floor five feet below," the blog explained.

"Somehow Rivers' wife was uninjured, but Sarah sustained two fractured ribs and a fractured lower vertebrae. The baby daughter was in her crib unit and was fine, as was the nanny who was sleeping near the floor in her bunk at the time.

"However in the back lounge, Rivers was tossed around violently, waking up as he landed back on his mattress. He recalled not hitting anything, but later we learned that he must have, as he cracked three ribs and sustained some mostly minor but very painful internal damage, as well as hurting his lower leg somehow."

We wish them all a speedy recovery, and a relatively pain-free Christmas.