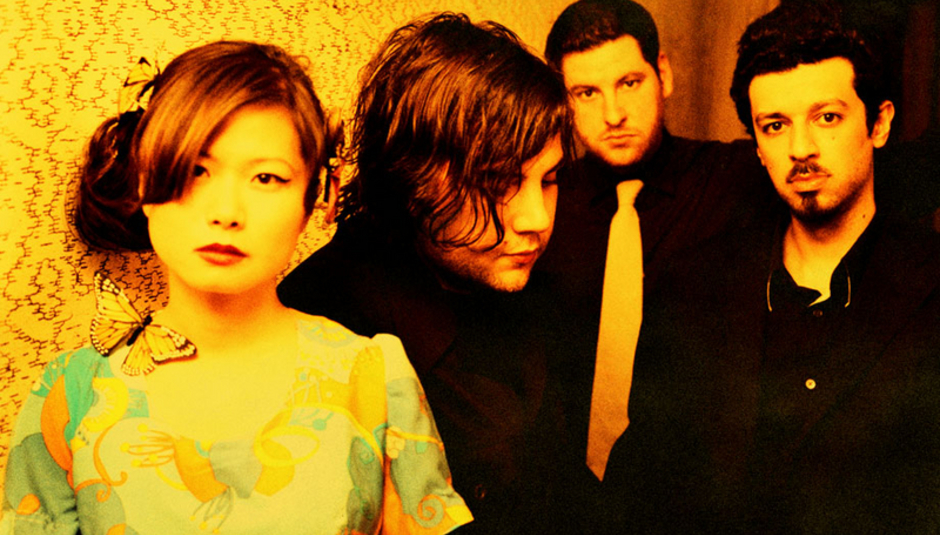 Touring is an expensive business, especially abroad. I mean, you've got flights, food, renting a tour van or bus and about a million other things to do...that's before you think about feeding the cat you've taken with you. Lotta dollar, to be frank. We've just found out that New York quartet Asobi Seksu are all too aware of that and, as a result, they're asking their fans to help fund (in a way...more retrospectively) their upcoming UK tour with White Lies.

The fundraising project, on KickStarter, hopes to raise $7,500 by the end of the year. On it, the band explains the reasons behind their decision to ask for financial help:

"In a couple of weeks we fly to England to tour with a band called White Lies, who are a very big deal over there. We're thrilled that they've asked us to play because it means we'll be performing in the largest venues we've ever played - and for a lot of new people who probably haven't heard much about Asobi Seksu. Such great exposure is priceless, and a wonderful opportunity for us."

"Support bands on large tours like this make next to nothing. The headliners rely on the fact that the exposure is incentive enough – so they don’t offer much in the way of actual money. It’s nothing against White Lies – we most definitely appreciate the chance to tour with them. It’s simply the nature of this business we’re in.

"And since we're traveling all the way to England from New York, we have to spend a lot of money on necessities: plane tickets, gear rental, van rental, tour manager, sound engineer, hotels (even the cheap ones without heat are expensive!), gas, food, etc. These costs add up quickly, and each day we'll spend more money than we earn. So we actually stand to lose over $10,000 on the tour. That's the trade-off to play for 4,000 people a night, instead of, say, 300. Worth it? We think so!"

So, there's the reasons. All perfectly valid and understandable, really. At present the band have raised nearly $3,500 of their target total, the time for which ends on December 31...so, just 50 days left! There's a minimum pledge of $1, but, really, if you were going to donate and didn't want to donate more than a dollar then shame on you.

THAT is not all however, you will get something in return for your donation.

For a donation of:

$5 or more - A digital download of the entire acoustic album.

$15 or more - A signed physical copy of the Transparence 10” (on clear vinyl!) which was released in August + the acoustic album download.

$25 or more - A signed and personalized Asobi Seksu poster + a signed physical copy of the Transparence 10” (on clear vinyl!) + the acoustic album download + Asobi Seksu buttons.

$35 or more - A one of a kind hand-screened Asobi Seksu t-shirt + a personalized thank you postcard + the acoustic album download + Asobi Seksu buttons.

$75 or more - A signed limited edition LP of the acoustic album, ReWolf (on purple vinyl!) which also includes a digital download code for the album + a hand-screened t-shirt + Asobi Seksu buttons + a personalized thank you postcard.

$150 or more - Your name on the liner notes of our next album, to be released in 2010 (we will be recording the album in April). It will say “Asobi Seksu would like to thank...” and your name will follow! + a hand-screened t-shirt + the acoustic album download + a personalized thank you postcard + Asobi Seksu buttons.

$200 or more - We will dedicate a song to YOU on stage! Just let us know which song you want us to perform - and at which show - and we will give you a shout out on stage before we play it (check myspace.com/asobiseksu for dates) + your name in the liner notes of our next album + a hand-screened t-shirt + the acoustic album download.

$250 or more - Backstage access after one of our shows (you must have your own ticket to the show - check myspace.com/asobiseksu for current tour dates) + polaroids with the band + your name in the liner notes of our next album + a hand-screened t-shirt + the acoustic album download.

$500 or more - 2 free tickets to any show on our current itinerary + a song dedicated to you during the show + backstage access after the show to take polaroid pictures with the band + your name in the liner notes of our next album + a hand-screened t-shirt + a signed CD or LP of your choosing + the acoustic album download.

$750 or more - Attendance to a private (invitation only) acoustic Asobi Seksu performance in Brooklyn, NY. We will be filming this show and using the videos for promotional use online. You will also receive polaroids with the band + your name in the liner notes of our next album + a hand-screened t-shirt + a signed CD or LP of your choosing + personal thank you postcard + the acoustic album download.

$1,500 or more - A dinner date with Asobi Seksu! You and a friend can join the band for dinner in London on November 21st (limited to one donation) + polaroids with the band + your name in the liner notes + tickets to the London show on November 19 or December 7 + backstage access at the show and polaroids with the band + a hand-screened t-shirt + a signed CD or LP of your choosing + the acoustic album download.

$2,500 or more - Spend a day in the recording studio with us while we make our next record. This will take place in New York City sometime in March/April 2010. You'll also receive an assortment of things like a signed LP or CD, photos with the band, hand-screened t-shirt, the acoustic album download, the original drawing and our eternal love! Limited to one pledge.

So, um, there it is. That's an awfully long list of things you can win. A mention in the liner notes would be pretty good value for money, though, I guess. Great if you were particularly egotistical. Dinner date, not bad. Anyone interested?

You probably won't feel like reading another list after reading about 100,000 words of them already, so I won't stick the tour dates in here, it might make your eyes go funny/force you to have another cup of coffee/prozac. Instead click here to find out.