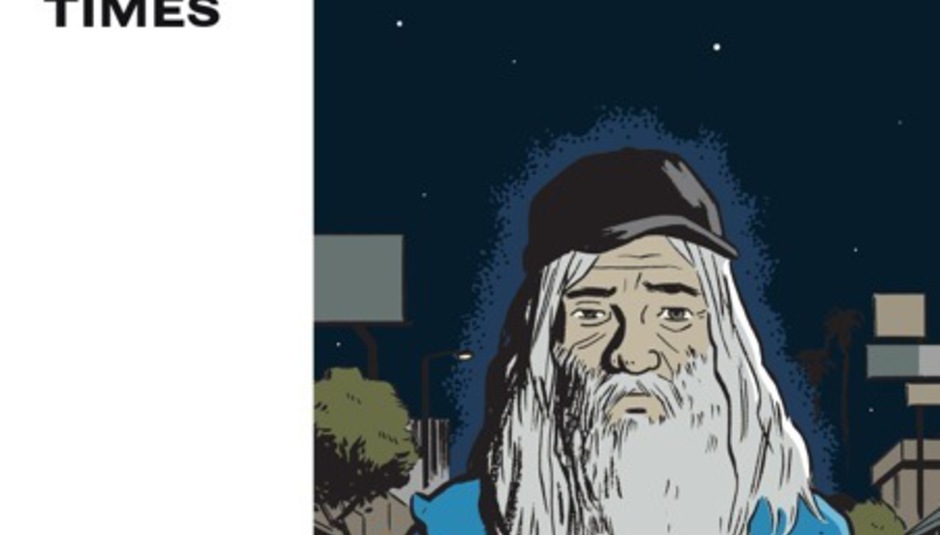 Eels. Remember those fellas? Yeah, quite good weren't they? They haven't completely dropped off the radar, in case you were wondering...Of course, they released Hombre Lobo earlier this year which was, y'know, so-so.

Anyway, they've got a new one on the way, so they announced last week. On January 19 (US TIME) they'll release End Times, with most of the album's tracks being recorded in Mr E basement studio. Nice. (via Pitchfork).

To follow on from that, more details and specifics have emerged about the album. The first is the artwork, which will look like this: Is that meant to be GOD as a homeless man? Just a homeless man? The End of Times? The End of Days? Heck, maybe it's even E. in 25 or so years? Who knows what the hell is being suggested in this cover? ALL I KNOW is that I now want to watch King Of The Hill forever more, which I may well do. Possibly some Aqua Teen Hunger Force, too...

There's also a confirmed tracklisting for the album, which consists of fourteen tracks of varying length, we believe:

Pretty characteristic Eels-style titles then. Maybe this one'll throw up a few surprises too. In the meantime, watch the video which was posted the other week for 'That Look You Gave That Guy', from HL.