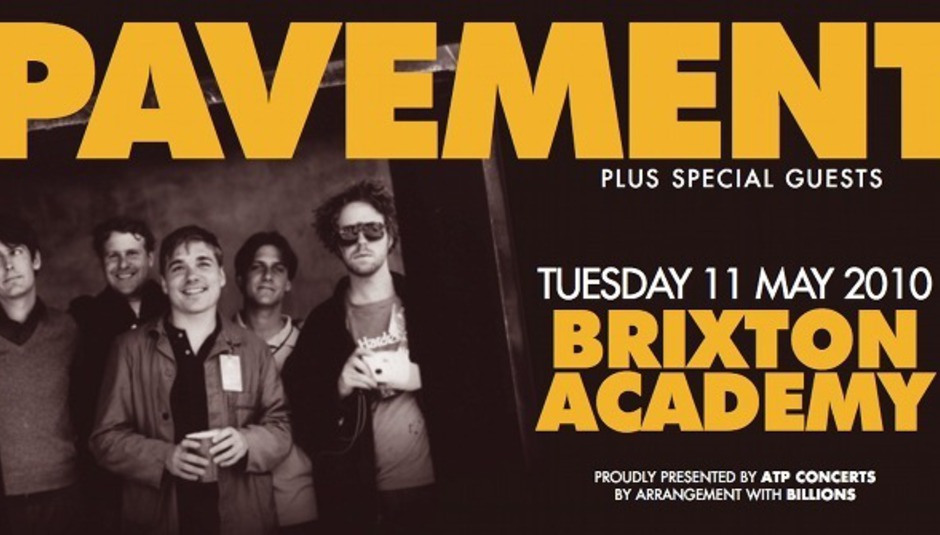 Pavement to play London show, The Fall added to their ATP

I'm not entirely sure how much longer I can go on being excited at the latest Pavement announcement or whatever but, I guess, this one's pretty good if you've not managed to get tickets for the Pavement curated ATP which has, incidentally, now SOLD OUT.

The news this time is that the band have added a London show to their touring schedule, which currently sees them curating and headlining an ATP, playing New York in September as well as taking a trip over to Australia to play a festival.

So, yeah, the soon-to-reunite indie rock legends will be playing The Brixton Academy on May 11, which is pretty soon indeed. Where can I get my ruddy tickets from, you ask. Well, tickets will be going on sale 9AM this Friday, October 23 BUT there will also be a pre-sale sort of thing for O2 customers from Wednesday, and Academy venue customers from 9AM on Thursday. Supports are yet to be confirmed.

You can get the tickets from any one of these following websites:

In other Pavement related news, you may have noticed that they're also curating one of the May 2010 ATP fesitvals! That much is true, and today there have been some jaw-dropping new additions to that particular festival. We say new additions, but they are in fact the first line-up confirmations, and here they are!

There you have it. The motherhumping Fall, ladies and gentlemen. Not a bad start at all. Some eagle-eyed and perceptive people have pointed out that one member of Quasi used to be in Sleater-Kinney (Janet Weiss) and got all excited. That would be kinda next-level, wouldn't it? Still, it COULD happen!