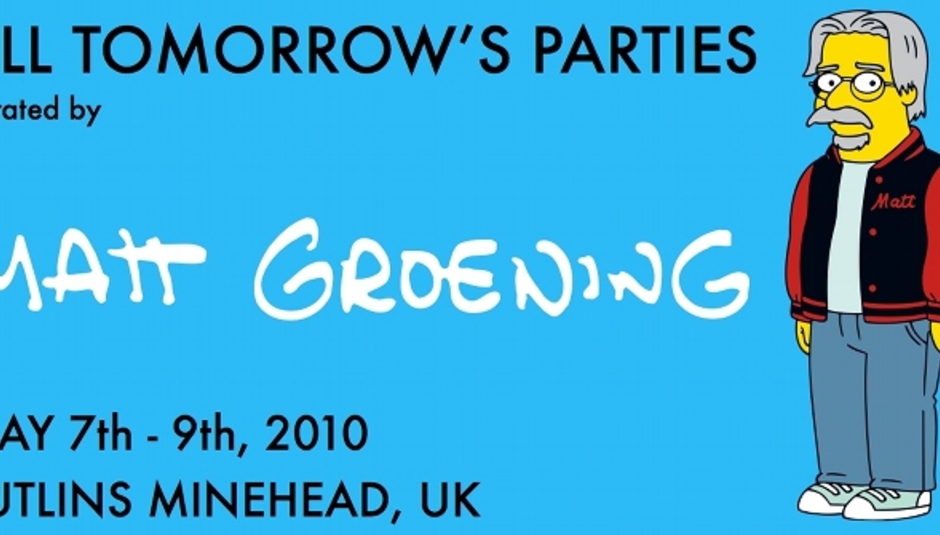 Errrrrrr just when you thought things COULDN'T get any more high-level at ATP HQ - what with the announcement of a Pavement curated ATP for May 2010 - they just did, and hit another stage altogether, quite honestly.

Matt Groening - yes, MATT GROENING - has just been announced as the curator for the first ATP May weekend at Butlins, Minehead. Of course, you may/should/will recognise the name, if not the face, as MG is the creator of The Simpsons and other such important shows like Futurama. This particular weekend takes place May 7-9 2010.

That said, Groening is not exactly 'new' to the whole 'curating ATP' thing, as he did exactly the same for an ATP festival in Long Beach, California waaaaaaaay back in 2003. Just to give you a slight indication as to his musical tastes, here's what the line-up was at the time:

...which is relatively stellar. FOR THOSE LAZY AND OVERLY EAGER ONES OF YOU WHO JUST SCROLLED DOWN TO SEE A LINE-UP, PLEASE NOTE THAT THIS IS NOT THE BILL FOR NEXT YEAR'S MATT GROENING CURATED ATP. IT IS, IN FACT, THE LINE-UP FROM 2003.

And here's an interview he gave at the time, should you wish to delve deeper into his mind.

BUT WHEN WILL THIS YEAR'S ACTS BE ANNOUNCED, you ask? Well, we just don't know.

Full-price tickets go on general sale at 0900 this Friday, October 16. With the general sale there's also going to be a small number of Early Beard tickets available with a £10 discount, which will be available for roughly a week. Thus (room only), early = £150, normal = £160.

ATP are also offering the usual instalment tickets as well as other such details which are listed on the official website.

If you have any amusing Simpsons/Groening vs. bands/artists puns then please post below. I'm running on empty and the best I've got is Bonnie 'Prince' Willie The Groundskeeper. Poor.