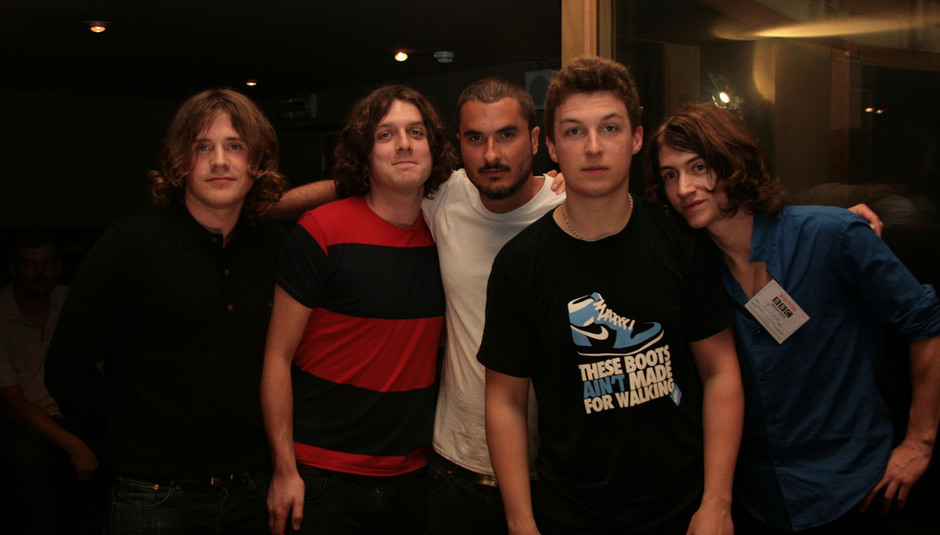 Footage and setlist from the Arctic Monkeys Maida Vale show is below but first, DiS' editor was invited along to watch it up close, here's his short report.

On Monday night, Zane Lowe's Radio 1 show heralded the return of the Arctic Monkeys, with them doing a live set in the small tiny studio where everyone from Pulp to The Pixies recorded sets for John Peel. And probably much bigger bands like Pink Floyd and wotnot too.

There are only 40 people here, on a balcony in the historic studio. There are some folks from Domino Records and some BBC staff - stood to my left is Nick Grimshaw, sat on the stairs to my right is Edith Bowman. Stood directly beneath me is Alex Turner, he's wiry and rocking a desert tan. At his feet is a muddle of cables and pedals. To his right several keyboards (and who I think is a new member of the band). Then as you can see in this footage on the BBC website the rest of the band, like Alex, have grown their hair since the last time we've seen them. Oddly up close you can see that it's styled with lots of little flicky bits to make it look just the right amount of messy.

In what seems like a few seconds the band rocket through a 10-song set, ending with one of my songs of the decade '505' (from the album Favourite Worst Nightmare) and pretty much every hair on my body stands on end. The preceding set previews the body of the new album (bar the opening track, which comes from their debut LP but doesn't sound out of place with the new stuff), with that slightly darker rock thud and Josh Homme-signature vocal gloom making for something that ricochets through you in the tribal way only rock music seems to.

With its Beatlesie-indie-shaggier-pop, 'Cornerstone' still stands out for me, a little like the only unbroken finger on a smashed up hand but live it has a different, more glowing oomph about it.

Watching Matt Helders (in his chavtastic Nike top, silver chain and jogging bottoms) up so close is a sight to behold, as he double rolls and shows off all sorts of drumming genius. In fact, the most impressive thing about seeing the band in such a small space - beyond the impact of the intimacy of seeing of the biggest bands in the world at the top of the game in a tiny room - is how they're all virtuosos in their own right, as so much of the focus seems to be on Alex and his lyrics. It shouldn't be impressive but in age of so many have-a-go indie-bands with a punk aesthetic and electro-ladies with co-writers, it's the songwriting and their ability to play which has made them the massive band they are today. Watching it up close it was a bit of a masterclass - it's amazing how much space there is in their songs and how every sound is so meticulously there for the sake of the melody and impact.

Anyway, enough of my smug gibbering, here's what they played:

You can watch some video footage on the BBC website and listen back to entire set and an interview with the band on Zane's show via the iPlayer until Monday.

Humbug is released on Monday and the band play Reading & Leeds next weekend.