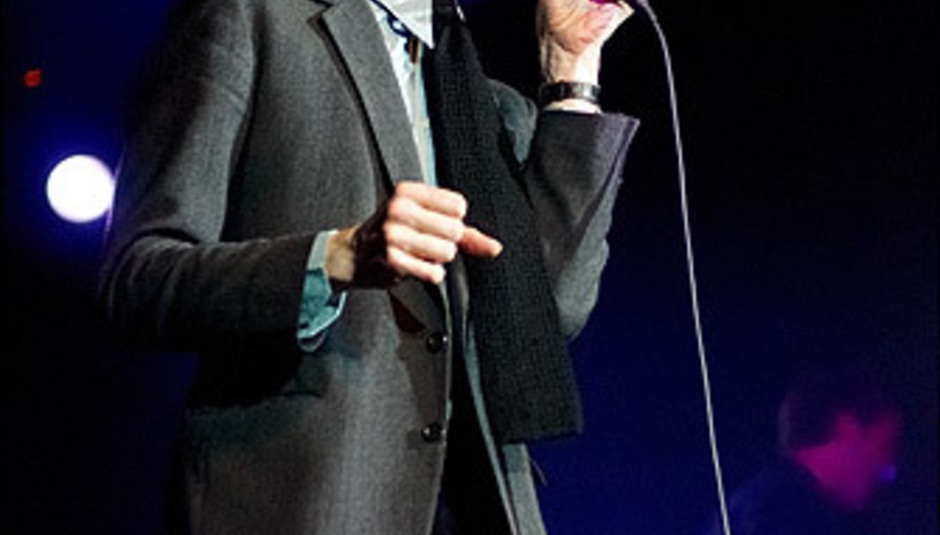 The ex-Pulp singer has announced his new (but still untitled) second album will be released on May 18th. In a slightly surprising turn of events, we understand that it was produced by Steve Albini. Why surprising? Well, we just can't imagine them getting on all that well. After all, Cocker's a nice, bookish middle-aged man and Albini... well, he always seems so angry. And intense. Still, we're awaiting the fruits of their joint labour with interest.

Looking forward to the Dananananaykroyd record? You should be, 'tis a corker. To whet the appetite, the band have made their first proper video for forthcoming single 'Black Wax' (out March 23rd) available for your viewing pleasure. Said LP, Hey Everyone!, is out on April 6th and to celebrate the release, there's a super-massive tour which includes a return to our Sheffield DiScover Club on April 1st. If it's anywhere near as good as last time, it's going to be a belter. This is also our first birthday event, another reason why you should be there.

Dance To The Radio

The Leeds label have announced the first in a series of four 12" compilations to celebrate their 50th release (the Grammatics album, DiS review coming soon). It's released on May 4th and features tracks from Bear Hands, Broadcast Society, Pulled Apart By Horses and Wonderswan. Get hold of a copy - there's only 500, so move quickly - from DanceToTheRadio.com.

Devo are brilliant. Simple as. And they're to play 1978's Q: Are We Not Men? A: We Are Devo? in full at London's Kentish Town Forum on May 6th, preceding their scheduled greatest hits set at ATP two days later. Attendance at one of these, at least, is highly recommended, if not compulsory.

Eeeee! A new Eels album has been announced, Mark Everett's first in four years. Hombre Lobo is set for a June 2nd release courtesy of Vagrant and comprises 12 songs recorded in E's LA studio. In the meantime, if you're a relative latecomer to the genius that is Eels, last year's Best Of compilation Essential Eels is one of the best collections of contemporary music you can lay your ears on, so go get it. And if someone could lend us his book, that would be much appreciated.

'Is this news?' I hear you cry... probably not, but it's pretty funny when indie heroes lay into one another. Flaming Lips singer Wayne Coyne has slagged off Arcade Fire in an interview with Rolling Stone, branding them "pricks". Here's the full textual assult:

"I'm a fan of them on one level, but on another level I get really tired of their pompousness. We've played some shows with them and they really treat people like shit. Whenever I've been around them, I've found that they not only treated their crew like shit, they treated the audience like shit. They treated everybody in their vicinity like shit. They have good tunes, but they're pricks, so fuck 'em. Who do Arcade Fire think they are?"

"Wow. I can't believe I am actually writing to defend my band's 'real' personality. I can't imagine a reason why we would have been pompous towards The Flaming Lips, a band we have always loved, on that particular night, all those years ago. Unless I was way more jet-lagged than I remember, I hope I was less of a 'prick' than telling Rolling Stone that a bunch of people I don't know at all are really assholes"

We're not ones for a media circus, so here's the cold, hard facts: Michael Jackson (formerly of the Jackson Five, and relatively successful in his own right too) has announced he will play a ten-date 'Is This It' residency at London's 02 Arena from July 8th... his last dates in the capital, so he says. "This is it, these will be my last shows in London", he told the gathered pack of wolves... sorry, journalists at a press conference, of which you might have heard about elsewhere. Tickets will be priced at an overdraft-inducing £50-£75, and are on sale from 7am on March 13th.

Did you like the Chunk Of Change EP? Yeah, us too. Waiting for an album? Well, get some Manners on May 18th. Their debut full-length contains the following tracks:

Exciting news: not only does the new SFA album have a name (Dark Days/Light Years), but it'll also be getting an early digital release on March 16th. And there's more! Fans will be able to logon to the band's official website at 8pm that day and watch them playing it in its entirety. Here's what you'll hear:

It's unclear whether Franz's Nick McCarthy will be on hand that evening to deliver his rap - in German - on 'Inaugural Trams'. The CD release is scheduled for April 13th.

Details of another early digital release. The new Yeah Yeah Yeahs record, It's Blitz, will now be available online from March 9th, with the CD coming out on April 6th. The reason? It's leaked. "Why should some have and some have-not?" say the band. Indeed. We've heard it, it's dance-y. We'll leave you with the video for the first single...