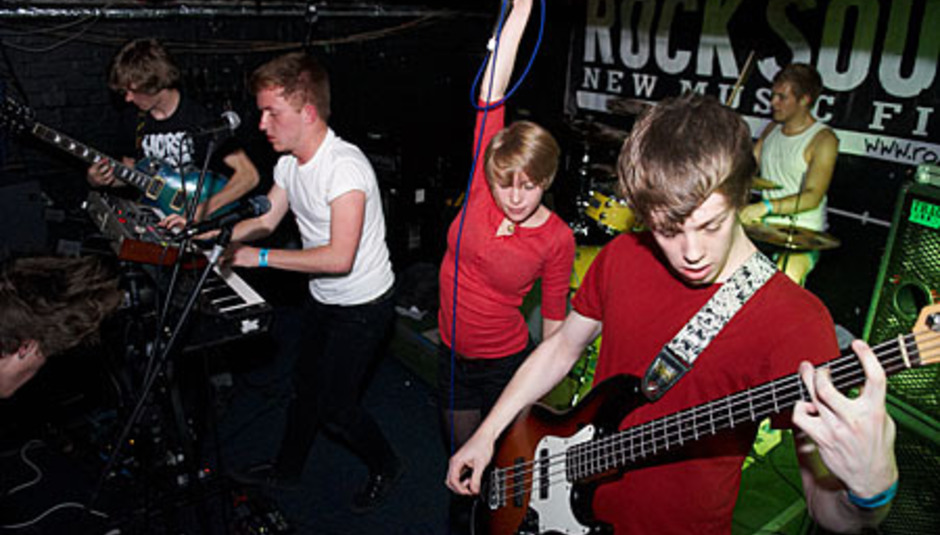 Before the break we were asking some of our favourite acts of 2008 what their albums of the year were but you can guess how busy some bands are, and a few folks took a little longer to get their top 5's to us.

So, in this final part Tilly and the Wall, Rolo Tomassi, Dananananaykroyd, Johnny Foreigner and Friendly Fires reveal what their top 5 albums of 2008...

Kianna from Tilly And The Wall

Of Montreal Skeletal Lamping
This record is a treat! It is like being on a ride in a perverted theme park strapped next to your dear friend who happens to be schizophrenic and an amazing singer. I love Of Montreal. I love Kevin Barnes and his alter ego Georgie Fruit and I love the show each of the "O Monts" puts on to go with this album.

Eric Copeland Hermaphrodite
I just like this music that's happening right now that's like, all of history squashed together. It's like noise but tribal somehow and industrial somehow and sprightly kind of and maybe it's bumping in an arcade while playing you're high on drugs. Also key: reeeeally good song names and album artwork.

SSION Fools Gold
These guys make art fucking FUN! They are a total package of performance, visual, audio and emotional art. This is a DANCE album so get ready to move. It's classic pop but overtly pervy and sneakily SO smart! They're classy and sexxy, CLEXY!

MGMT Oracular Spectacular
Duh. I feel like I don't even need to include this since everyone else in the world already did, but it's impossible not to! This album's production is incredibly well done and sounds brand new while being nostalgic at the same time. One of those almost impossible albums that blends "cool" with actually just really cool. This is one of like, three albums I had on repeat for months this year. My iTunes most played list is indicative of obsessive repeating... my friends think I'm nuts!

Blank Dogs On Two Sides
Tinny, mid-tempo, lo-fi, fantastic pop music! In my mind this is playing at full volume in a smoky apartment party while kids dance too fast to it, adding their own layer of shrieks cuz they're flipping out about how moving this shit is. It's GOOD. Go have a listen!

Deerhunter Microcastle
This is amongst the last few records I got hold of this year but immediately one of my favorites. I liked the last album but Microcastle is much more direct without compromising any of the interesting nature to their sound. 'Nothing Ever Happened' is amongst my songs of the year too.

M83 Saturdays=Youth
A huge favourite and an amazing progression in Anthony Gonzalez' material. I was surprised with the new direction but as a whole I think it's his most complete work and succeeds in evoking the whole 80's vibe he intended to capture. Perfect synth pop!

Why? Alopecia
I was recommended this when we toured earlier this year and after picking this up it was all I listened to solidly for a good two weeks. The way they arrange their music blows my mind and live it was phenomenal.

These New Puritans Beat Pyramid
I rarely buy records without having heard the band in advance but there was something that drew me to TNP. I'm still not too sure what it is but Beat Pyramid is great from start to finish. I like how dark and ambiguous the general sound of the band is and the flow of the tracks is very cohesive.

Los Campesinos! Hold On Now Youngster...
Whilst I think they got their sound better on We Are Beautiful... as a collection of songs this is my favorite of the two Los Camps records this year. Lyrically, it's something I can relate to which I find pretty rare with a lot of music. It's also an album that I associate with happy times during this year. Their set at Leeds Fest '08 was the best thing I saw all weekend too!

Venetian Snares Detrimentalist
Calum: This guy just slays me. His bazillionth record in 8 years, in about as many genres; this time, old-school rave samples collide with razor-sharp breakbeats to form a SPHERE OF EXCELLENCE!

Mr OIZO Lamb's Anger
John: I've been following Mr OIZO for a few years and its great to have a full length from him again, this one is made up mostly of glitched up disco, rave stabs and bad slap bass and saxophone keyboards.

Los Campesinos! We are Beautiful, We Are Doomed
Duncan: Whether it's an EP or an album isn't important, they're the most exciting band I've heard in decades. It's enough to make me feel stupid and young again. An album which just gets better and better once you've learnt all the words to sing along.

Chad Vangaalen Soft Airplane
Paul: Pretty much everything this Calgarian does either makes me smile, cry, jump for joy or feel incredibly jealous. Soft Airplane is his third album and probably his best - equal parts electronic noise, Neil Young-pop and broken-down robot rock with at least 1000 references to death.

Women Women
David: This is my favourite album of the year. I can imagine people listening to this and thinking I'm mental, but, to me, it's the first thing I've come across this year that is made up of all my favourite things and evokes such a deep nostalgic feeling from within my trousers: Lo-fi, 90's indie rock, noise and 60's pop. When I saw them live a few weeks ago, they sounded even better, sort of like Ex Models covering The Zombies. Amazing.

Arthur Russell Love Is Overtaking Me
Laura: A collection of lovely pop and country-tinged folk songs from the vast archives of the late, great disco genius. Makes you wonder just how much more amazing stuff he did that hasn't seen the light of day yet.

Gang Gang Dance Saint Dymphna In a year that's been chockful of dull overrated shoegaze-influenced records, here's one that marries complete MBV bliss to about a billion other ideas, and comes off sounding like the worlds most amazing summer solstice.

Zomby Where Were U In '92?
A lot of dubstep is pretty awful. Endless wobbly basslines and predictable drops at a tedious head-nodding pace. Zomby's album of old skool pianos and 'Think' breaks (think Liquid's Sweet Harmony played through an echo chamber) is none of those things. Party album of 2008 no question.

Kanye West 808s and Heartbreak
Got to be 2008's most preposterous grand statement, even out-stupiding Chinese Democracy (which surely takes some doing). The bits that are good - ie. Paranoid, Love Lockdown, Robocop and tens of other discrete moments - are insanely good. The bits that are bad - Say You Will, - are horrid. Hip-hop power ballads have got to be the trend of 2009.

Hercules & Love Affair Hercules & Love Affair
Leading the disco/early house revival that's been bubbling away for 3 or 4 years firmly into the mainstream, but the sheer quality of the songs takes this all far beyond homage. Blind is perhaps the one song from any album on here I can see myself playing and dancing to long into my dotage, or at least until my hips/back/brains give out.

Sunset Cinema Club Homina Homina Homina
One of our favourite bands since ever, this is pretty much a greatest hits set and probably the most sung-along to CD in our van - huge choruses and ace clunky pop songs about sex and sweets and Birmingham. Probably the only band I'll ever like that "brings" any kind of "funk". only Redditch could breed this kind of songwriteygenius.

Fight Like Apes And the Mystery of the Golden Medallion
Second most sungalonginvan. The songs we already knew sound fatter and the songs we didn't are amaze. Not so much hooks that you grab onto as giant bouncy castles that invite you in. Only ruder. And she has like, thee most amazing girl voice everrr.

William Self in Fiction Why this didn't get more recognition I don't understand. It has (IMO) the same spellbinding grace as the 2nd Stapleton album, only faster and slightly drunk-skewed. And he has like, thee most amazing boy voice everrr!

Los Campesinos! We Are Beautiful...
I know this is dead predictable and I know we sound Just-Like-Them etc, but there's bits of this album, where the goosebumps on my goosebumps got goosebumps. It's like our lives, in music..

Death Cab for Cutie Narrow Stairs
My general theory on indie rock bands: every group starts out with a big spark that, if their career continues, gradually fades out as they get accustomed to their lives. It always shows in their songs. And then we played this album and I totally stopped with the stupid grandiose theories. Amaze.

A message from The Editor of DiS