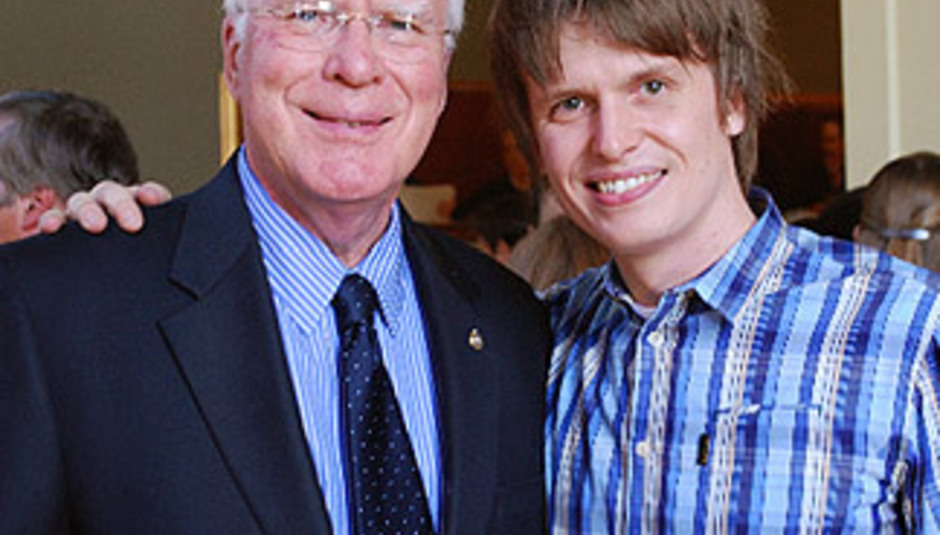 Death Cab for Cutie's Chris Walla has written a political blog for RollingStone.com.

Clearly not content with being in one of indie-rock's biggest bands, doing production work on records by Hot Hot Heat, The Decemberists, The Thermals and more, Chris Walla of Death Cab for Cutie has now gone and got himself a job as an online political reporter/blogger for America's most influential rock magazine Rolling Stone.

He's not exactly the new Hunter S.Thompson, though. The Death Cab guitarist is taking some time out from playing campaign shows to big up Obama, to report on the Democratic National Convention in Denver.

His blogs thus far have been a compelling mixture of behind-the-scenes insight and personal reaction. DiS particularly likes the fact he talks about his mum and then mouths off at Rupert Murdoch in the space of one paragraph:

"My mother and I have been texting back and forth this whole week, all about the convention; about what I see versus what CNN or MSNBC are covering, or C-Span, when she gets fed up with the punditry. It’s a funny thing — like, I’m wanting to know what’s going on in “the real world,” like what’s happening in the media, how our message from Denver is getting delivered (or hijacked, as is so often the case). And she, of course, wants to know what’s happening here, in “the real world.” But this isn’t the real world: We don’t control the message. That’s Rupert Murdoch’s job, unfortunately."

For more from where that came from and to follow the blog (which today will feature Barack Obama's address to the DNC), visit Death at the DNC on Rolling Stone's website.

DiScuss: surely there was a better headline begging to be written? Can you imagine the British equivalent of say, Bloc Party's Gordon Moakes, reporting from the Liberal Democrats party conference for Word magazine? The Democrats have to get back in this time around, surely?! Is there still a fine-line between being a journalist and a blogger?