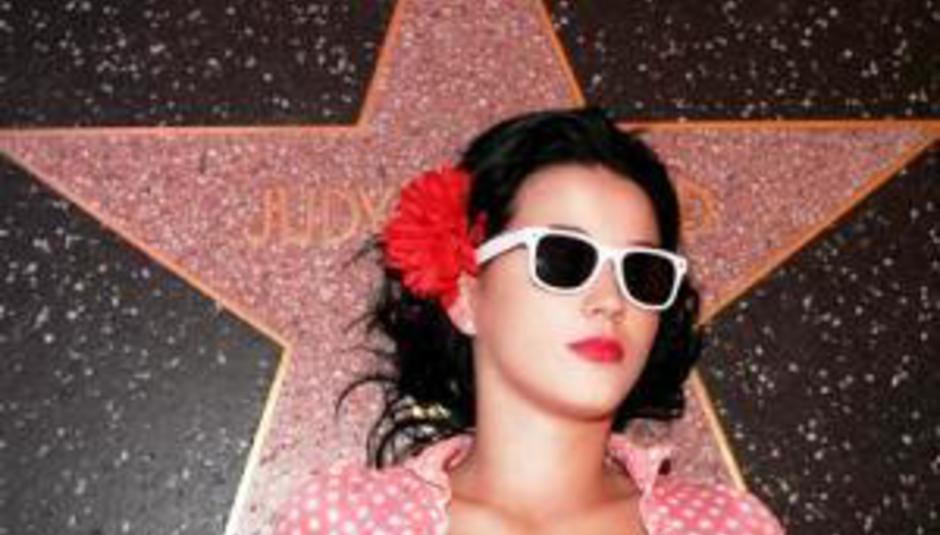 This week’s excuse of a news story to Google image search for pretty ladies is news that Lily Allen is in a bit of a strop with her EMI/Capitol label "mate" Katy Perry.

According to reports on popular-but-very-much-evil gossip ‘blog PerezHilton, a music industry 'insider' said, "Lily Allen is peeved at Capitol. She feels like they've shoved her aside to focus all their energies on their new girl of the moment, Katy Perry.".

They continue saying that Capitol have "replaced a photo of Lily Allen with one of Katy Perry" in its office main lobby.

However the reason we're writing this tabloid-y crap is to ask you all to stand up for our Lily. She's a popstar who, much-like the legendary status blokes in bands get for boozing at parties and even heralded as heroes for cutting their back open in the Cribs' case. Anyway, who the fuck gets away with saying stuff like "She's known these days more fore being a tragic trainwreck than a musician. She knows it too. That must hurt... Ha ha ha ha!!!!! Lily is starting to look like washed-up goods," as Perez has today written. I mean c'mon, having pink hair and being a little bit pished a few times is hardly out of sync with the modern world or the land of pop royalty in times gone by. Why does our media build them up to kick the crap out of them?

...and so thought Allen, who's offered up this retort to the spume-gargling gossip pig:

“I don't know why this has annoyed me so much. If I'm honest, it's probably because part of it is true these days I am more known for being a train wreck than a musician, and it does hurt. I've been working really hard on my new record; I don't think it sucks by the way. I haven't released a record for two years, so it's totally understandable that people don't write about my music anymore, however it's not fair to say that I'm washed up and it's not fair to make up these feuds between people. Not everyone's lives are fuelled by egos and jealousy, mine is certainly not.

“This is not meant in any way but I'd never heard of Katy Perry before I came here a few days ago, I didn't even know she was on Capitol, who by the way are not my label. I am signed to Regal Records in the UK and Capitol distributes my records here in America. I don't feel like I've been shoved aside for anyone, I haven't got a record out yet, so why would anyone be focusing their energies on me when there's nothing to work on!

“I have never been a ‘golden girl’ and I think I visited Capitols office in New York once, about a year a half ago. I very much doubt they had a picture of me in their lobby. The point I'm trying to make is these stories are just not true. If the word reportedly exists in a story it means that it's pretty much a lie, it means they can't prove what they're writing and their just covering their backs. Perez doesn't even do this he just writes things that aren't true with no shame about it, and it's sad.

“I read these posts on his website about anti–bullying campaigns and all these good causes, and while I used to enjoy reading his site it seems to me that recently he has become what he hates so much, a bully. He bullies young, successful females; people usually bully people they're jealous of so I'll let you come to your own conclusion on that one.”

"In her blog rant from earlier today, Lily Allen spread a bunch of lies, most of which are easily debunked.

"Claims the British trainwreck, "And this is not meant in any way [to be mean] but I'd never heard of Katy Perry before I came here [to L.A.] a few days ago, I didn't even know she was on Capitol." Uhmm, liar!"

DrownedinSound wishes to pause at this point out just how much those last two words makes us want to bury all the fists of the world - those of bears and brutes, of statues and tigers - into this man's horrid little pug face.

"Sources close to both Lily and Katy tell us that Allen "definitely knows" Perry. In fact, they've even met! Above is a lovely picture of Katy and Lily together.

"Oh, and the folks at Capitol also tell us that Lily is lying. She says, "I think I visited Capitols office in New York once, about a year a half ago.

"Maybe all the pAArtying is affecting her brain? Cuz our peeps at Capitol tell us she's been there MORE than once in the past year and a half. Why lie, Lily? Why lie?????"

But wasn't...? Yeah, we're sure Allen has been having difficulty getting into the US recently.

"I am not a liar Pee pEe, how can I possibly have been to Capitols office in the last year when my visa to get into the states was only granted three weeks ago, there is no Capitol office in LA as far as I know and I certainly haven't been to New York in the past few days , you should know , you've documented my every move since I got here?

"And many people ask to have their photos taken with me , I don't keep a record of peoples names . You wouldn't understand that though , you can probably remember the names and faces of all seven fans that turned up to your clothing line signing the other day."

When it comes to flavour of the moments, we've heard the Katy Perry record and it's crap. Exhibit A...

DiScuss: who do you prefer? Shouldn't people like Perez by reprimanded more often for writing such tripe?