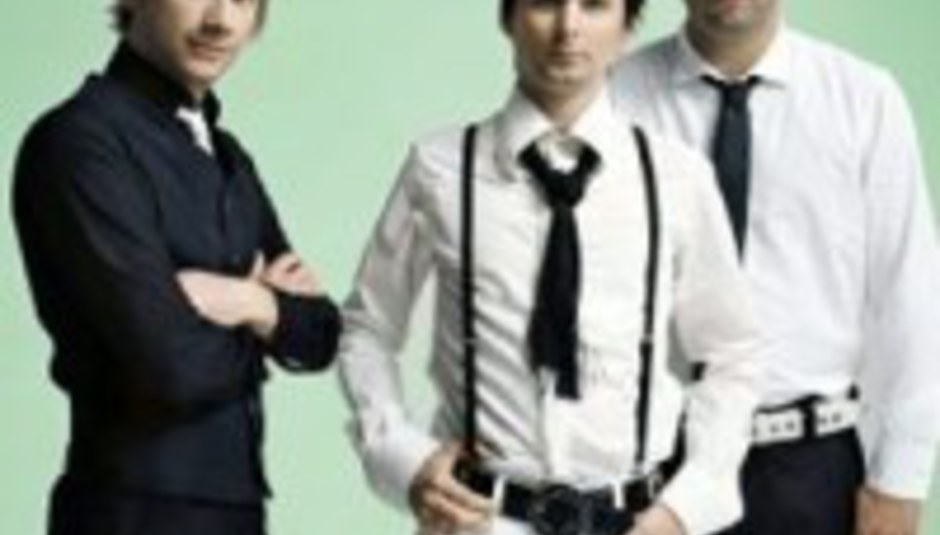 There's nothing like a night out at the cinema. Unless of course, you're heading over to the local mega film complex to see a gig. Weird, non? Still an invitation to see a screening of the new Muse DVD - recorded at their mammoth Wembley Stadium shows last summer - felt rather appropriate. If anyone can recreate a Jerry Bruckheimer blockbuster with simply guitars, bass, drums and a shitload of pyrotechnics, it'd be Muse, surely? HD, DVD, surround sound. DrownedinSound heads intrepidly to Leicester Square in London to find out...

1 min: band emerge from depths below stage to ticker tape and The Imperial March; Matt Bellamy in red suit, Dominic Howard in green trousers. Bellamy tests the speakers, wapping out a couple of nonsense chords. They’re pretty loud. The crowd are all holding cameras. This immediately pitches them, to my mind, somewhere between idiot tourists and idiots. There are huge satellite dishes onstage. Not sure why.

3 min: first cumface of the evening during ‘Knights of Cydonia’, courtesy of Chris Wolstenholme.

5 min: first Bellamy wail on surround sound. Is impressive in a basic sense, if slightly unnecessary.

6 min: crowd are all between 4 and 6.2 on the Pitchfork/Vice magazine misogyny scale, white and middle class.

16 min: film seems to hang, to a few isolated jeers from the assortment of hacks and real fans. Kicks back in. Anticlimax.

19 min: surround-sound makes it difficult to detect where screaming is coming from. If anyone sings in the cinema, I'm leaving.

25 min: Matt Bellamy as MySpace guitaretab.com axe-hero? There's a moment of thought and humbleness when you realize three people called Matt, Chris and Dom have reached the very top of their profession. 27 min: still not sure what satellite dishes are for.

28 min: first spotty teen throwing ver horns. Matt appears to have a MacBook track pad on his guitar. Maybe to help find those guitar tabs in moments of need.

29 min: first handclaps of the night with ‘Butterflies and Hurricanes’.

31 min: Bellamy takes to the piano.

32 min: still at piano. It’s like the Lion King all over again. As performed solely by Vin Diesel.

33 min: actually quite good at piano. Like a safer Mike Garson.

34 min: huge plumes of smoke. Awaiting killer riff as set flattens. Every song seems to have involved same mewl and rock t’ing. You remember that the band hired out Lithuania as 'pre production' for these shows, and can't help but feel slight impressed. That the GDP equivilant to say, Zaire, was spent on checking fireworks went off on time.

42 min: struggling to keep eyes open, despite barrage of noise. Feel guilty for taking seat a fan could’ve used. Then there's another song thats about nuclear war or something.

46 min: guilt dissipates with start of ‘Feelin’ Good’. Still mewling and wailing, though at least it’s someone else’s song, I guess.

62 min: Kiss blown. Devil horns. Droid returns, looking like it was stolen from Robot Wars, for a second guitar. Back to the piano for ‘Newborn’.

70 min: shot from blimp shows stage made to look like alien’s head from above. Cunning.

77 min: oh no wait, the mob’s back out. Acoustic guitar. “This one’s for the unsung heroes”. Mewling over acoustic guitar, xylophone.

82 min: Bellamy struck by pants. Possibly same pair as at 65 min. Vocalist goes seamlessly from kneeslide into a bound down along the stage gangplank before widdling guitar to a close and ditching it in the crowd. Last riff; mewls.

85 min: how much longer must this go on for? Ears, eyes, senses ailing. Bellamy mewling.

90 min: sinus-shattering scream. The inevitable fireworks. Flames. Think it may be over.

92 min: it’s over. Leave before credits start rolling, head-reeling, feeling as drained as you normally would after a stadium show but without being able to claim the all-important "I was there" points.