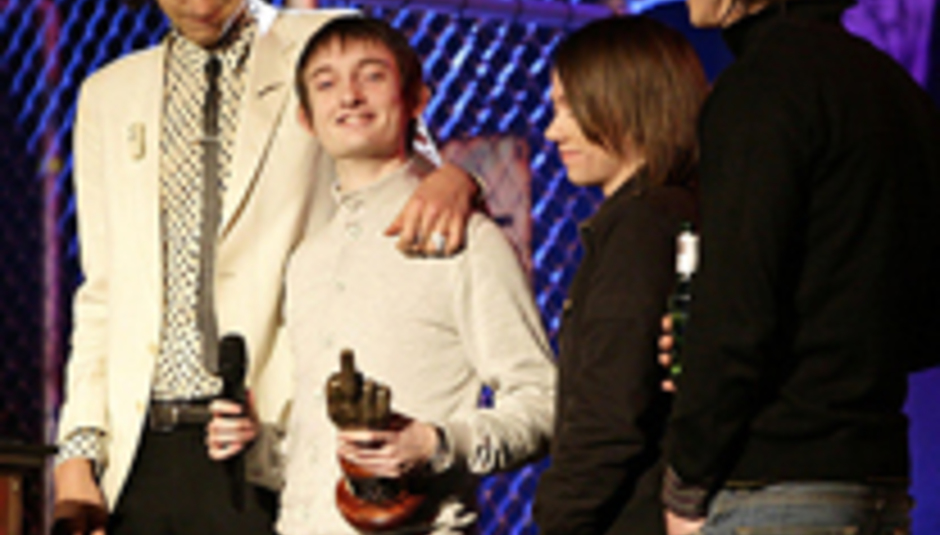 For those of you not following the grand ceremony on TV, here’s a round-up of all the winners from last night’s NME Awards Show.

Myths of the Near Future followed up its good work at the Mercury Prize by bringing home ‘best album’ for Klaxons while Pete Doherty was honoured with the award for ‘hero of the year’.

The unfortunates? The Hoosiers, Britney Spears and George W Bush for worst band, worst album and villain of the year respectively; the latter, we’re sure, taking on board the NME readers’ scorn and determining to buck up his ideas in the future.

Obviously this is a bit like shooting blind, unlucky fish in a barrel, but just a few quick grievances – the first regarding Arctic Monkeys ‘best video’ award. No gripes here, a fine band with a video directed by Roman Coppola (click). But the accompanying NME news story suggests the award was given to a video that “features a gangland war between criminals and clowns in full costume, along with childhood snaps of the band themselves.” That’ll be the more spectacular video for ‘Fluorescent Adolescent’ then, yeah?

Other concerns of DrownedinSound’s come with The Wombats’ win (we’ve obviously be filling the wrong dancefloors), and the categories of best venue and the John Peel award for musical innovation, both of which have taken significant steps up this year – Wembley Stadum dislodging Brixton Academy from its title of the former while Radiohead deservedly joining the ranks of pioneering acts The Others and Enter Shikari.

Us? Yeah, we're just bitter we didn't get nominated again this year.