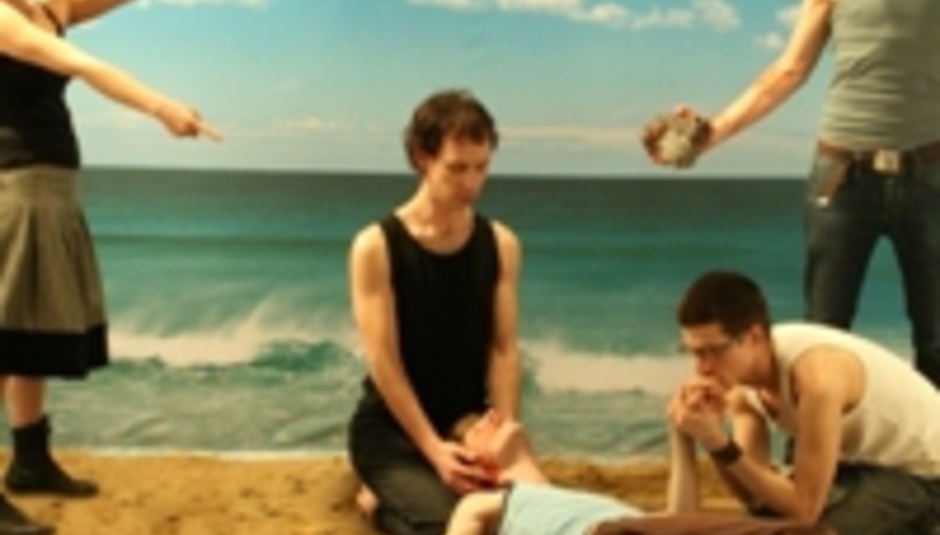 - - -
‘PARTY’
H: ‘Party’ was a nightmare to arrange. The song used to have a completely different verse that is nowhere to be heard. One of the singing melodies was initially the bassline. When we started out recording I could have never guessed what would happen.
A: The singing part, that feels like somebody is in a psychiatric hospital, came last. It finally gave the right dimension to the main line, "Is there a party can I come?" and match the dramatic guitars and add some despair and gravity to it. Suddenly it became this scary song about somebody being so lonely he’s going insane.
- - -
Video: ‘Party’

‘FREEJAZZ’
A: The first version of this song was made very fast, during Christmas holidays in 2005 or something... We were at Henrik´s summer house recording before we were going to play in Denmark a few days after. Between the kitchen and the hall there was a step, kind of wide, like a landing space, we had arranged like a small ‘stage’ with fancy Christmas lights glowing all around. At the time I was travelling through Denmark to come to Sweden and, together with my fantasy of hip-hop singing, this noise experience of foreign language one morning gave this crazy nonsense talk in the verse. Now it’s like some kind of preacher from space, that has a message to spread and tells it in a convinced way but nobody can understand it.
H: This is probably the fourth version we recorded of this song. If people heard how similar the different versions are they would be convinced that we are nuts. It’s like we love it so much and we want to make it perfect, but we think we are really close so we don’t want to change it too much. It has been released once before as a single we made with James Ford. The song was based around Fredrik’s guitars and then Martin made the bass and we all became amazed. We didn’t have any singing for the chorus so we made a competition where everyone made some and then we decided the best. This method is recommended both for its fruitfulness and for the fun it puts into songwriting. And as a team-building exercise.

‘HEAVEN’
A: The first version of it, that Henrik recorded on my old Apple G3 in Paris, is lost forever. I keep this dream memory of it, like the most beautiful acoustic stuff ever. I remember a drawing I made of him around those times; it was on dark blue paper, a huge wave made of blonde stars and that looked like his hair cut, too.

‘SMOKE IN THE DESERT, EATING THE SAND, HIDE IN THE GRASS’
H: This song was originally a minute and ten seconds long. Now it’s 3:23. How did that happen? From the beginning we had this problem that when we played the song live no-one understood when it was over. People were saying, "Oh, that was a great song, but it kind of ended before it even started". It was fun, but at the same time a shame. So we made it longer. We made new parts, new singing and stuff.
F: This song was around for a long, long time. It was called ‘Regheg’, a bastardisation of reggae. It song really shows the brilliance of our former bass player Maja. The bassline is fantastic, and he/she also made the guitar riff in the chorus. Filip shines on the drums as well. I'm very proud with how this song came out finally.

‘LIFE ON THE BEACH’
H: When looking for how to sing for this song Per (our producer) was suggesting that I should pretend that I was Ignatius J Reilly out of the book A Confederacy Of Dunces. This is very crazy to pretend when you’re standing with a microphone in your hand and headphones on your head.

‘BOAT’
A: From the beginning, the song had only those four chords, but it was already nice. I wanted it to last hours, like if you were lost at sea. The waves are moving your body regularly and sometimes you can see the sky and sometimes you don’t, and you’re dying slowly, there’s nothing to do apart from floating, but it feels good. Then there was this story with my parents where my father left for two weeks on a boat and I called my mother and it was a total mess at home, and finally when I brought it in, it fit the song and the-dying-at-sea feeling pretty well, because I think that when I’ll die I’ll think about my parents. People who had almost died say that when you’re really scared – like, for example, firemen say that when you’re really scared because you’re gonna die burnt in the fire – you think about your mother. I guess it comes back to the basics and you’re like, "Mummy! Help!"

‘PUT ON HOLD’
H: Brille (the band’s UK label) asked us if we could make some music for their answering machine so we made this. I don’t know if they still use it, they are always answering their phone.
A: The bassline sounds like a old motorboat or something.
F: Henrik had been experimenting with recording bits of an analogue synth, playing random notes, then pasting together these fantastic lines from that. So we made this very simple chord arrangement, and then we just stepped it up in the outro. Again the drumming is so good. The singing melody is also semi-synthetically created, by typing in the words of the song in a voice plug-in, in a sequencer program. You could set it to different harmonies and depending on the syllables it would pick a ‘random’ note in the scale, and then I'd cut out the good parts that became the melody. The middle part with all the countries calling, holding up the lines, I always find hilarious.

‘I’D LIKE 2 C U’
A: I think The Ramones should have sung that song. It has exactly the silly poppy choruses and hard guitars they mastered mixing together.
H: This one I think it’s likely that we will record again. I’m not very happy with the way it turned out. The instrumental part is awesome though, and the end is pretty good, but there is no punch in it. Maybe it’s about sex tourism.

‘I’M IN LOVE AND I DON’T CARE WHO KNOW IT’
F: Henrik came up with it real fast, and the demo was made in no time while we were at the farm. I remember working on the choir arrangement for days in the dark basement of the studio. Then Henrik promptly removed most of it for the mix, ha ha. A lot of our songs are really about love in way, I'd say, but you can't have more than one as explicit as this one on a record and expect to get away with it.
H: We will never play this song live because Audrey hates it. It was born after watching the movie Elf, there is this scene where he comes into daddy’s office and tells everyone that he is in love with Zooey Deschanel.
A: Naan… you can play it live if you want… you can play it live and then I'll go smoke a cigarette for a while.

‘WHAT’S THE DEAL’
A: I’ts a hard way of life. What’s the deal on the field. At the end you can hear I sing like an opera singer. We tried an effect called ‘autotune’ once and it was so funny we couldn’t resist keeping it in. The effect kind of ‘brings’ you to the tune every time you cannot reach it. It’s a total heresy for real singers of course, but for us who have no ambition in being real singers it’s okay to use it. We survive the shame without problems.

‘SEAWISE’
A: Again a song about tough life at sea. Maybe life can be seen as crossing a big unknown space filled with water – you don’t see where you’re going, but you hope for something; sometimes there are storms, and sometimes you feel like you’re gonna give up, and then one day wind is coming, sun is glowing. And then it starts again, the not knowing, the adventure, the pain and the joy. Maya our ex-bass player wrote that song at the farm, and from the first I heard it I really wanted to sing it, we had fight with Henrik because he wanted to sing it too. The music is really advanced on this song, complex stuff going on.

Here Comes The Wind is released via Brille on February 18 and will be reviewed on DiS next week. Check the band out on MySpace HERE.