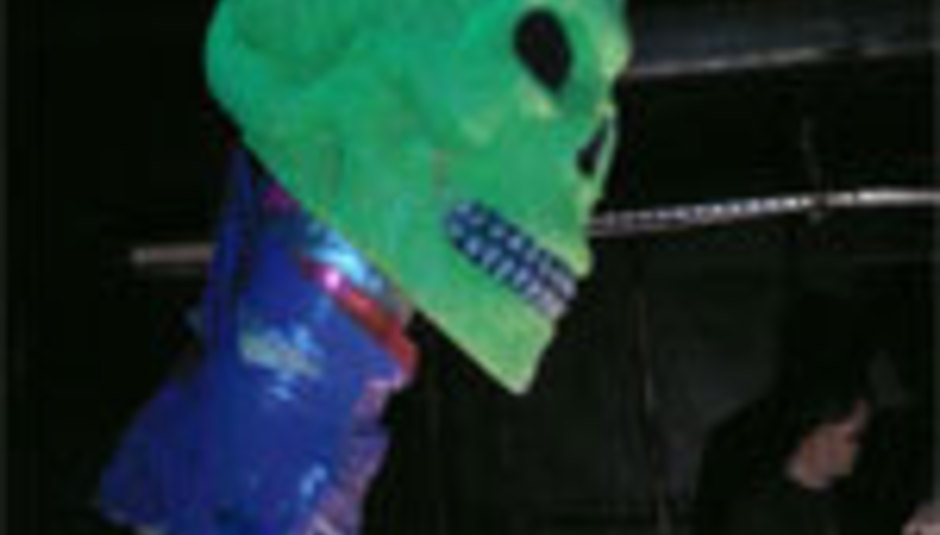 Some idiot cad has ripped off Dan Deacon's green skull.

The heinous theft was revealed in a Myspace 'blog posted tonight by Baltimore's Wham City bulwark.

Anyone witness to one of Mr Deacon's air bursting live shows will know that the skull is an integral part. So, if you were at that show - hello Chicago - and know who's bag/house/safe that skull is locked away lonely in, read the emotional plea below and do the right thing.

"sadly last night the trippy green skully, my old friend and touring partner for over two years, was stolen last night after my set at the av-erie gallery in chicago.

"this skull is a major part of my set, a vital instrument in my performance. i leave for a month long tour of sold out shows on wednesday and i dont know what i will do without it.

" this is the skull

"it was taken off of the strobe light, so its a hollow plastic skull made up of tiny little green beads melted into the shape of a trippy green skull.

"if anyone has any information about this that leads to the skulls safe return i will send you a package of wondrous treats and guest list you for a year to all shows i play in whatever city you want.

"if you stole the skull or know who stole the skull and are afraid to contact me because you/they are a thief coward you can contact sam hunt at sam@windishagency.com and he will facilitate its safe return. again, my next tour begins in 3 days.