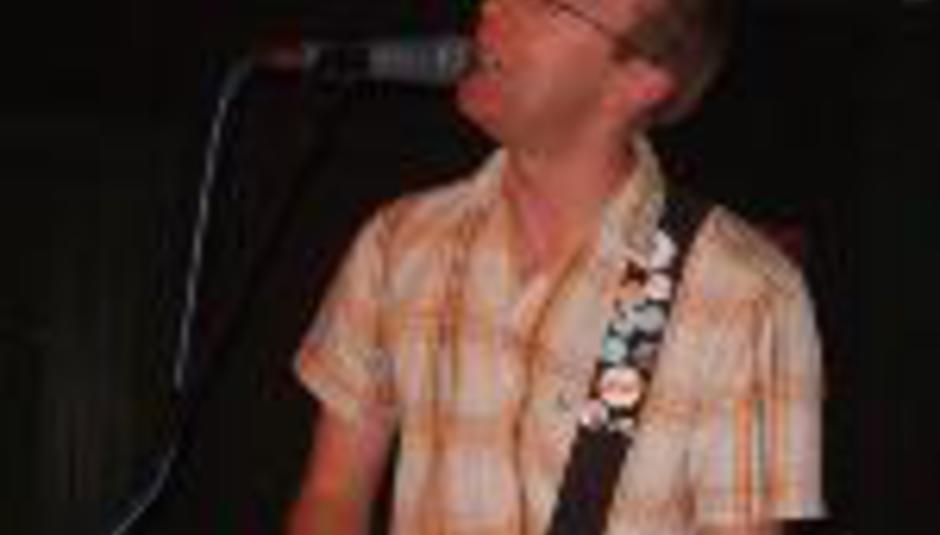 Former Art Brut-er Chris Chinchilla is to up sticks pretty dang soon to move down south. Waaay down south.

The singing guitarist man - that's him, pictured, singing and guitaring - is relocating to Australia, meaning that there are only three opportunities for Londoners to catch him live in their hometown. And home country.

Says Chris (MySpace) in an e-mail to DiS HQ:

I've been starting at the bottom again, working this new band and a solo show that goes anywhere, does anything... I've played all over the world in the past year. That culminated in a tour of Australia late last year, where I was refreshed by their attitude - it's not about who you are or what you look like; if they enjoy the music, you're given a chance. So I'm embracing that and moving out there.

I've been getting back into music with a point: I'm not naive enough to think that music will change the world, but I see no harm in trying to present reality and let people make up their own mind. I've been drawing influence recently from artists such as Billy Bragg, Frank Turner and a few old favourites such as The Specials and The Jam.

But I'm not about depressing or preaching to people; I try to write songs that are accessible. If you don't want to pick up on the message, you don't have to, you can still have fun.

Ignore the demos that are about at the moment as I've not had the money to do proper recordings yet. Someone is currently mixing some better quality tracks, but they're doing it for free, so it's taking them a while.

The live shows have been phenomenal. When we turn up people rarely know who we are, (but) we've been lucky to play some good shows with good crowds and they are loving it. The word is spreading, and we've received some amazing feedback from crowds and every promoter has invited us back.

In a way it's a shame that at this point I'm leaving the country, but several other things are annoying me about the UK and it feels the right thing to do.

DiS obviously wishes Chris all the best in Australia, and recommends you catch him at one of those three shows before he sets sail for foreign shores. Or takes a plane, like a sensible person. Speaking of which, we're got Sensible Soccer upstairs. Time for a match, methinks...