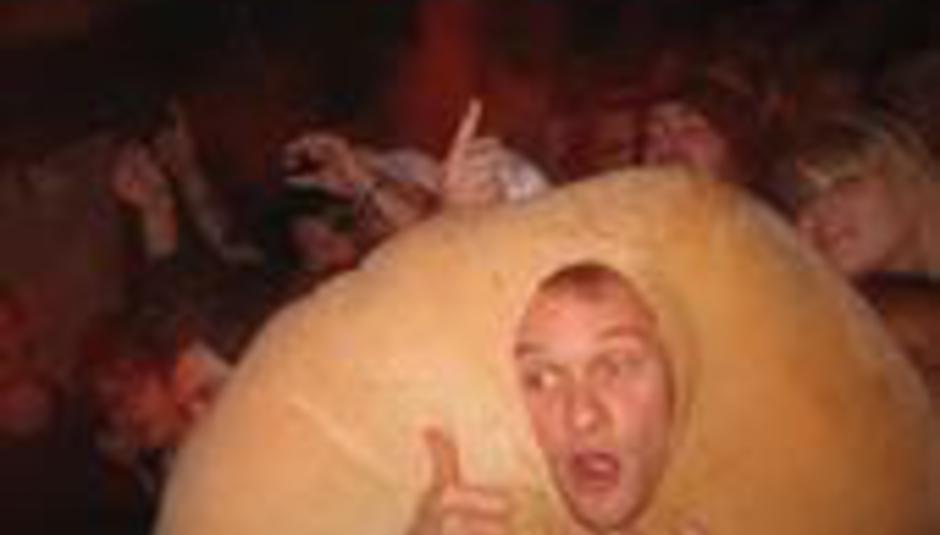 Lady Sovereign continued her tour of the US on Monday by spitting at and fighting with a man dressed as a giant jelly donut.

San Francisco's Mezzanine venue was the site for one of the most absurd news stories DiS has ever had the pleasure of reporting.

The donut alleges that the grimy madam first covered him in Vodka Red Bull, spat within inches of his face and then had him thrown outside into an alleyway. What's more, he's got evidence: find pictures of the incident here and a video clip here.

The conflict came after this matey somehow raised $10,000 to take Sov on a date, which apparently was used to ply her with a "yacht, champagne, blunts… the whole dealy". After the date things turned sour, however, and the rapper burnt her suitor in an interview with Spin magazine.

Said the wee rapper:
"I just didn't enjoy it... I don't even know this guy. We had this massive yacht and all he brought on it was me, my manager, one friend, a photographer, and someone else... I wanted to bring my people and just party. He e-mailed my manager because he wasn't very pleased with things I have been saying about him."

So, you've just spent $10,000 of the public's money on some Hackney bint, and she has the gall to come out and slate you in a magazine with readers the world over? What do you do? Get one of your boys to dress as a giant donut and challenge her to a beef-stopping rap battle onstage, obviously.

But Sov ignored the crowd's attempts to get her to indulge in a spot of verbal sparring with sustained chants of "BATTLE JELLY DONUT!", before doing the aforementioned bad things to the 6ft snack.