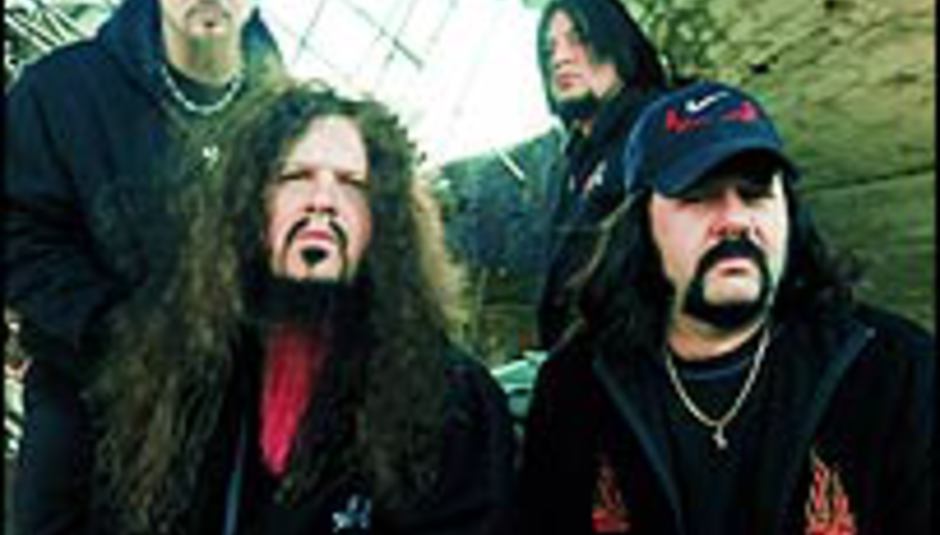 by Mike Diver December 9th, 2004
Dimebag Darrell, founding guitarist of the legendary Pantera and later of Damageplan (pictured), was shot dead at a concert last night in Ohio.

The incident happened in Columbus, where Damageplan were performing at the Alrosa VIllage nightclub. A gun-man took to the stage and opened fire during the band's opening song. At least four people were dead and two injured before security tackled the man. He was eventually killed himself.

It is believed that members of the crowd thought that the gun-man was part of the act, and therefore action was delayed. Dimebag was born Darrell Lance Abbott in Dallas in 1966.

'Columbus police Sgt. Brent Mull said the shooter appeared to be targeting the band members. After opening fire on the stage, the gunman turned on the crowd. At that point, an officer shot the man dead, Mull said. Police said there could have been many more fatalities had the officer not killed the gunman.'

The four people (this seems now to be the official figure) killed at the gig have now been named. They are :-

The following is from the Seattle Times:

The story pieced together from witnesses, passersby and police suggests that Damageplan had just begun its first set Wednesday night when Gale went to the stage, followed closely by a bouncer and another club employee.

Gale went to Abbott, started yelling and fired quickly. Abbott folded toward Gale, and a bouncer tried to pull the assailant off him as Gale continued shooting. Gale shot the bouncer and apparently fired into the crowd.

When police received the call at 10:18 p.m., Officer James Niggemeyer was patrolling the industrial, middle-class neighborhood where the Alrosa was a fixture. He raced to the club's back door. When he reached the stage, he saw Gale holding someone in a choke hold. Niggemeyer, 31, shot Gale dead.

When the shooting started, as many as 500 fans streamed toward the exits, but police soon stopped them and took statements from 250 witnesses on buses brought in for the purpose.

Two others were hospitalized. The nature of their injuries was not disclosed.

In brief overview, the most accurate description of what actually happened that night has been given by 2 of the stage crew working at the venue and can be read in full here. Former Pantera band mate Phil Anselmo has now spoken out and you can see a video of his statement here.