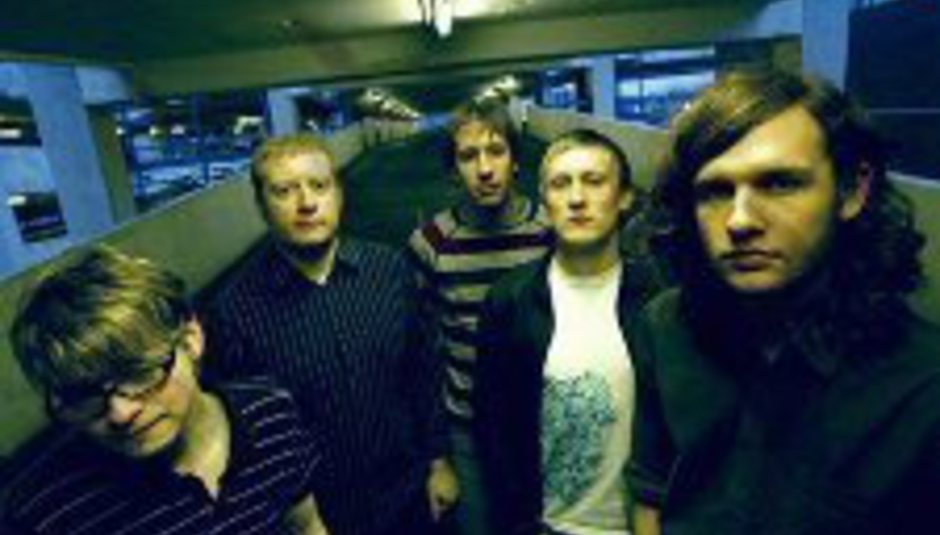 It’s unfortunate that at the beginning of this piece I cannot set a scene. I’d like to tell you that the interview I conducted with Lewis Roden, guitarist of Coventry-based five-piece Sika Redem (Luke McCusker, Stein Fletcher, Tommy J and Ian Lee make up the numbers), was recorded onto a Dictaphone while sitting outside of a disused observatory, or on the roof of some star-reaching skyscraper. If I did I’d be lying, as instead of taking place in a location befitting such an otherworldly, yet strangely grounded band, questions and answers were merely traded back and forth on an internet messaging service.

In late May 2006 Sika Redem released their long-overdue debut album Entheogen, to a bank of hushed praise. The nine-track album received 9/10 or 4/5 reviews in several magazines and webzines, but the band have had a conspicuously slight amount of press coverage. Not that this bothers the band - for them it's strictly music, something that’s apparent from the album itself, which Lewis is keen to discuss at length.

---
"There isn’t really a set songwriting process. Riffs and ideas come from each of us, then we'll them elaborate on and work them into other riffs and pieces"
---

"On Entheogen some of the songs were over a year old - ‘Zenith’, ‘Proud sons…’ and ‘Protagonist’ were written nearly straight after our first EP, No Gods No Masters, was released. Those songs had a stricter design, and due to having no worries about deadlines were allowed time to develop.

"There isn’t really a set songwriting process - riffs and ideas come from each of us, then we'll them elaborate on and work them into other riffs and pieces, sometimes bits from jams, sections of things. The songs ‘Mr Hunk’ and ‘Sekret Redem’ in particular are more jam based, those songs lend themselves to a bit more freedom and improvisation. We do jam a lot, we'd like to get more of it into our songs, but we seem to forget, or get bored quite quickly and enjoy working things out and messing about with them.” As anyone who has heard Entheogen (pictured left) will know, this is more than evident. While their first EP, a three-track slab of intense and oceanic post-metal, seemed to lack ingenuity despite its high quality, their debut album is a great step forward - a step into the unknown. Earlier tracks were built on the traditional, and highly predictable quiet-LOUD-quiet structure on Entheogen there is a sense chaos, in volume, tempo and any other element you care to mention.

Take second track ‘The October Bird Of Death’. Crashing in with falsetto wails and cymbal hits, it soon burns through screams and complex, punishing riffs before settling into a clean, hushed melody - all in just over a minute. With such ever-changing music, it's hard to pin down a clear inspiration. Lewis quotes Pink Floyd, The Murder Of Rosa Luxemburg, The Verve and Orchid among others, yet it's hard to find more than a couple of seconds that could be accredited to any band's influence.

So what is the band's opinion of the album? Obviously with such a dynamic change from their EP there must be a certain dissatisfaction with their earlier material, or a hyper-active refusal to retread waters - can a greater change be expected in the future?

"We are very proud to have gotten to make the record and have it released - it's the high water mark of what we've done so far. There's certainly no tracks that we wish weren’t in, and it's definitely a statement - a document of us at that very point.

"When we talk as a band, it's always about the next thing we're gonna get into. We always want to challenge ourselves. No direction is planned... I don’t know if that’s to our detriment, if it causes us to be unfocused, or not give time for certain aspects to breath or develop themselves. Maybe slowing down and refining ideas we have under our belts would be a good thing for us, but it seems that any time you consciously direct the music you end up fucking it up, or turning out something fake."

The band will begin their first tour since the release of Entheogen in September. Although full dates are unavailable, Lewis is keen to display his enthusiasm for taking to the live stage. I ask him where his preferred place is, on stage or in the recording studio.

"We would like to be in a position to do both, all the time. I can't wait for us to tour, as we ain’t played in ages and ages. The live playing - if anyone comes to see it - is awesome if there is a crowd who like it, and just hanging out with your mates in a new city is beautiful.

"Right now, playing live is the more important thing for us, although I love the creation of new stuff in practice. It's hard - if the vibe doesn’t happen live then it hurts, same as if the vibe when writing isn’t there it's disheartening, there is nothing you can do to bring it up, to make it happen."

If you like to be challenged by music, to follow it through after hitting the glass prism, then be sure to check out Sika Redem live and/or to purchase Entheogen. It may seem hard to swallow at first, but the sound they create is as enticing as it is thought-provoking, a pulsing ever-changing behemoth that takes in and chews up prog-rock, post-rock, metal and hardcore, producing something truly uncategorisable.

Check out Sika Redem for yourself at their MySpace page, here. Entheogen is available via Undergroove Records.