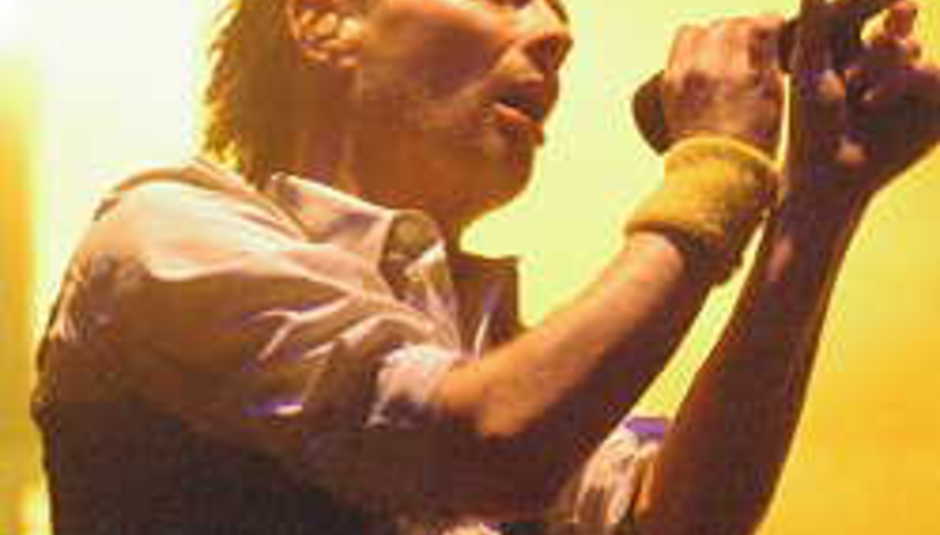 Mountains line the horizon and there are palm trees as far as the eye can see. The Coachella Valley Music and Arts Festival lies some 25 miles away from Palm Springs, in Indio, California. Its unforgiving desert terrain folds under the weight of cash; lush grass, and fountains, with a cinema tent and modern-art constructions littering the site. Oh, and every great band you could hope to see this year.

The Empire Polo Field is roughly the same size as Reading's. Both the Coachella (main) Stage and Outdoor Theatre (second stage) have backless frames that overlook the awesome scenery while three other tents house a fantastic array of DJs, dance acts and newer bands. The food and drinking areas are fenced off to prevent rubbish from carpeting the site and priced at typically British rates, the quality and variation far surpasses UK shit-in-a-tray.

It's barely afternoon, yet the temperature's already approaching 100 degrees. The music of Radiohead, Jeff Buckley and Nine Inch Nails is being blasted from the main stage from four classical string players known as the Section Quartet. It's a beautiful unconventional sight.

The first proper band of the weekend is The Sounds, who sound like a pub level Debbie Harry cover outfit. It's Swedish synth-driven indie that thinks it's a lot prettier than it is. Front woman Maj Irarsson is all hand claps and leather, but it becomes increasingly embarrassing as the crowd refuses to shake along.

Still, The Stills certainly know how to get things moving over on the Outdoor Theatre. Montreal's royal mopesters are always going to be onto a winner melding Kurt's self-loathing with The Smiths' stinging pop sentiments. Lyrically, it's all pretty dour, but 'Gender Bombs', like pretty much all the tracks from their excellent debut, Logic Will Break Your Heart, is striking and instant. We'd highlight every Joy Division bassline and every Radiohead guitar lick, but we're too busy dancing.

Stellastarr* are the prettiest band at Coachella and they sound it. Of course, it's all eighties thievery - The Cure versus Pixies versus U2 - but we love it. The dirty New York melodies filter perfectly through the stuffy Mojave Tent, and the likes of 'My Coco', the delicious standout from their self-title debut, are the perfect mid-afternoon stirrers.

…And You Will Know Us By The Trail Of Dead don't really suit open air stages. Especially in the kind of bakery now descending on the second stage. It does mute the chaos though, and though their riotous guitar destruction is Pear Harbour done by Fender, it's not the world-imploding warzone it could be under canvas. Shame.

Back on the Coachella Stage, The (International) Noise Conspiracy are as ridiculous and loud as ever, puncturing the air with their increasingly loved political-punk rhetoric. While the guitarists synchronise their stage jumping, Dennis Lyxzen shows off his formidable mic-hurling routines, over a dirty garage rock show somewhere over Thin Lizzy and The Hives' rusty rainbow. Crunchy.

Out of all the acts on today, Desert Sessions seem most at ease with the frightening heat. Queens Of The Stone Age's Josh Homme attacks his side-project with majestic drive and the resulting fourty-five minutes are an interesting, if slightly uneasy mix of dark, wiry riffs and divine rhythms. Joined by the likes of Brody Dalle (Distillers) and Tim Van Hammel (Millionaire), it's captivating stuff.

We couldn't give a toss about The Rapture, but they go down a lot better than Sparta (Coachella Stage), who remind us why we miss At The Drive-In so very much. Not as missed as the Pixies though, who make the first of many festival appearances to the kind of euphoric reception reserved for lunar landings.

And as the VIP areas swell over into the main field, Black Francis delivers a history lesson in alt.rock. He may be shiny, swollen and eyelinered to the point of looking like a Billy Corgan Spitting Image puppet, but musically he's lost nothing. Neither has his band. Everyone remembers every word as world of indie clubs and cider sprees comes rushing back.

Pixies' joyous dynamics charm Coachella like the nineties never started. From the sunburst 'Here Comes Your Man' to the brilliance of 'Velouria' it's the kind of mighty festival performance that see every other band on the bill bowing down on their knees. Even Johnny Greenwood's getting on down to 'Debaser'.

And after a bit of shaky start, Thom Yorke puts paid to any cancellation rumours with the kind of majestic performance we expect from Oxford's finest. Ending their world tour in style, it's a world a way from the stuttering rehearsal tour in Spain back in 2002 where they debuted much of Hail To The Thief.

As well as the now familiar newer tracks, 'Planet Telex' and of course 'Creep' are reprised for all the college rockers, and when he's not darting around like a monkey with electrodes on its balls, Yorke is leers into the on-stage cameras, stretching his face. 'You And Whose Army', as one can imagine, goes down a treat at the end of a set spread across all of their records and all that's missing is a some hills and campfires. Still, there's only one better way to experience Radiohead.

The evening comes to a close in the Mojave Tent with Dick Valentine's overblown disco parody. Electric 6 swagger around enough, but musically they’re all over the place. They don’t seem to only get people are only there for ‘Gay Bar’. It’s truly shite.

There could be no better way to carry on the party though, than with MF Doom over on the Outdoor Theatre. The sometime emcee/producer, sometime three-headed alien-lizard (the guise he undertook for his recent King Geedorah LP) brings together a lush mix of laid back grooves and futurist beats. Musically, it's all sci-fi themes and sky-high melodies, and his stage show is first rate. It's further testament to the kind of boundary bashing that the likes of Big Dada and Ninja Tune are capable of. Still, if you prefer D12…

Or maybe a bloke with a giant afro wearing a mouse suit? By the time Danger Mouse took to the decks at the URN Magazine party, even a Kelly Osbourne striptease couldn't have dampened proceedings, such was the atmosphere. Suffice to say, it's all a bit grey.

Sunday is a very good day to be English. While early-afternoon draws like Elefant (Mojave Tent) and Broken Social Scene (Outdoor Theatre) are inoffensive enough, it's the mighty white-shirted Muse that make people stand up and take notice. Only in American could you see them in blazing sunlight, dousing the Coachella Stage crowd in their trademark operock. Muse aren't massive in the USA, but with their last tour a sellout, this will change.

Alongside the straight pump of 'Time Is Running Out' and the frantic 'Stockholm Syndrome', 'Sunburn' aptly sums up proceedings as Muse prove they're not deterred by playing in daylight. Major-label metallers Thursday should not play at all. Following a band like Muse is never going to be easy, especially when you're this shit.

The Thrills are pleasant, if not exactly thrilling, and after a bit of a mid-afternoon boogie in the Sahara Tent with everyone's favourite shifty disco, 2 Many DJsthe most surprising privilege is The Cooper Temple Clause who pull out their best performance in three years.

Fired up beyond anything, the Coopers really pull it out of the bag, mixing up 'Been Training Dogs' with some of the better new tracks, like 'Blind Pilots'. They strangely omit 'Who Needs Enemies?', but amid the snarling pouts and grave-raiding riffs of set-closer, 'Panzer Attack', America gets a fine taster of how good it gets.

Dizzee Rascal's dyslexic, text-message hip hop must be going right over our head, because frankly, it sounds shit. But the Mojave Tent is even more rammed than during the Coopers, so clearly many people are suckers for Brixton's favourite Memphis Bleek wannabe. Instead, we take our venomous pen to watch Belle & Sebastian, only to be charmed by one of the most obliquely beautiful performances of the weekend. Only The Cure pull a bigger crowd.

So drawn are we to the self-effacing magnetism of Stuart Murdoch (looking more Trainspotting Ewan McGregor with every arm-stretch), that we almost miss Bright Eyes at the Outdoor Theatre. The crowd seem split between deciding whether it's Stuart or Conor Oberst who's the new spokesman for indie, and in terms of cool, you'd be hard-pressed to outdo Oberst and his acoustic-rock mob of sweaty heartbreak.

Those not wishing to be bored to death by BRMC lie themselves down to watch the sunset over Air's Coachella Stage performance. It's as blissfully perfect as you'd expect., with 'Playground Love' simmering away and 'Kelly Watch The Stars' positively soaring. Air's meticulous set-up boasts even prettier lasers than before, although with more guitar-fronted songs, it resembles more an indie band, and is all the better for it. Their ambient synths and exotic melodies are the perfect setup for the final few hours.

Mogwai are undoubtedly worth a slog over to the Mojave Tent, although sadly they're let down by an appalling mess of stage sound. What should be blissfully controlled bursts of venom come across as messy tirades of noise. Their stoner mud-rock comes out just a little too muddy. Still, at least it's more interesting to watch than that twat (Wayne Coyne) from The Flaming Lips spend the best part of an hour setting up a stage stunt.

Over on the Coachella Stage, The Flaming Lips assert their allegiance with style over substance by spending so long getting their singer into a huge plastic bubble that they barely play three songs before The Cure. Coyne proceeds to surf the crowd inside a huge bubble, while Jack Black tramps around the photopit. Ask those at the front whether it was worth it.

Looking even crustier than Pixies, Robert Smith looks a frightening mess arriving twenty minutes late. But when your setlist reads like The Cure's, you're entitled to have spent the last fifteen years consuming cocaine and pies. Songs like 'Pictures of You' bring tears to people's eyes, while 'Love Cats' and 'Boys Don't Cry' wrap up their set in magical awe.

It means that over in the Mojave Tent, where Ash are wrapping things up, there's a lot more space to dance around. And with Meltdown in full force, that's exactly what we do. New tracks like 'Orpheus' and the magical 'Starcross'd' revel in Tim Wheeler's eternally melodic sweet tooth, while tracks like 'A Life Less Ordinary' and 'Girl From Mars' provide the same retro-warmth as crusty old Robert Smith and co.

While you don’t have to fly halfway across the world to see the likes of Pixies, The Cure and Muse, you do if you want palm trees. Apart from Glasto, Coachella was the best festival we’ve been to. In terms of line-up, organisation, value and all-round quality, it was all first rate. Magical performances, a great attitude among the crowd and a mix of the best new bands and the best bands that ever were. The only thing that comes close is Benicassim. We’ll see you on la costa!