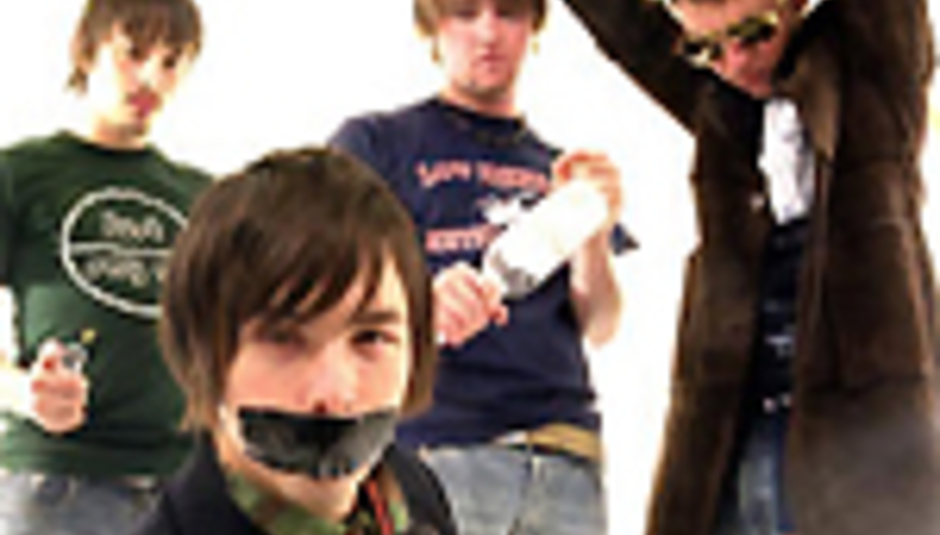 by Anthony Gibbons April 18th, 2004
Newcastle’s Jetson are an unpredictable, volatile, and mad yet loveable mix of hair, hormones, alcohol, and attitude. As you read this Jetson will be hurtling around the UK in a rusting transit van from a base in deepest Woking where they will play every single toilet venue on the circuit, drinking other people’s beer, smoking their cigarettes, chatting up anything female with a pulse, and, as you will read, drinking the occasional pint of piss topped off with a goldfish or two.

Jetson have just released their, ahem, ‘explosive’ new single ‘Social Hand Grenades’ through The Band Agency Records, a label formed as part of a nationwide initiative to promote and encourage unsigned bands. DiS went along to Peterborough (of all places) to meet Jetson, and seeing as it was Good Friday we took some hot cross buns with us too.

DiS: So, who are Jetson?

How did Jetson get together?

Ali: “Me, Bruce and Dave all met at Sainsbury’s where we used to work.”
Dave: “The three original members all met there but we’ve been dropping drummers at the rate of one year for the past three years. The new one’s alright though.”
Ali: “We had to let one drummer go for touching Bruce’s bum.”
Alex: “I haven’t had the pleasure of touching Bruce’s bum but I’m working on it.”

What inspires you to write songs?

Ali: “The hatred of nine to five work and a fear of working in call centres.”

“You’re drunk and you’re dirty”. Who’s this written about then?

Ali (pointing to Alex): “His mother. Not really. It sums us and our friends up who take every opportunity to get off our tits and forget about the horrors of life like debts that kind of thing.”

Is it true you wrote a song in tribute to Liam Gallagher’s tattoo and if so why?

Ali: “When I was on a dinner break at Sainsbury’s I was flicking through the paper and there was a picture of Liam Gallagher’s tattoo which said “Taking Care Of Business” but we didn’t know Elvis had one too until months after we’d written the song. We had to change the name of the song to ‘Heart Attack’ and take out the chorus because Radio 1 were taking the piss saying we were an Elvis tribute band.”

I hear Chris Moyles is a fan. How does it feel to have such a superstar backing the band?

Bruce: “Superstar?”
Dave: “It’s the first I’ve heard of it!”
Bruce: “It’s good to have coverage like that but it doesn’t do much for our ‘street cred’.”

Tell us about the music scene in Newcastle. Who should we be looking out for?

Bruce: “There’s a really good music scene in Newcastle, there’s a lot of experimental bands as well as rock ‘n’ roll ones and a lot of people go and watch live bands big or small. It’s quite inbred because everyone goes and sees each others gigs.”
Dave: “There’s a group of bands where everyone knows each other and once one band gets signed then the whole scene will start getting interest from labels.”

How difficult is it to get attention from the music press and industry as a whole?

Ali: “You feel as though you have to gravitate towards London to get any kind of interest, it’s almost compulsory.”
Bruce: “People don’t realise how much is going on in Newcastle, people only see what’s happening in London or Manchester.”
Dave: “Yet when we play in London we end up getting 20 or 30 industry people on the guest list but I wish they would come and visit some time!”

Who wears the trousers in Jetson?

Ali: “Our Bruce, he’s got a penchant for dressing up in skirts.”
Bruce: “Especially when I’m drunk.”
Ali: “He’s got lovely legs.”

What’s the most rock and roll thing you’ve done?

Dave: “Alex drank a pint of Bruce’s piss, no bet or anything.”
Alex: “All bands do it. Kylie Minogue drinks her sister’s piss on a regular basis. I’ve got the video…”
Ali: “Bruce ate a goldfish. It was still alive but pickled in vodka.”
(Del, Jetson’s manager, later explains to DiS that one of the boys decided to buy a goldfish before one of their London gigs, complete with glass bowl. Del only found out about this when he went back to the van to pick something up and found the bowl gaffa taped to the floor inside. Del was insistent that the fish had to go... so Bruce ate it.)

What does the future hold for Jetson?

‘Social Hand Grenades’, the stellar new single from Jetson is out now on The Band Agency Records. Read the DiS review HERE.