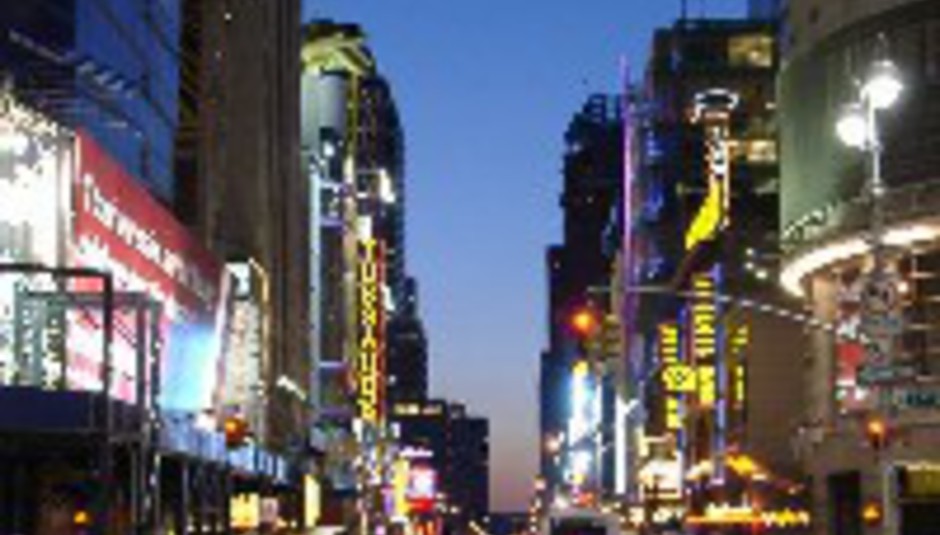 Slack-Jawed In The City

Slack-Jawed In The City

by Gareth Dobson March 27th, 2004
Personally, I think that Travis Bickle was just a bit of a psycho. I mean, who could be driven crazy by New York City? Although having said that, I think that the general taxi-cab driving population of Manhattan is fucking crazy. Who would want to drive in this zoo?

To be driven by one though, is an entirely different matter. That’s pretty exhilarating. The experience of which is sort of a cross between the angriness of the London cabbie and the breakneck traffic-facing audacity of the French taxi madman. Or then again, you could take the subway, stop at Grand Central and gawk at the breakdancer, Michael J impressionist and fat bloke all busting a move to ‘Gotta Be Starting Something’. It’s wondrously inept.

Hello there. I’m in New York. It’s great, and I recommend it to anyone with a pair of eyes, set of feet and a couple of ears. What’s the point of this self-indulgent piece of travelogacy? Dunno. It seemed kind of cool at the time. Sure, it’s nothing new to pronounce the virtues of the City That Never Sleeps tm, but then again, it’s different for everyone isn’t it? Indeed.

Right now, I’m sitting in Brooklyn – Williamsburg to be precise – in my brother’s apartment, being pawed at by the gayest dog in the history of caninedom. The pooch isn’t my brother’s. Williamsburg is sort of like the Hoxton of New York – sitting just outside of the hub of NY, it’s the hipster home of Bohemian drop-outs, part-time Deejays, and fulltime coffee shop employees, all of whom work at WiFi- installed outlets called things like ‘Verb’, where fellow-minded people sit in their neon-striped socks and read books about Tibetan couture. Wburg, as I have named it, is home of a rather nifty little venue called Northsix. Being that it’s on North 6 avenue. Later tonight, I am going to sample the delights of the Fiery Furnaces whilst sipping on an outrageously priced beer and constantly re-adjusting my newly purchased Von Dutch hat. Cool Cat nirvana.

Previous to this, as my third full day in land of S-JP et al comes to a daylit end, I have been traversing the belly of Manhattan and trundling through both the East Village and Greenwich Village, located at the bottom east and west corners of the borough respectively. Unsure as to whether I should be overtly English (“May I have a cup of tea and a copy of the Kink’s ‘Village Green Preservation Society’ please”), or inconspicuously trans-atlantic (“Let me get a bagel with cream cheese. Yeah, sour dough, sure”). I’ve mooched along in a little observational world of my own, ipod earphones keenly glued into their intended holes. Am I in a New York state of mind? Haven’t got a clue, but it’s less ethereal than my experience of Japan. Courtesy of 'Lost In Translation', of course.

Political comment of the day; oh my god, the NYPD are complete wankers. Shunted onto the street in an attempt to make the native New Yorkers feel safe in the light of Al Qaeda madness in Spain, they appear to simply walk around pissing people off, being over-bearing and heavy handed. As I sauntered past the nicely atmospheric Union Square (skate kids listening to hip hop and trying to steal cigarettes off of me), I saw a CNBC news crew focusing their cameras on a large banner that read ‘STOP THIS POLICE STATE’. I was tempted to go and join the farrago. If I wasn’t so scared of the boys in blue coshing me over the head with their large batons and then pistol whipping me with their even larger pieces. And don’t even get me started on the smoking thing. Still at least the social rhythm now reads ‘beer, cigarette, complaint, beer, cigarette, complaint’, rather than everything at once. Surely good for our livers, non?

Plus there’s my new belief that you can always trust a native Manhattan-ite who likes a tab. So it’s not all bad. Just mainly bad.

Next time; Brutality on ice, Welsh =emo= hits Irving Plaza, and why going to The Gap in New York seems so much less terrible than going to The Gap in London. Plus; The Wrens, Janet Jackson, why Franz Ferdinand are so hot in NYC and Englishmen in bars watching soccer games at 9am.

Pop Art: Soundtrack
Neil Young: After The Goldrush
Pavement: Terror Twilight
QOTSA: Songs For The Deaf
Funeral For A Friend: Casually Dressed Deep In Conversation
Ryan Adams: Gold
Ninja Tunes: Zen Retrospective
Mogwai: Happy Songs For Happy People
The Postal Service: Give Up
Radiohead: Kid A
Bob Dylan: various
The Pixies: Death To The Pixies
My Morning Jacket: It Still Moves
The Still: Logic Will Break Your Heart
Breeders: Best Of
Jesse Malin: The Fine Art of Self Destruction