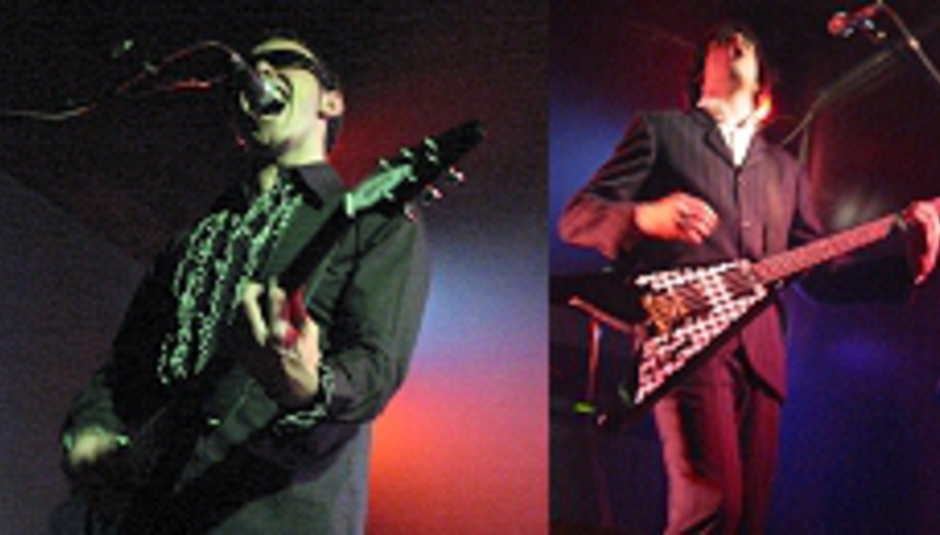 by Ross Bennett February 7th, 2004
“Our songs are short and to the point, ya know?” And so Manchester based three-piece Karmakops head back to the studio then off to their soundcheck. Prior to this departure, DiS managed to have a good few pints and a natter with the best quirky, rockin’, boppin’ bunch of songsmiths around.

“The first song I remember writing was when I was 15. It was called ‘Rock n’ Roll Kingdom’.” James Docherty (lead vocals/guitar/shades).

Two titles that have nothing to with Karmakops' current feisty barrage of hard hitting, melody infused gems. Although when you think about it, as Jamie agrees, “‘Warrior of Death’ does sound interesting.”

DiS: So it can’t have been too long after the conception of these mighty slabs of rock n’ roll history that Karmakops came into being?

James: Nah – we’d all been in loads of bands before. Me and Jamie met years and years ago in Leeds. But we’ve all always played music and we’re always writing songs.

And this brings us to the first point of potency that surrounds Karmakops – the rate of tune churning.

How many fully formed songs do you think you’ve got?

James: Seriously. We tend to write really quickly – we have so many riffs flying about – so many melodies – that when we individually come up with ideas each one of us will have a hook or a lick already there to throw into the song and give it that necessary edge.

Still unconvinced, I’m promptly handed an eighteen track demo tape. Listening to the tape a number of times later in the day, hearing the sheer quality of every single song, it seems “fuckin’ hundreds” might not be too far off the mark.

So what have you guys been listening to recently?

James: I like Muse – but his voice grates after a while. I’m getting back into a lot of Bowie at the moment. Oh, Cooper Temple Clause are alright.

Mark: James is the ‘prog’ man of the band.

James [hastily]: Music is constantly surging forward. Since a bird first whistled a tune, it’s been pushing forward in varying forms. I’m into lots of different things – rock, jazz, classical… But they’re still only so many notes, ya know?

Mark: It’s all about whether you can shift someone emotionally. Even if you get a rise out of them cos’ they not into what you’re doing, at least you’ve made them take notice. Being labelled as just ‘alright’ is one of the worst things that can happen to a band.

And after last year’s triumphs on the fringes of ‘In the City’, their London debut, and a support slot with Stereophonics in front of 4000 people all safely tucked under their belts, ‘just alright’ is far from applicable. “There’s something pretty intense about seeing 50-foot projections of yourself playing the guitar in front of thousands of people,” quips James remembering the moment the lights went up on The ‘Kops at Hull Arena last November.

How did you all feel knowing that in a matter of minutes you’d be playing to 4000 people who have no idea who you are?

Jamie: Actually, I can’t really remember that much about it. We only got the call to say we were doing the gig at 11 o’clock the night before, so the whole 24 hours was a bit of a blur – it went too quickly. Though once we hit the first note, we all felt really comfortable – from then on it was f**king class! Simon Ashby (manager/bowler hats): The funniest thing was seeing thirteen roadies standing there waiting to unload all the gear when we arrived – the doors went up – and all there is is this little blue transit van!

Compared in varying parts of the press as combining the best parts of The Who, The Kinks, AC/DC and Electric Six all neatly filtered through a crafted, individual, harmony crunching sound, Karmakops’ energy for delivering songs they love to play is clearly evident.

James: We don’t necessarily set out to write these three minute singles – it’s just the way it’s gone so far. Ultimately, we want to write songs that we would want to hear if we went out to a gig or bought a new record.

Mark: If we’re enjoying ourselves on stage, our job’s pretty much done – if it’s doing it for us, then hopefully the people at the gig will get it as well.

And ‘get it’ people have. The influx of A&R into their rehearsal space during ‘In the City’ confirmed that – after two days and four cab-loads of industry – songs such as ‘Girl Like You’, ‘Creatures’, ‘Not my Problem’, and ‘Come Back to Me’ were on the tip of everyone’s tongue.

James: It’s a good buzz at the moment. They’re very wary of each other – won’t say anything in each other’s company – but as soon as they’re on their own, they’re on the phone going: “That was f**king great, best thing this year!”

With the Christmas break now well and truly over, Karmakops have been rehearsing and writing at lightning pace. Live they come across drilled but edgy, and if their demo is anything to go by, on record they will deliver a perfect selection of cut-glass melodies and boisterous swaggering rambles.

Mark and Jamie: We’re gonna call our first album ‘Karmakops’ Greatest Hits’ – every track could be a single!

In 2004, that might just be what the doctor ordered. Having already had a two-page spread in the Scottish Sun, radio plays on Steve Lamacq’s 6 Music show within the last month and a short tour planned for the Spring, the future is looks bright.

As they leave, James recalls a few memorable moments from the band’s stay in London. “We all went down the pub for a beer last night. We’d been in the studio for three days – I’d been singing for 10 hours a day and just wanted to sit down and have a pint. These two arseholes came over, and starting mouthing off – as usual for no reason at all. They were off their tits and started throwing glasses at the barman. One of them started calling me a sweaty sock. I wasn’t in a good mood anyway, so I hit him.”

“Short and to the point”, indeed.