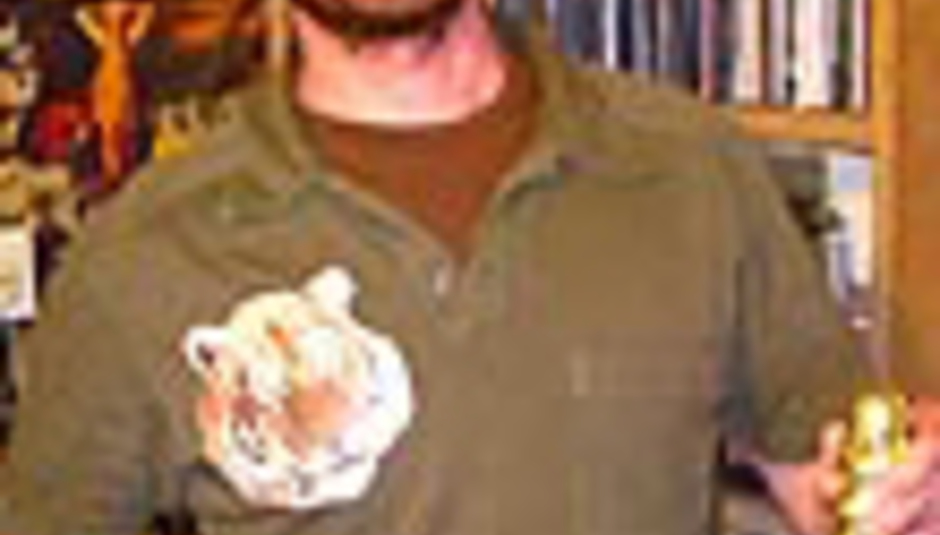 by Anthony Gibbons January 7th, 2004
Dogs, dying, duelling guitars, and a choir are just some of the treats in store on ‘Jesus Songs’, the new mini album from Cambridge country-punk heroes The Broken Family Band. Frontman Steven Adams (he’s the one on the right in the photo with the scary beard!) emailed DiS to tell us all about it...

Adams said he wrote many of the album "When we first started and we made a decision to keep 'em all together". He insists though that "we're neither taking the piss nor singing songs of praise, it's somewhere in between."

The self-produced 'Jesus Songs', due for release on March 15th through Track & Field, was recorded in three days flat fuelled, said Adams, by Belgian beer with Leffe ale, as the photo shows, a particular favorite. It includes contributions from Gill Sandell, Inge Thomson and Timothy Victor, who produced the band’s first two albums ‘The King Will Build A Disco’ and ‘Cold Water Songs’.

"Inge Thomson," wrote Adams, "is a musician and singer from Fair Isle, and sang on the album a fair bit - she has one of my favorite voices, so it's always a thrill to work with her. Timothy Victor played banjo and sang, and our good friend Gill Sandell played accordion on a couple of tracks. Oh, and there's a choir on there as well!"

Adams then kindly gave DiS the full track listing for ‘Jesus Songs’ with a description of each track as follows:

"This was probably the first song we ever came up with for the band. We were always really taken with the idea of basing a song around one chord, and we wanted to make it a bit menacing. It's about dying."

"Do we write too many songs about waiting around for people? Well they should fucking hurry up then. It was about time we did a song with ‘duelling’ guitars."

"Neutral Milk Hotel made two beautiful albums, and this song is one of the best. We asked Jeff Mangum if he minded us butchering his song and he said "Erm, that'd be ok I guess. Quite nice even." We don't know what it's about."

4. ‘Walking Back To Jesus Part Two’

"A live favorite, which means we get sick of it periodically and speed it up. By the time you read this it'll sound like Minor Threat. Tim's banjo rules. It's about not being able to shut up."

"Adams, Johnson and Roman recorded this song live with a couple of microphones, so drunk on Belgian beer they could barely sit up straight. Everyone else was added afterwards. It's about a real person."

"Man looks out of window one morning, sees attractive lady snogging ugly bastard with fancy motorbike. Writes song which he hopes will one day feature in West End musical. It's also about dogs."

7. ‘Walking Back To Jesus Part Three’

"Adams and Williams decided during the course of a particularly boring car journey that it would be fun to get a Welsh Male Voice choir on a record. We don't have any money, so we got a local choir instead. It's about trying to be a good person."

Adams went onto say The Broken Family Band’s plans for 2004 include: "Recording a few songs for a split EP with Radiogram from Canada for a great Canadian label, Endearing. We just started work on a new album, and getting some of the darker shit out of our systems. Hopefully we'll play a few festivals in the summer, and try to get out of the UK for some dates if we can."

Prior to the release of ‘Jesus Songs’ The Broken Family Band tour with Herman Dune throughout January. The dates are: