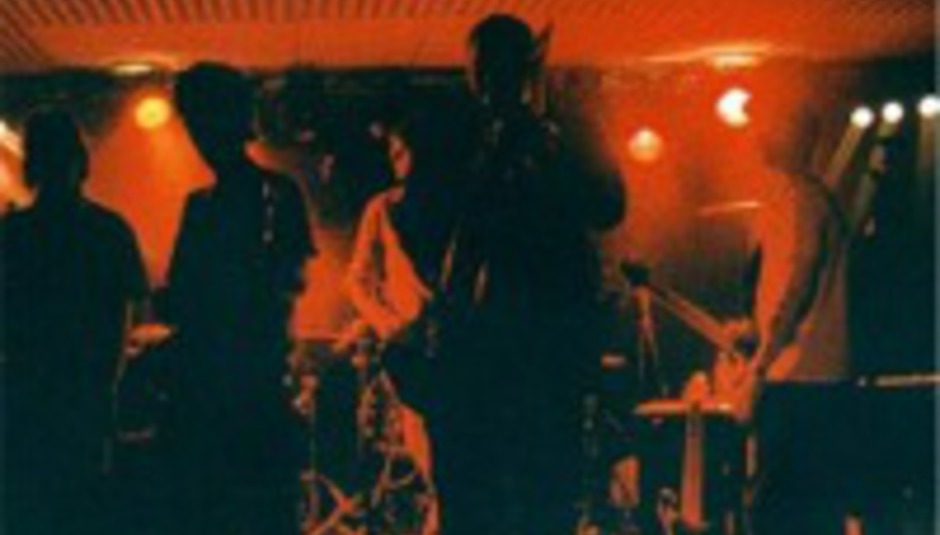 by Gareth Dobson November 28th, 2003
Hooker's Green #1: A sprawling, twenty-legged musical collective based around the talents of core songwriting duo Neil and Nick, the band came to prominence in late summer when an astounding 'demo' (if you can call it that) CD began circulating around smaller labels and fanzines. The contents of which led to invitations to play various shows in Scotland (they're loosely based in Aberdeen) Manchester's In The City and a three date residency of London, all in the autumn of this year. The live show baffled and astounded in equal measures, but it's the quality of a clutch of self-recorded tracks that really mangled the brain. One infatuated label head described their work as 'by turns, haunting, studious, abstract, quaint, scatty, powerful and, quite frankly, amazing'.

And without summing anything up, that just about sums it up. For a more musically descriptive affair, think a jazz-obsessed, more-twisted Flaming Lips, with dark orchestral manoeuvres. Truly wonderful music. The band's 'Captain Moon...' mini-album/LP/EP will find it's way into record stores in the first half of next year. Somehow…

We chucked some stock Q&As at Hooker's Green #1, and here were their replies…

1) Who the hell are you?
We are hookers green no.1, a band from a small ghost town. We spend our entire time talking about music, recording music and playing music. We can't dress ourselves properly so this is what we do now.
2) Why should we be listening to you?
Because we believe passionately in what we do. We aren't the weekly emo. We aren't the hipster elite. Imagination is a sorely underrated tool in the creative industry at the moment and its something that we believe in more than anything.
3) Why haven't you been signed yet?
We're hoping to release a record this spring - we've had interest and offers in various forms. Besides, I could start a record label on a gambling debt in prison, draw up a contract on my cellmate's hanging corpse, sign it and then boast that I'd been signed. It just wouldn't mean anything beyond being able to say that I'd been signed.
4) Who's going to sign you?
Someone that believes in what we're doing as much as we do. It's a religious thing for us.
5) What's going down between now and spring?
We're playing some dates in December, February and Easter. Or that's the plan. We're releasing our mini-album / shambles / concept record 'on how the illustrious captain moon won the war for us' too, and hopefully we'll have an EP out a wee bit later. We're also planning on shooting a video for a song off the mini-album and having it streaming nicely off of our site when we move to the .com domain we've been promising ourselves for years. Finally, we'll be spending a lot of time scaring ourselves in woods.