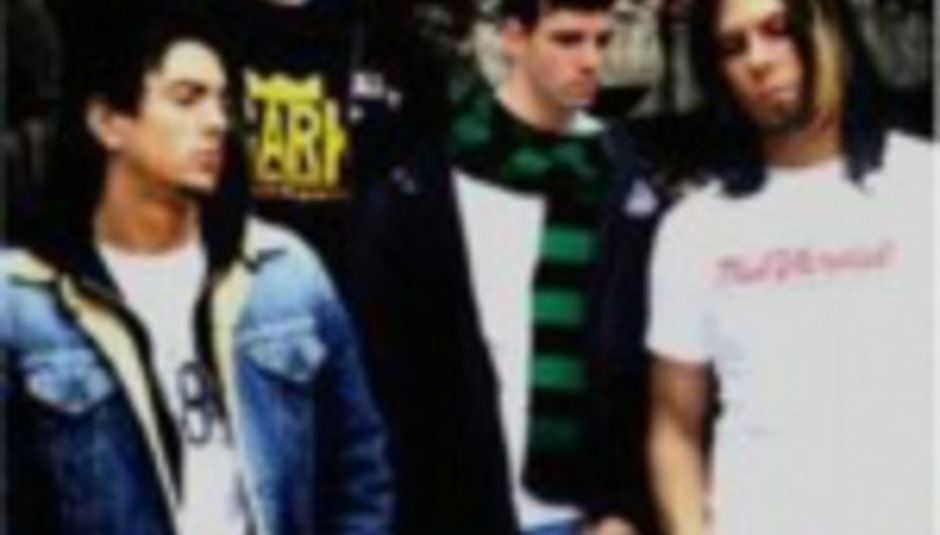 It’s a sad fact that many people despise the trendy Welsh post-hardcore-metal outfit known fondly as LostProphets and less fondly as “that fucking Welsh boy band with guitars”. It’s true! Think how the band must feel though, going out and playing their soul away on a stage constantly besieged by devoted followers just begging for a hug or a kiss or ‘some skin, dude’, and then coming away from that to a barrage of Hate Press and Hate Mail and hopefully some filthy groupie slut who wants some Hate Sex. I nabbed an entire third of an hour with the hair loving Jamie Oliver (keyboard wizadry and backing vocals), delightfully calculating Ian Watkins (singing), silent Mike Chiplin (drums) and the angry, angry Stuart Richardson (bass).

When gently quizzed upon the response they affect among people, Ian was mightily diplomatic at first, explaining that “just as many people don’t like us as people that do like us…that’s just the nature of the beast. If you don’t like us, that’s cool; that’s your opinion.” Luckily Jamie left his hair alone for long enough to point out the flipside: “But people HATE us, though,” adding the good reasoning that “Haters are just much more vocal about hating than lovers are about lovin’… because if you like something you don’t go running around shouting ‘YEAH! I LIKE IT!!’ but if something bugs you…” Quite. That mini-outburst made Ian go on and on and on for about 3 minutes about some people in menial jobs who aren’t following their visions and living their dream. Or some similar bollocks he thought he should say.

A lot of people called you names for cancelling your Carling Weekend appearance late this summer. Why on earth did you do that?

Ian [frankly]: “The album was 80% done. We could’ve stopped recording and flown home while the studio was on hold. Our crew were on god knows how much a day and then there were the flights there and back.”
DiS [slightly disgusted]: So it was all about mon…$$$
Jamie [disaster mitigatingly… sort of]: “Also the album was meant to be out about that time. It would’ve made sense to come all that way and put all that effort in, to support the album launch but it woulda been a pain in the arse to come over, do all that and then find out that your album’s not coming out for another 4 months.”
DiS [slightly confused now, too]: But wouldn’t you know if… but… so it wasn’t worth doing it just for your fans…?
Ian [realising it’s not all meant to be about money]: “It was worth doing things properly because this might be our only chance to do a big album. We might be dropped next year – you never know.”
With this damning evidence, some more people might be getting added to the list hoping for just that to happen.

But talking about the album…
Ian: “We just spent three months in our rehearsal space just hanging out, jamming… doing crack. After three years of playing the same shit we just had so many new ideas.”
Jamie: “We had loads of songs, which we’d been writing since the last album came out but we decided to start with a clean slate the day we went into the studio. We let them form organically. It’s three years worth of growing up. We have a better understanding of ourselves and I guess after three years we’re a bit better at playing than when we started.”
Yeah, about that. We’ve waited an age for this new record. It has taken a while for you to pull your collective finger out. Three years!
Jamie [playing with his hair again]: “We’ve kept going because it was new to everyone outside the UK after two years so it served us well over the past year. We toured the album around America and will be releasing it here and there at the same time. So it will feel like a better continuation for them.”
But not for us. For us, it will have just taken ages.

How important is it for you to be popular and successful?

Ian: “It’s important in that it enables you to have a career and anything above and beyond that is a bonus. Longevity is the key.”
Jamie: “You want respect for what you do. With anybody doing a creative art, they want to share their ideas with as many people as they can. Popularity is not the main drive. The main drive is cocaine. [worryingly they speak of evil drugs, again] It was crack…we’re connoisseurs.”
Ian: “Ultimately if you believe in what you’re doing, it doesn’t matter whether other people like it or not. Obviously if people like it, it’s nice but if they don’t like it, I do!”
But if they don’t like it, they won’t buy it and so you won’t have a career. Or any sort of bonus. Or any sort of contract. Or drugs.

Long gone are the studded belts, white skate shoes and vests of yore. Now it is the time for mesh caps, decorative sweatbands, belts fastened at the hip and wonky 90°-shifted mullets. While I pondered their mightily agreeable dress-sense, I was compelled to ask them why they looked like such ponces, Ian probably didn’t even get all defensive on my ass when he said “We’ve always been poseurs - regardless of the band, regardless of the music! Before we were in the band, we cared about how we looked. Bands like Atreyu are way more fashionable than us. Glassjaw are the biggest fashion whores you’ll ever see – they’re sponsored by Diesel!” But for me the real answer came from Jamie: “Some people don’t care, and some people care a bit more than people that don’t care.” Right.

With a potential hotbed of hardcore-lite kinda bands popping up all over South Wales, the Scene Phenomenon seems to have found it’s next destination after scurrying all over the leafy suburbs of Aldershot. With Funeral for a Friend whacking their shit all over the charts and a full gamut of bands with varying levels of Screamo, I pondered the reasons behind this current export frenzy and Ian said, “Growing up in Wales you don’t get the bullshit and hype of the London media scene and so a lot of the big city bands get caught up in that too early and then get bad attitudes etc. All these Welsh bands come from the same place as us – small dead-end towns – and the only way to get out is to form bands which I think is a drive to do it.” That sounded pretty reasonable to me so I stuck my bottom lip out and nodded in the way that you do when you agree with someone.

The thing is, just seconds earlier I had witnessed a tirade of insults directed at somebody… possibly me… possibly someone else. It wasn’t clear. To anybody. All I’d done was say something like:
DiS: “So you’ve gone all screEmO, now? Is that just cashing in on the latest trend to take the charts by storm?”
Jamie [laughing]: “We were always screamo!”
Stuart [muttering angrily to the floor]: “What the fuck is screamo. That’s the gayest shit I’ve ever heard in my life! Fucking journalists - cunts - have to fucking label. Fuck that. What a wanker! Fuck me if it’s screamo. You’re as bad as the NME. Wanker. Fucking cocks.”
I thought the jibes were slightly harsh but he left very soon afterward – still muttering, incidentally.

The LostProphets are coming over to tour with similarly initialled Linkin Park rather soon. Hopefully, the LostProphets album is going to come out in April. It's meant to but I ain't gonna be holdin' my breath. Cos I might die.