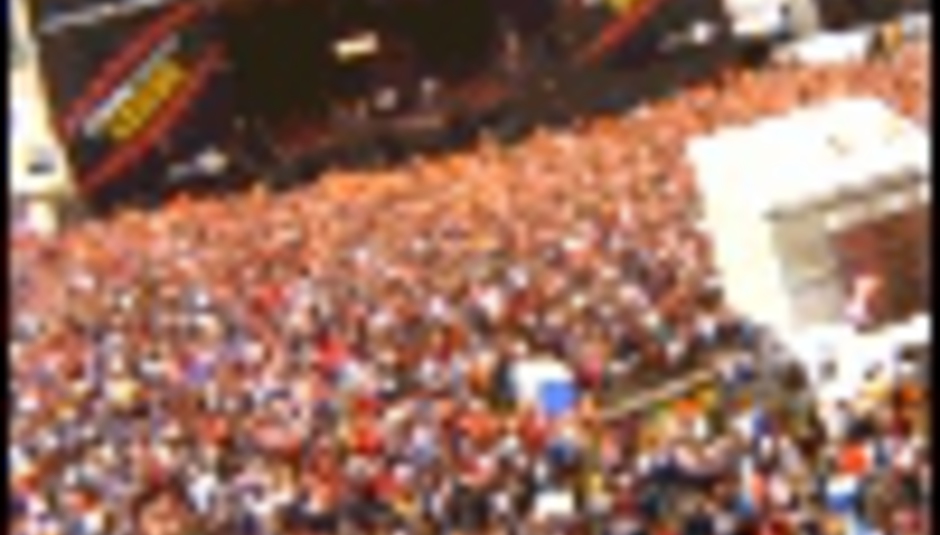 by Raziq Rauf August 28th, 2003
So we got the motor/rail equivalent of a slave boat and packed in as many DiS writers as we could [Sean Adams, Ollie Appleby, Gareth Dobson, Ellen Forster, Andy Future, Matt Gregory, Mat Hocking, Sara Lovejoy, James Meehan, Ed Mellett, Kate Price, Raziq Rauf, Ollie Russian, Jo Sutton, George Terry, Peter White, Gen Williams]. Their Land of Glory held their love. Their destiny was to see as many/few bands as they could and drink/ingest as much badness as possible. There is no healthy alternative folks. There will be no other reviewing quite as frank, bordering on bitchy and emotionally scarred as this.

Handy keyboard tip Press Shift as you click the link to open in a new window.

We shall begin our tale with the Carling Stage where the 'new' bands make a name even though there wasn't a single band that I, for one, hadn't heard of. I guess that's why it ain't been called the New Bands Tent for about 5 years. Winnebago Deal, The Hiss, Evan Dando, Colour of Fire, Har Mar Superstar and his bitchez are featured in hither.

There was a superbly undersized tent that changed half way through. A Punk, Hardcore & Emo sandwich in a moist, thick sliced Dance bread. Pennywise, Blackalicious, Funeral for a Friend, Poison the Well and Gold Chains all had their time.

The insatiably loud Evening Session Tent played host to established bands that pull the crowds and deserve a finer sound system than even the main stage such as Elbow, AFI, Hundred Reasons, Hell is for Heroes and The Music.

How can you differently describe The Main Stage? This is the main event. This is the source of real entertainment. It's where the timid become entertainers. Albeit very, very bad ones. This is where the fest comes to a grimy pustule of a head and the reason you are prepared to sit upon chips and chicken bones for several hours of the day. Just to see the greats, old and new, such as Metallica, Good Charlotte, System of a Down, InMe, Cave In and Blur.